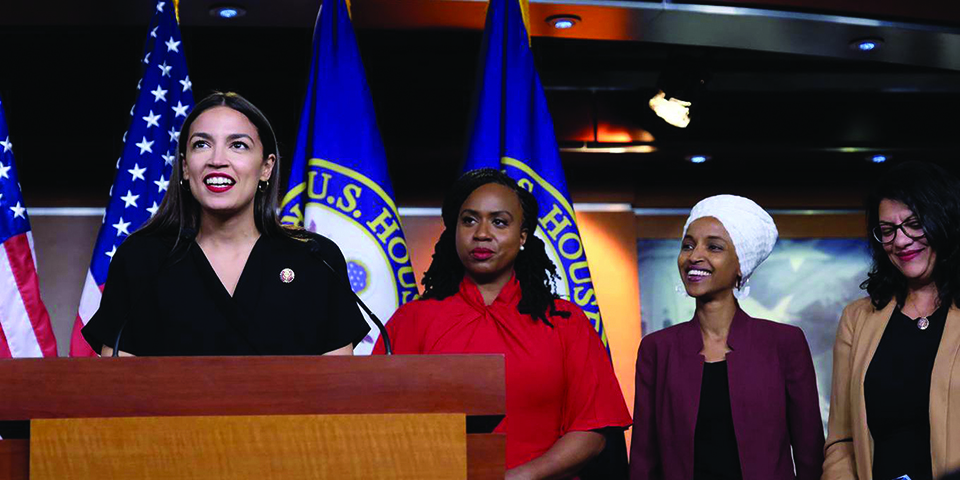 In today’s world, men continue to hold disproportionate power. But, judging by the fast-growing number of women on the political stage, the days of male supremacy are numbered

MOSCOW – US President Donald Trump’s recent declaration that four Democratic congresswomen of color—Ayanna Pressley, Alexandria Ocasio-Cortez, Ilhan Omar, and Rashida Tlaib—should “go back” to their countries was another reminder of his blatant racism and sexism. (Three of them were born in the United States, and the fourth became a US citizen as a teenager.) But it also highlighted the rising profiles of women in politics—a trend that will continue, no matter how much it terrifies insecure men like Trump.

A century ago in Europe, leading suffragists—such as Inessa Armand, Rosa Luxemburg, and Clara Zetkin—had little choice but to seek powerful men to validate their aspirations. One such man was Soviet leader Vladimir Lenin, who advocated the elimination of “old laws which placed woman in inequality in relation to man.” Armand was (allegedly) romantically involved with Lenin, and Zetkin interviewed him on “the women’s question” in 1920, following his 1919 speech on the “tasks of the working women’s movement in the Soviet republic.”

This approach was understandable, but it proved ineffective. Lenin insisted that only socialism – with its promise of equality for all—could liberate women. “Wherever the power of capital is preserved,” he declared in that speech, “the men retain their privileges.”

But, while over 80 percent of women in the Soviet Union aged 15-54 had jobs (as of 1983), few had careers. During the Stalinist era, women were explicitly told to return to the “family front.” My own grandmother was forced to give up her position as an educator after my grandfather, Nikita Khrushchev, was appointed the head of Ukraine’s Communist Party in 1937. She was supposed to serve as an example for other working wives of political functionaries.

Today, not only are there very few women in Russian President Vladimir Putin’s government; their roles are largely ceremonial. Tellingly, in a country where domestic abuse kills a woman every 40 minutes, on average, an amendment decriminalizing some forms of domestic violence sailed through the Duma (Russia’s parliament) in 2017, before being signed by Putin.

By contrast, while many European democracies lagged behind the Soviets on women’s suffrage—Belgium, France, and Italy granted women full voting rights only in the 1940s—they have turned out to be far more conducive to women’s professional rise. Forty years ago, British Prime Minister Margaret Thatcher, though often inflexible and dogmatic, helped to break the proverbial glass ceiling. And, in the last 15 years or so, the ladder has gotten higher—and more crowded—than ever. Angela Merkel has become Germany’s third-longest-serving chancellor since becoming the first woman to fill that post in 2005. Another woman, Annegret Kramp-Karrenbauer, currently Germany’s defense minister, is likely to succeed her in 2021.

The surge of women in politics spans Europe—and the political spectrum. Dalia Grybauskaitė, Lithuania’s own “Iron Lady,” who became her country’s first female president in 2009 (she left office this month), holds center-right views but is not affiliated with any political party. The conservative Erna Solberg, who became Norway’s prime minister in 2013, has managed to strike a balance between libertarianism and the welfare state. Yuliya Tymoshenko twice became Ukraine’s prime minister in a political environment saturated by male chauvinism.

The liberal-conservative Kersti Kaljulaid became Estonia’s first female head of state and its youngest-ever president in 2016. And last month, the social democrat Mette Frederiksen was elected as Denmark’s youngest-ever prime minister, and the second woman to hold the office. Meanwhile, another powerful female politician, the nationalist Pia Kjærsgaard, who co-founded the Danish People’s Party, resigned as the speaker of Denmark’s parliament after holding that post for four years.

Yet another far-right party, France’s National Rally (formerly the National Front), also has a woman leader, Marine Le Pen, who in 2011 succeeded her father, Jean-Marie Le Pen, with the goal of making his extreme views more palatable and broadening the party’s appeal. Likewise, former British Prime Minister Theresa May was tasked with cleaning up the mess made by her male predecessor, David Cameron. Having called the Brexit referendum to appease the Euroskeptics in his Conservative Party, his only choice was to resign when the vote didn’t go his way. May, who also opposed leaving the European Union, was somehow supposed to make it work. (It couldn’t, so she didn’t.)

As for the US, though former Secretary of State Hillary Clinton lost to Trump in 2016, she set an important precedent (and won more votes). The 2018 midterm elections brought a record number of women to the US Congress, including those four congresswomen who have been in Trump’s crosshairs. And two of the five frontrunners to take on Trump in the 2020 election are women.

None of these women needs men’s validation. But that does not mean that they would not welcome men’s support, whether political, personal, or even artistic. For example, Philipp Stölzl is staging a contemporary adaptation of Giuseppe Verdi’s Rigoletto in Austria. In his view, Rigoletto—in which a court jester attempts to end the licentious activities of his powerful employer—is the ideal opera for the #MeToo era. Perhaps that is why a woman, Australian opera director Lindy Hume, is bringing her own adaptation of Rigoletto to Seattle next month.

In today’s world, as in Rigoletto, men continue to hold disproportionate power, which they often use in ways that prevent women from gaining more. But, judging by the fast-growing number of women on the political stage—and given that they include fascists, liberals, greens, and socialists—the days of male supremacy are numbered. No wonder that we are witnessing a backlash from “alpha males” like Trump.

Nina L Khrushcheva is Professor of International Affairs at The New School. Her latest book (with Jeffrey Tayler) is “In Putin’s Footsteps: Searching for the Soul of an Empire Across Russia’s Eleven Time Zones”

Dressing in a sexually appealing way is not an invitation for sex. If a woman agrees to allow a man... Read More...