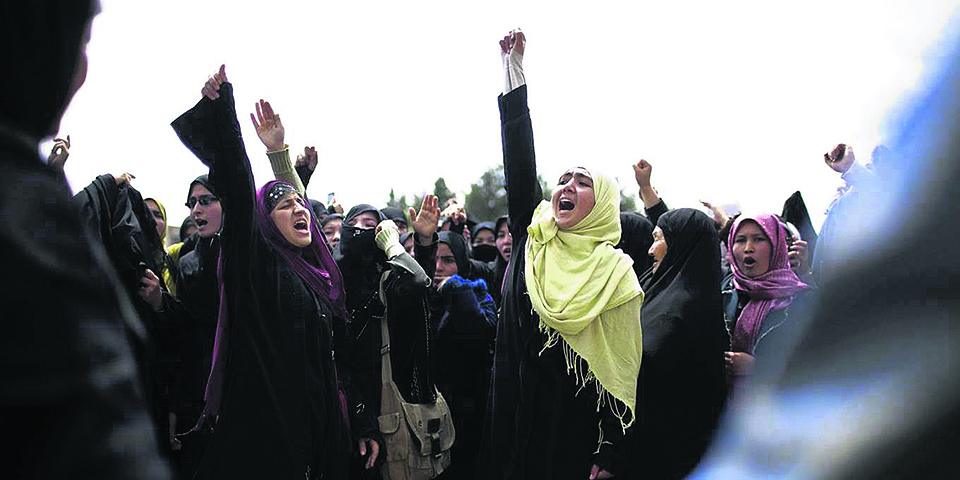 Anne-Marie Slaughter, a former director of policy planning in the US State Department (2009-2011), is President and CEO of the think tank New America, Professor Emerita of Politics and International Affairs at Princeton University, and the author of Unfinished Business: Women Men Work Family. Ashley Jackson is a Research Associate with the Overseas Development Institute
news@myrepublica.com

While Afghan women made huge strides in 2001, much more remains to be done

WASHINGTON, DC – When Zalmay Khalilzad was appointed as the US Special Representative for Afghanistan Reconciliation in September 2018, an end to America’s longest war seemed finally to be in sight. Now, following President Donald Trump’s sudden announcement in late December that the United States will withdraw 7,000 of its troops from the country, the pressure on Khalilzad to secure a deal with the Taliban by spring has increased dramatically. Many now fear that Trump wants to leave Afghanistan regardless of the consequences, least of all for the country’s women.

Afghan women’s progress is essential to that of Afghanistan as a whole. Yet women are suddenly as invisible in international press coverage as they are in much of Afghan society. Privately, many diplomats concede that women’s rights are simply not a high priority in talks with the Taliban: nice but not necessary, and, given the Taliban’s horrific treatment of women when they ruled the country in the 1990s, probably a non-starter anyway.

This line of thinking is wrong. The Taliban leadership know that they have a potentially disastrous image problem. The international community ostracized their government in the 1990s, owing in part to their treatment of women. To be accepted as a legitimate political movement and a viable partner in any future power-sharing deal, Taliban leaders believe they must demonstrate that they have changed their views.

And so they have—if ever so slightly. They now say that girls can attend school in the nearly 60 percent of the country under Taliban control, so long as gender segregation is enforced. This is a modest improvement from a generation ago, when their government prevented nearly all girls from attending school and women from working outside the home.

While Afghan women have made huge strides since the Taliban were ousted from power in 2001, their gains are at risk, and much more remains to be done. In a recent survey of 15,000 Afghans, women said their biggest problems were lack of education and illiteracy. Investing in education and income-earning opportunities for women is vital. So, too, is redoubling efforts to improve women’s access to health care.

Afghan women face a one in ten chance of dying in childbirth. The situation is so dire that Taliban commanders have been known to request the government and NGOs to deploy more midwives to areas under their control. The number of girls in school is falling, legal protection for women is being rolled back, and women in public life are increasingly subject to harassment and violence. Addressing these issues is essential not only for Afghan women, but also for their children, their families, and the country.

The best way to ensure that women’s interests are represented in the peace talks is to include women at the negotiating table, giving them an equal role in the negotiation, design, and implementation of any peace process. While most foreign-policy professionals dismiss this suggestion as superfluous, or even frivolous, including women is a matter not only of principle, but also of effectiveness. Peace processes in which women participate are on average much less likely to fail, and any agreement reached is more likely to last.

Some might argue that the Taliban would never negotiate with an Afghan woman. But they already have. A group of Afghan women, all high-profile government officials and activists, met with representatives of the Taliban in Oslo in 2015. The Taliban explicitly requested and initiated the meeting, and later said they participated specifically to address concerns about their policies.

Shukria Barakzai, the Afghan ambassador to Norway who attended the dialogue and ran an underground girls’ school under the Taliban regime, says the women had no qualms about holding the Taliban to account for their past treatment of women. “It will be unbelievable to most people how tough we were on the Taliban,” Barakzai says. “But they listened patiently and respected what we were saying, and it was clear that this was not the same Taliban we faced in the 1990s.”

Since that meeting four years ago, however, little else has been done to facilitate dialogue between Afghan women and the Taliban. Western governments may publicly emphasize the importance of women’s rights, but they have done shockingly little to back up their rhetoric. The Trump administration, in particular, will not listen to these concerns, as Trump himself evinces little concern for women’s rights in the US, let alone Afghanistan.

The international community can and must step in. Under the current NATO mission, 39 countries have troops on the ground and many others provide substantial aid to Afghanistan. Their commitment will be required to support any peace deal. They should use this leverage to ensure that women are at the negotiating table, their issues are on the agenda, and their rights are upheld in any deal.

If that proves impossible, these countries could launch and support a parallel Track II dialogue, focused exclusively on women’s rights, that could inform the broader negotiations. They should also increase aid expenditures in critical areas such as women’s health and education.

To be sure, any peace deal with the Taliban is likely to include difficult and distasteful compromises. But an agreement that lacks guarantees regarding the treatment of half the Afghan population is not worth having. And a peace that is not partly negotiated by women is much less likely to hold. Women’s rights, in Afghanistan and elsewhere, are not a foreign policy “extra.” They are essential to any serious efforts at conflict resolution.

Anne-Marie Slaughter, a former director of policy planning in the US State Department (2009-2011), is President and CEO of the think tank New America, Professor Emerita of Politics and International Affairs at Princeton University, and the author of Unfinished Business: Women Men Work Family. Ashley Jackson is a Research Associate with the Overseas Development Institute

In the aftermath of disasters, women’s specific humanitarian needs are often not adequately identified nor responded to. Women and... Read More...

Dressing in a sexually appealing way is not an invitation for sex. If a woman agrees to allow a man... Read More...

IN PICS: Flood wreaks havoc in Melamchi
7 hours ago