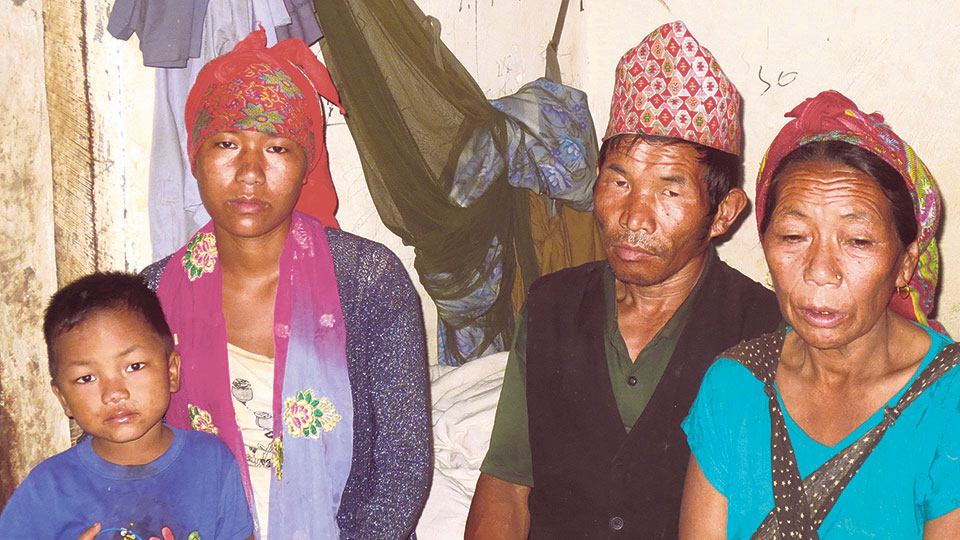 From right, Dhanapuri Rokamagar, her husband Heet, her daughter-in-law Lila, and her grandson at their home in Uwa in Thawang, Rolpa on Tuesday. Dhanapuri's all four chidlren were among those killed in Friday's deadly tipper accident in Mustang that killed a total of 20 people. Photo: Dinesh Subedi/Republica

ROLPA, July 11: Dhanapuri Rokamagar, 61, of Thabang-5 in Rolpa district silently watched the cremation of her two sons on the bank of the Lungri River. Another son and a daughter were being cremated at the same time on the bank of Rapti in Dang district. She lost all four of her children in the tipper truck accident in Mustang Friday. Altogether 20 people were killed in the accident.

Standing beside Dhanapuri was her 21-year-old daughter-in-law Lila, wailing at the loss of her husband. Both the women were inconsolable, and neighbors and others present at the funeral were at a loss for words.

Dhanapuri, her husband, daughter-in-law, grand-daughter and neighbors went to the district hospital in Rolpa to take their dead. They took the two bodies, which were already decomposing,  and performed the last rites.

On Tuesday, four of the deceased in the same accident – Rastri Roka, 23; Mahesh Roka, 19; and Shrijana Rokamagar, 20, of Thabang-5; and Sukman Roka, 28, were cremated in joint final rites on the Lungri. Earlier on Sunday, two others who died in the accident – Ram Kumar Pun and Sonti Gharti – were cremated at the same place.

Dhanapuri’s eldest son Kaman Singh Roka, 35, who died in the accident, had migrated to Kapilvastu. Also killed were her sons Rastri and Mahesh and daughter Kavita.

“I am already old and my four children have died way before their time,” said Dhanapuri. “I was not even able to see the bodies of my eldest son and daughter. My daughters-in-law and grandchildren are all I have left now.”

The family has a small piece of farmland in the village and cultivating it barely provides them enough to eat for three months of the year. With so many dead, Dhanapuri’s surviving family has no idea how they will make a living and they have no one to turn to.

Nobody has shown any concern for the family, said Dhanapuri’s husband Heet Rokamagar. “Party leaders come to us only during elections. But when we are in such difficulties, they keep a distance,” he fumed.

Rastri had spent three years in foreign employment and had returned after falling ill. He has not even managed to repay the loan taken for going abroad, informed Dhanapuri.

The local government has not taken any initiative to compensate the family. They have not even come for discussions.

“We have not held any discussions. Let’s wait and see what we can do,” said Thabang Rural Municipality Chairman Bir Bahadur Gharti. “But as of now, we haven’t done anything for them.”

However, the central government has announced aid of Rs 500,000 per family of the deceased.

Families of those killed in Upper Mustang tipper mishap to get Rs 500,000 each

KATHMANDU, July 9: The government has decided to provide Rs 500,000 in relief cash to the families of those killed in... Read More...

GAUSHALA, July 10: A youth who was injured after a tipper truck rammed his bike on Sunday night along Jaleshwor... Read More...

Woman killed after being hit by truck

RAJBIRAJ, April 22: A 25-year-old woman died after being knocked down by a truck at Kanchanrup Municipality-11 in Saptari district along... Read More...