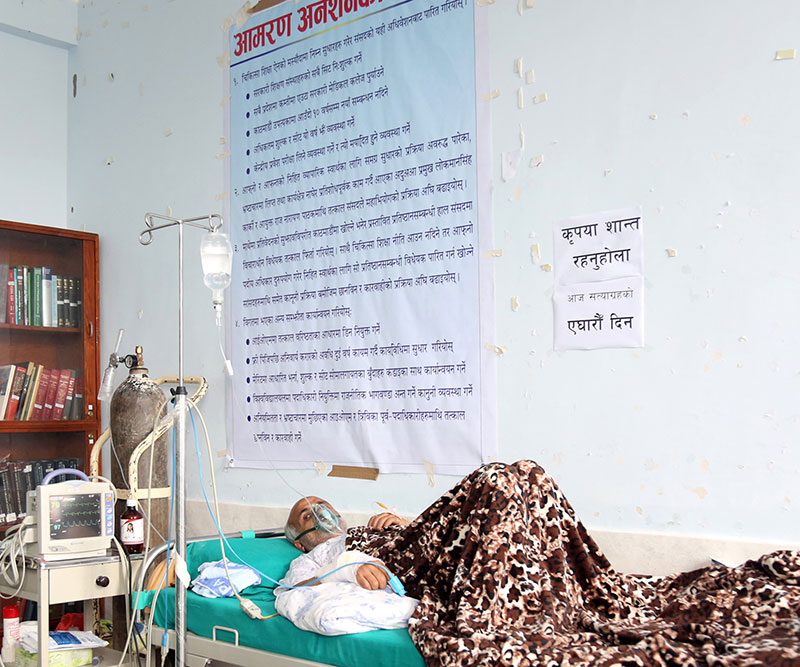 Nepal’s medical sector has been marred by malpractice, which in turn has reduced the trust of common people
Hunger strike was a weapon used by Indian freedom fighter Mahatma Gandhi as part of his philosophy of non-violence. During India’s struggle for freedom, Gandhi undertook 17 fasts—the longest one lasting for 21 days. Through this means, Gandhi shook the foundation of British Raj. The country duly became independent in 1947.

More recently, Anna Hazare, a Gandhian disciple, staged a fast-unto-death of his own in New Delhi demanding Jan Lokpal bill. Hazare’s fast sent ripples across the world. In Nepal, the hunger strike staged by Dr Govinda KC, a senior orthopedic surgeon at Tribhuwan University Teaching Hospital (TUTH), has received wide media coverage as well as public support. Thousands of people, especially youths, participated in the rally on Saturday supporting Dr KC and demanding that government address his concerns at the earliest. This is the eighth hunger strike by Dr KC.

He has been betrayed by the government of the day time and again. Unlike his past hunger strike, the current one has polarized the people due to his demand for impeachment of CIAA chief Lokman Singh Karki. So much so that he didn’t even get the support of many of his hospital colleagues. All hospital rooms were padlocked and hospital administration waited for an approval from the District Administration Office (DAO) even to form a medical team to look after Dr KC’s deteriorating health, even though his health was fast deteriorating. Some doctors who wanted to help him reportedly raised the concern that CIAA might spoil their career if they did so.

Nepal’s medical sector has been marred by ill practices, which have reduced the trust of common people. Recently the Central Bureau of Investigation (CIB) arrested 36 doctors possessing forged academic certificates. But this is only the tip of the iceberg.

Anyone can become a doctor in Nepal if they are willing to pay huge donation fees to medical colleges. Investigation has found that many colleges have been taking donations to admit foreign students without taking qualifying exams. Nepali students are also admitted as Indian students to avoid entrance exams.

The government has fixed MBBS fee ceiling at Rs 3.5 million but medical colleges are charging much more from students. Students, especially medical students, should be admitted based on academic excellence rather the amount of donation they can put together. But the network of medical mafias and corrupt government officials have not let this happen.

A number of medical colleges without adequate infrastructure were granted affiliation based on false reports of the Nepal Medical Council (NMC).

Colleges are found to have bribed NMC officials as well.

Medical colleges hire faculties from India on temporary basis, whom Dr KC calls ghost faculties because they are never to be found in colleges during NMC inspections. Nonetheless, these understaffed and ill-equipped colleges are proliferating, producing under-qualified doctors, who are sure to endanger many lives when they don white coats.

Another problem is high density of medical colleges in Katmandu Valley. At least one medical college should be established in each and every federal province, according to government policy. But the majority of medical colleges are still being built inside the valley. This has forced poor people to come all the way from the far far-flung villages to Kathmandu, even for basic treatment.

The Commission for Investigation of Abuse of Authority has acted more as a hindrance than a facilitator in cleaning up the mess in medical sector.

This is why Dr KC is demanding the impeachment of Lokman Singh Karki.

According to media reports, Kathmandu University was preparing for a routine entrance exam for its post-graduate medical program when CIAA officials and police stormed university premises and conducted the entrance examination on its own. CIAA has no business conducting such exams.

Dr KC has revealed that CIAA had written to Tribhuwan University asking it to provide affiliation to medical colleges run by various party cadres. If so, CIAA’s activism is dubious and unwarranted.

Jyoti Baniya, the leader of consumer group who once served as a NMC member, has also revealed that NMC took instructions from CIAA Secretariat while increasing the number of seats in KIST Medical College that is based in Gwarko, Lalitpur. It turns out that the owner of KIST, Balman Singh Karki, is the brother of CIAA chief.  When Baniya raised this question, CIAA filed a corruption charge against him. An investigation committee set up by Ministry of Health has confirmed high-handedness of CIAA in allocating seats in medical colleges.

The CIAA has tried to defame Dr KC by calling him a lunatic. As a matter of fact, Dr KC is a noble soul who is fighting for vital reforms in health sector. People should stand by him at this moment to make his mission for reform a resounding success.

On 12th day of fast, Dr KC said to be critical

KATHMANDU, August 4: On the 12th day of his latest fast-unto-death, the condition of Dr Govinda KC, professor and senior... Read More...

Upper Tamakoshi Project likely to be delayed
10 minutes ago