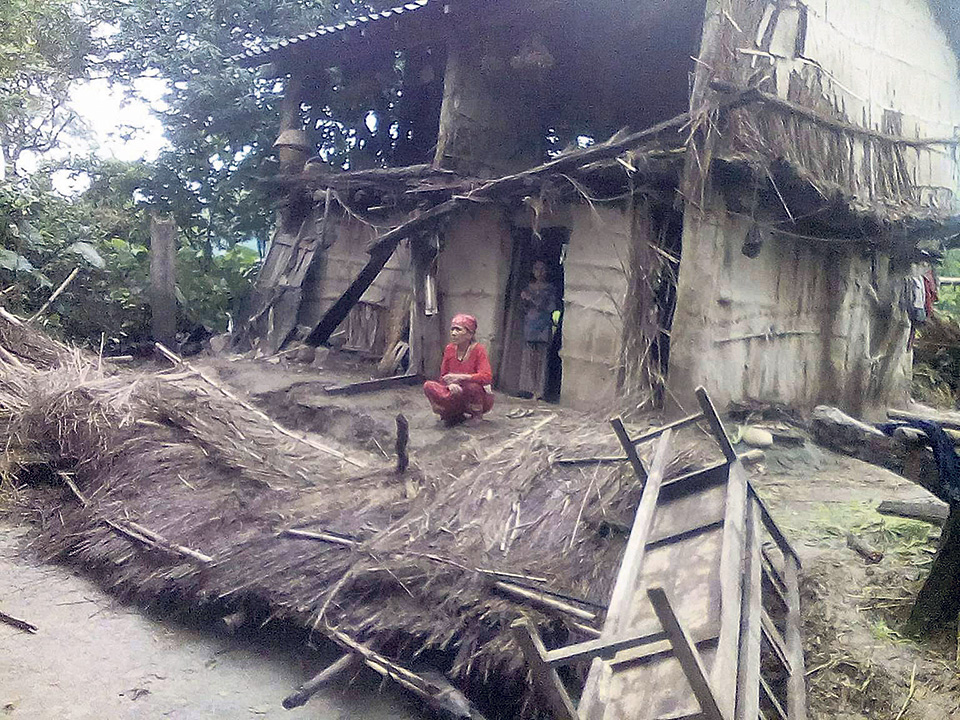 BARDIYA, August 26: As many as 36 people have been killed while many have been victimized by the rampaging attack of elephants in Bardiya in the last 17 years. However, many victim families lament that the government has neither provided them with compensation nor has it taken any remarkable efforts to reduce the tusker menace.

Thirty-two-year-old Bimala Pariyar of Geruwa Rural Municipality, Hattikhalla was crushed to death by an elephant on December 10, 2017. She was attacked by the elephant when she was heading toward her tailoring shop early in the morning. After the death of the breadwinner, her two little children are living a miserable life.

Similarly, in the second week of last September, two persons lost their life in separate elephant attacks. While returning from school, 15-year-old Yuvraj Tharu of Suryapata VDC was attacked by a tusker. On the same day, Purai Tharu,72, of the same village was also killed while he was looking after his crops. Both of them died on the spot.

Haste Kami of Manikapur, who was attacked by an elephant on July 8, 2003, is living a crippled life since the incident.  He had borrowed some loan for his treatment but has not yet been able to pay back the debt.

Gopal Thapa of the same village cannot hide his emotions when recalls the fateful day twelve years ago when his wife Parbati was crushed to death by an elephant.

There are many people like him who are forced to live their lives in the absence of their loved ones. In the last one month, houses of more than 20 victims have been smashed by elephants.

Ramesh Thapa, chief conservation officer of Bardiya National Park (BNP), says elephants are as sensitive as humans. “They won't attack anyone unless they are chased,” he said. According to him, too much of sound and disturbance instigate elephants for the rampage.

As per the details provided by BNP, 36 people have been killed by elephants in the last 17 years. Last year, six people living in the buffer zone lost their lives while other six were disabled in the attack. Moreover, 500 houses, 60 bigha of arable land and stored food of more than 250 people were damaged by elephants. Those who were killed and have lost their property due to elephants before 2011 are yet to receive compensation and relief.
As informed by Chief Conservation Officer Thapa, a team of Nepal Army and officials of BNP have been deployed to control elephant menace. He further informed that within a few months, the team will be evaluating the total loss and then will provide relief to the victims. With the coordination of Geruwa Rural Municipality, electric fencing will be set up in Patabhar, Gola, Manau and Pashupatinagar with the objective of mitigating the risk of elephant attacks.

Terror of elephant has threatened the security of the entire south western region of the country. Some people fear to go to bed as they are afraid that they might not wake up in the same way the next morning. They even fear to go to markets. But still wonder how long will they have to live like this.

The government has time and again announced relief for those attacked by wild animals but still the victims say they are deprived of the relief.

BANKE, Aug 4: Protection and conservation of wildlife continues to become a challenge in Banke national park with the East-West highway... Read More...

CHITWAN, Jan 26: Chitwan National Park (CNP) is home to thousands of wild animals and birds. Since they roam beyond the... Read More...

BHADRAPUR, Aug 23: A herd of wild tuskers strayed into a forest office compound in Bhadrapur Municipality – 2 on... Read More...