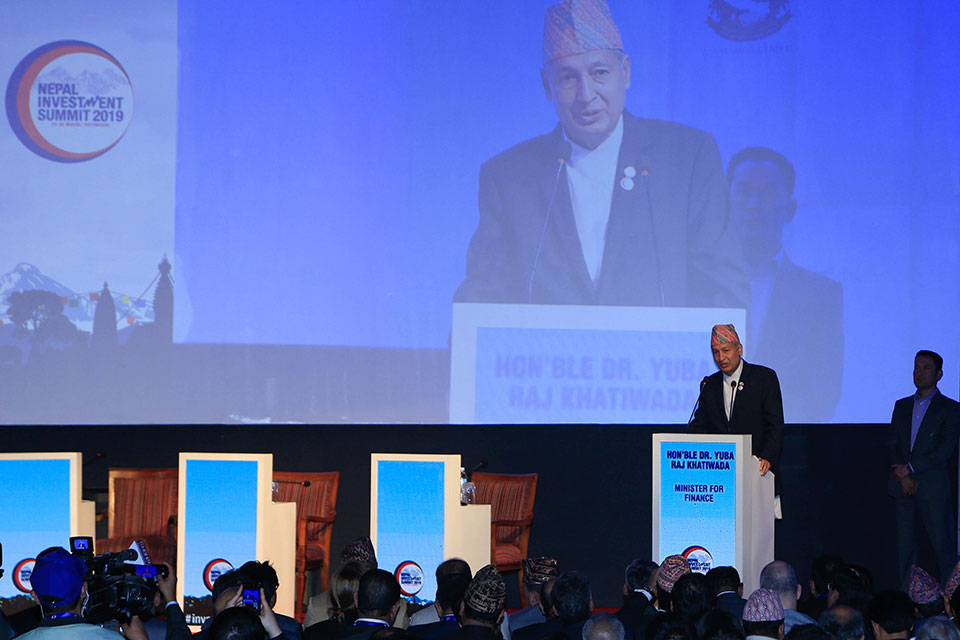 Nepal Investment Summit 2019 asked for US $ 31 billion to establish a monopoly State. Only persons missing from the summit were people of Nepal

Nepal Investment Summit 2019, held in Kathmandu on 29-30 March, was so well attended that the Minister of Industry, Commerce and Supplies couldn’t even find a vacant seat in the opening session of the conference.

The summit featured 77 projects with total investment requirements of $31 billion. It drew a thousand participants. The Prime Minister, key cabinet members and secretaries of all relevant ministries were there. At least a dozen countries sent high ranking representatives. The venue was teeming with media.

Experts, investors, development partners financial institutions, opinion makers—everyone, almost everyone, it seemed—was there. The only persons missing from the Nepal Investment Summit 2019 were the people of Nepal.

By the time the summit ended, agreements had been signed for investments in 15 different projects. Many of them were projects being developed by the private sector. Despite the presence of the private sector, the dark cloud of the growing monopoly of the State failed to receive any mention.

As much as it showcased Nepal as an investment destination, the summit equally showcased an increasingly dominant State determined to establish an absolute monopoly. The summit was as much an exhibition about who was in favor and who was not, as it was about showcasing public-private partnerships.

Monopoly of state
To understand Nepal’s growing State monopoly, rewind to a few days before the summit.

On March 21, Prime Minister K P Sharma Oli applied for and purchased 10,000 shares in the Trishuli III B hydropower project. It was a symbolic application that was intended to launch the Government’s scheme, “Nepal’s Water, People’s Investment: Every Nepali’s Share on Electricity.”

Launched in February this year, the scheme aims to build under Government ownership 16 hydro plants totaling 3,479 MW. To finance these plants, the Government wants to raise approximately Rs 102 billion ($1 billion) from the public by selling shares of a holding company that will develop, install and own those plants.

The public will own up to 49 percent of the shares. State owned entities, including public institutional funds, such as the Employees Provident Fund, and Nepal’s armed forces (police, army and armed police) will hold the rest.

With this symbolic share purchase, it was clear that Nepal’s long political revolution that had promised to empower its people had reached an inflection point—a somewhat tragic inflection point.

The scheme is as ambitious as it is troubling.

The mechanics governing the fund offers little independent governance, oversight or safeguards. For instance, if the investments raised cannot be utilized for the plants, it could be reallocated at the discretion of the State. Specific rules of the Securities Board of Nepal, which regulates the market for shares, were specifically changed to meet the needs of this scheme.

But even beyond the details of the mechanics, the fundamental principle of the scheme is deeply disturbing.

The State has the absolute right, if it so chooses, to build hydro power plants (or anything else for the matter). That authority of the State is not in dispute. The question is, should it? It should not.

First, the State’s involvement in large-scale construction and ownership of hydro power plants, or other infrastructure projects, will merely magnify and extend political interference in the sector.

Already, the biggest problem in the sector is political interference. This is what sustains corruption, rent seeking behavior and poor policy implementation in the first place. Getting the State now to take the lead in raising investments, building, owning and operating those plants is like providing a never-ending license for political interference.

Second, it is possible for State-owned enterprises, such as the one proposed for the recent hydro scheme to be run professionally. Many state-owned enterprises around the world, though initially seeded by public finance, have gone to operate professionally, profitably and with a great sense of social purpose. But for that, you need a political machinery that is willing to divest itself from the operations of that enterprise.

There is no State-owned enterprise, or for that matter any independent entity, in Nepal that runs free of political interference today. Nepal’s current political environment, no matter which party comes to power, will simply not allow this to happen.

Third, the scheme changes the narrative sharply on hydro. Ask yourself, why should I, a Nepali citizen, buy shares in hydro plants under the scheme? For the simple reason that it will be a profitable investment?

This subtle assumption about the profitability of hydro plants is the foundation around which the monopoly of the State is being built. The scheme first magnifies the idea that investments in hydro plants are profitable and then goes on to fuel a populist sentiment that people, rather than the organized private sector, should be the beneficiary of those profits.

Whether the scheme will lead to 3,500 MW of hydro power plants or not is unclear. But whatever the outcome, one thing is clear—you must be a fool to still believe there are investment opportunities for the private sector in hydro sector.

The monopoly of the State has crowded everyone else out.

Only game in town
Whether or not the State successfully builds 3,500 MW under the scheme is a bit irrelevant. In the process, it has created a large institution with significant resources, tremendous power and entirely outside of legislative authority and oversight.

As far as the hydro sector goes—and it is the same story in other sectors—the State is now the only game in town. This growing monopoly of the State brings with it immense risks.

First, it raises the stakes for political power and makes it an all or nothing contest. The only way to prosper, perhaps even just survive, is to control the machinery of the State or have strong access to political power.

That pretty much ends our hopes of ending corruption and empowering people, which may be what we may have intended to do by adopting a democracy.

Second, as the stakes for political power become higher, we march steadily toward an era of uncertainty, violence and conflict. There is a reason that our infrastructure is weak, our hydro plants inadequate to meet our electricity demand. It is simply because the State is incapable of developing these on its own.

With no change in approach; with no meaningful effort to depoliticize the sector or to safeguard against corruption, the State has now reasserted its control over the initiative by crowding out others who may have wished to lead.

But as the State’s fails (or struggles) to deliver on its commitments, the resulting failed aspirations, unmet expectations and corruption will make for a combustible combustion in the same way that fuelled the Maoist insurgency two decades ago.

The State’s ambitious, “Nepal’s Water, People’s Investment” scheme of 3,500 MW hydro power plants fits a pattern of Government initiative that is undermining other institutions, crowding out other stakeholders and rapidly building a monopoly of the State.

Whose investment summit was it really?