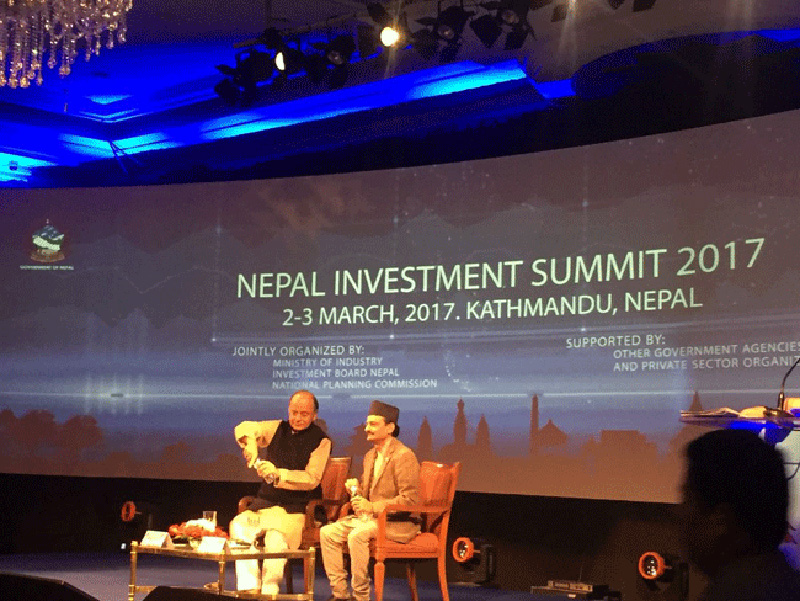 Coming up with $24 billion over the next ten years is going to be a Himalayan challenge for Nepal
Minister for Energy, Janardan Sharma, said last month that the government aims to generate 17,000 MW of power within the next seven years. He said out of that 8,000 MW would be generated by the projects under government supervision and the rest by the private sector.

This ambitious announcement surpasses the government’s own commitment, expressed during the Nepal Power Summit 2016, when the Government of Nepal (GoN) set a target of 10,000 MW in 10 years. This means that the country will need an investment of approximately US $24 billion during this period.

According to the Nepal Banking Association, the amount available (for investment in hydropower sector) over the next 10 years in the Nepali banking sector is around $2 billion only. A handbook entitled “Opportunities for UK businesses in Nepal’s hydropower sector,” published by the British Embassy in Kathmandu, estimates that Development Finance Institutions may be able to allocate $2 billion, most of it coming from the International Finance Corporation (IFC)—a member of the World Bank group. Assuming domestic equity of approximately $3 billion, this leaves an additional Foreign Direct Investment financing requirement of $17 billion.

During the Nepal Investment Summit in March this year, foreign investors made a pledge of over $13 billion in different sectors including hydropower. While China came at the top by pledging $8.2 billion, power-hungry Bangladesh stood second with its pledge of $2.4 billion. Investors from Japan and the United Kingdom pledged over $1 billion each. Meanwhile, investors from the southern neighbor, India, committed $317 million.

It’s not clear how much of that pledge will actually materialize, given the fragile political situation in the country, but coming up with $24 billion over the next ten years is going to be a Himalayan challenge for Nepali officials, to say the least.

Over the past one decade, the installed capacity in Nepal has increased by around 50 MW per year; last year, it increased by 150 MW. Thus an increment of 1,000 MW per year looks highly ambitious, if not impossible. A World Bank report suggests that 10,000 MW is possible but that it would take 15-20 years.

On March 22, 2017, the Lord Mayor of London, Andrew Parmley, hosted at his office a meeting of British investors, businessmen, leaders of the Non-Resident Nepali community and Nepali officials.

Addressing the meeting, Industry Minister Nabindra Raj Joshi said the GON will go the extra mile to facilitate foreign capital and technology in different sectors including hydropower. He said the government was looking to enter into Double Taxation Avoidance Agreement with the UK, among others, and promised every possible help to British investors.

A study conducted by the Dolma Development Fund with support from British Aid Agency, DFID, in 2014 concluded that hydropower is the most attractive sector for investors in Nepal, and that there is great potential to grow in the renewable energy space. The study identified increasing domestic demand fuelled by rising income levels, industrial growth and government focus on energy sector as key growth drivers for grid power in Nepal. The study, however, warned that there are some infrastructural and regulatory challenges that the government needs to resolve in near future.

For British investors, Nepal offers an attractive investment destination. According to the British Embassy handbook, the approximate value of the hydro market in Nepal is in the region of $20.33 billion. Using the more realistic scenario of 8,700 MW in 15 years and assuming a 10 percent market share, British companies could aim for annual turnover of $13-$106 million, according to the handbook.

And, recent experience of Indian Masala bond could be interesting for prospective investors. In March this year, the Housing Development Finance Corp (HDFC), one of India’s leading banking and financial services companies, floated what is being called Masala bond at the London Stock Exchange (LSE). The HDFC was able to raise INR 33 billion (approx. $504 million) by floating the 37-month dated Rupee-denominated bond with an annual yield of 7.35 percent. Both Asian and European investors expressed their interest in the bond and it was more than two times oversubscribed.

Tim Gocher, founder of Dolma Impact Fund—the first international private equity fund dedicated to Nepal—believes that British and Nepali investors, backed by both the governments, can float similar bonds at the LSE to raise capital to invest in Nepal’s hydropower sector.

But the risk of attracting such money from international market is that you will have to start paying interest from Day One. If you can’t complete the project on time and can’t negotiate a favorable rate with the Nepal Electricity Authority (NEA)—the monopoly buyer—return on investment would be uncertain. While you will need transmission lines to be ready to evacuate power from the completed projects, you will also need a neighboring market to sell the power after Nepal’s domestic electricity demand is met.

In October 2014, the governments of Nepal and India concluded a Power Trade Agreement (PTA) to enable cooperation on a number of power sector activities including transmission interconnections, grid connectivity, power exchange and trading. The PTA gives Nepal access to the Indian power market, though it is not clear if India would be happy to buy power generated by companies other than those involving its own investors.

Writing in The Hindu recently, former member of the Planning Commission of India Kirit Parikh observed that building hydropower projects and transmission infrastructure is highly investment-intensive. “Without a stable, long-term conducive policy and an institutional environment in place, which ensures payment security, it is unlikely that investors will put their money in this risky business.”