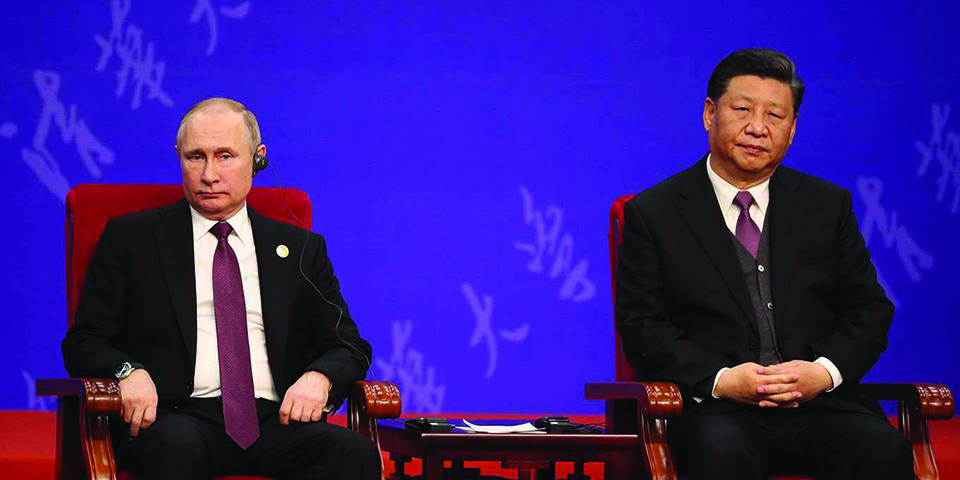 As with Putin, overreach seems to be Xi’s default position nowadays, judging by his handling of the trade war and aggressive behavior toward China’s neighbors

MOSCOW – Ongoing street protests in Hong Kong and Moscow have no doubt spooked the authoritarian duo of Chinese President Xi Jinping and Russian President Vladimir Putin. The Moscow protests, the largest in many years, must be keeping Putin up at night, or they wouldn’t be dispersed with such unabated brutality. Yet rather than hold a dialogue with the people, Putin has been demonstrating that he is in control, even preening for photos in a tight leather outfit with his favorite motorcycle gang.

Nonetheless, the demonstrations have become a poignant sign of Putin’s declining popularity, including among Russian elites, whose views matter in ways that other forms of public opinion do not. For two decades, the Russian elite’s rival factions have generally seen Putin as the ultimate guarantor of their interests—particularly their financial interests. But as Russia’s economy has sunk into sanctions-induced stagnation, Putin’s leadership has started to look like more of a roadblock than a guardrail. Fewer and fewer Russians still accept that “Putin is Russia and Russia is Putin,” a mantra that one heard regularly just five years ago, following the Kremlin’s annexation of Crimea.

Moreover, Putin’s hope that US President Donald Trump would improve relations with Russia has begun to look short-sighted, if not downright delusional. Although Trump has weakened American institutions and undermined Western alliances, which has played into Putin’s hands, the White House has also rendered US foreign policy utterly unpredictable. Worse, the Trump administration is now systematically unwinding the arms-control accords that long brought some degree of certainty to nuclear affairs.

Russian elites know that their country is as ill-prepared to win a nuclear-arms race with the United States now as the Soviet Union was in previous decades. The recent explosion of a nuclear-missile engine at a test site on Russia’s northern Arctic coast is a grim reminder of a deep-seated incompetence. And unlike Putin, Russian elites are deeply worried that alienating the US will make Russia a de facto vassal state vis-à-vis China.

The protests in Hong Kong, which show no sign of abating, are likewise the product of authoritarian overreach. They began with a proposed law that would allow Hong Kong citizens and residents to be extradited to the Chinese mainland. Given how clumsily the legislation was presented by Hong Kong’s Beijing-backed leader, Carrie Lam, it is possible that the Chinese leadership was only dimly aware of it and its potential political impact. Nonetheless, the Chinese government’s response to the protests has been increasingly self-defeating.

For starters, the People’s Liberation Army has been openly threatening to intervene to shut down the protests against Lam’s government. And in cases where pro-government “triad” thugs, most likely based on the mainland, have shown up to assail protesters, the police have been conveniently absent. As everyone in Hong Kong knows, these extrajudicial beatings had to have been sanctioned by Xi’s government.

More ominously, Xi may have already decided that the time for “one country, two systems” has passed. China, he might argue, can no longer tolerate a functioning quasi-democracy within its territory, despite the agreement it accepted as a condition of Hong Kong’s return to Chinese sovereignty in 1997. Concerned about Taiwan and its political drift ever further from the mainland, Xi may be thinking that a harsh Hong Kong policy will scare the Taiwanese into line. If so, he has forgotten that bullying Taiwan has only ever yielded the opposite of what China intended.

Then again, Xi may be contemplating something even worse. If he has concluded that Trump’s “America First” administration would do nothing to protect Taiwan, he could be considering a lightning military strike on the island to bring it back under the mainland’s control. But this, too, would be a mistake. Given the broader context of Sino-American relations, even the Trump administration would likely respond to Chinese military adventurism in Taiwan. Besides, the US need not engage in an open military confrontation with China to make aggression toward Taiwan more trouble than it is worth. The US Navy still has the capacity to cut off the sea lanes supplying energy and minerals to China, regardless of whether it is actively engaged in the South China Sea.

As with Putin, overreach seems to be Xi’s default position nowadays, judging by his handling of the trade war and aggressive behavior toward China’s neighbors. In fact, Xi’s muscle-flexing has been so heedless that China now finds itself increasingly isolated diplomatically. Almost all the world’s leading military and economic powers—the European Union, India, Japan, Brazil—maintained pragmatic relations with Xi’s predecessors. But they have since grown increasingly wary of China, with some even moving closer to the US (in the age of Trump, no less).

As in Russia’s case, China’s elite will no doubt have noticed that Xi is turning the country into an international pariah. The outside world may assume that China’s senior leadership is as subservient to Xi as the Kremlin is to Putin. But that is also what many thought about the Soviet politburo and Nikita Khrushchev back in 1964. Khrushchev was ousted before the end of the year.

There is an old joke in which the long-serving Soviet foreign minister, Andrei Gromyko, quips, “We had to remove Khrushchev. He was so reckless a gambler, we would be lucky to hang on to Moscow if he continued.” Khrushchev was indeed impulsive when he precipitated the Cuban Missile Crisis. But he was motivated by a desire to maintain military parity with the US. He did not share the Stalinesque delusions of grandeur that seem to be driving Putin and Xi to wager their own countries’ futures.

Today, no one should assume that either leader will be spared Khrushchev’s fate, or even Stalin’s grim death, which was long rumored to have been perpetrated by his own entourage, whose members had tired of his despotic overreach.

Nina L. Khrushcheva is Professor of International Affairs at The New School. Her latest book (with Jeffrey Tayler) is “In Putin’s Footsteps: Searching for the Soul of an Empire Across Russia’s Eleven Time Zones”