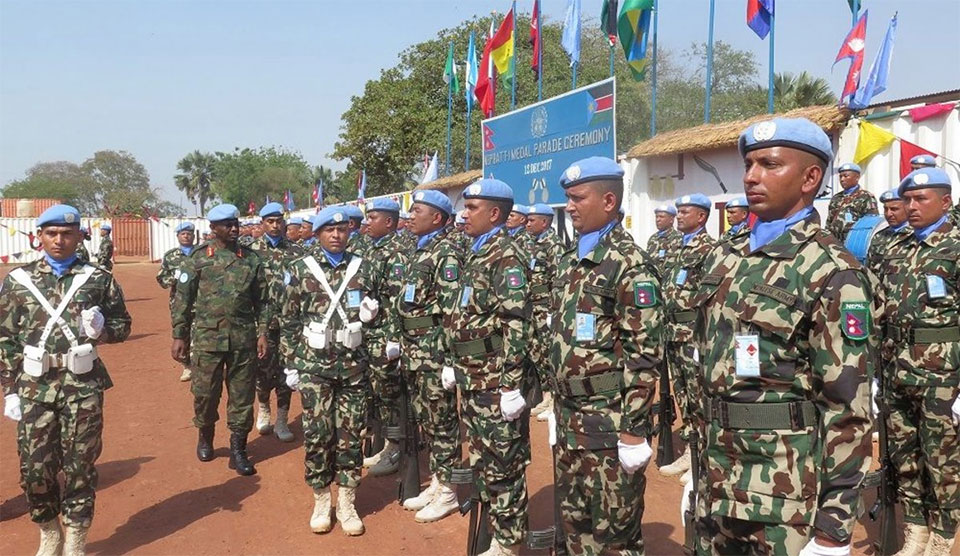 Participation in peacekeeping operations has not only been a modest way of Nepal to contribute to global peace, but also a means to bring home significant amount of foreign currency to help keep the country's economy afloat.

KATHMANDU, April 11: The inflow of remittance has begun to witness a sharp plunge. The tourism industry faces the biggest catastrophe in Nepal's recent history. And there is only a slim chance for the country's exports to grow any further.

Amid these gloomy developments resulting from the COVID-19 pandemic has come yet another bad news that is likely to further dry up the country's source of foreign currency earning: the United Nations faces a perilous financial situation and has only enough cash to fund peacekeeping operations barely for the next two months.

Addressing the UN Security Council meeting on COVID-19 Pandemic in New York on Thursday, UN Secretary General Antonio Guterres said that the UN was finding it difficult to continue its activities including peacekeeping operations as all major donor countries are embroiled themselves in serious financial crises and no sign of new funding coming.

“The financial situation of the United Nations remains perilous, and we have only enough cash to fund peacekeeping operations through the end of June and limited capacity to pay troop- and police-contributing countries,” said Secretary General Guterres during the meeting.

The United States has been the single largest donor country to the UN so far. But as the US itself grapples with a serious financial problem as a result of the COVID-19 pandemic and other major source countries also reeling under similar situations, there are fears that the funding sources of the UN would shrink down significantly in the days ahead.

Participation in peacekeeping operations has not only been a modest way of Nepal to contribute to global peace, but also a means to bring home significant amount of foreign currency to help keep the country's economy afloat. Although there is no exact statistics on the foreign currency that Nepal brings home through its participation in these operations, it is estimated that Nepal stands to lose several billion rupees in cash a year should these peacekeeping operations be halted due to financial constraints.

Apprehensions are also being raised from various quarters if the UN could survive this COVID-19 pandemic as the US has been trying to take every opportunity to use it as a tool to embarrass China, while Beijing attempts to thwart any such move of the US in the UN Security Council. Most recently, US President Donald Trump attacked the World Health Organization (WHO) for being too "China-centric" in its tackling of this pandemic and even threatened withdraw funding to the UN agency.

Nepal is the fourth largest Troops and Police Contributing Country (TPCC) since January 1, 2020 with an increased participation of Nepali peacekeepers in various 12 UN peacekeeping missions around the world. Altogether 5,658 security personnel including contingents, military observers and staff officers from Nepal are currently serving in the UN peacekeeping missions.

Amid the growing financial crunch this global organization faces, Secretary General Guterres said that he had notified all troop- and police-contributing countries that rotations, repatriations and new deployments of military and police personnel would be suspended until the end of June, with limited exceptions in extenuating circumstances. With the worsening financial health of the United Nations, there are doubts if all peacekeeping missions would continue their operations in the near future.

KATHMANDU, March 31: The government has barred import of luxury vehicles and a number of expensive edibles to avoid possible... Read More...

KATHMANDU, Sept 8: The Nepal Tourism Board (NTB) has formed a ‘Tourism Revival Taskforce’ to revitalize the tourism industry that... Read More...

KATHMANDU, April 30 : The United Nations has urged governments around the world to dramatically overhaul policies and invest in public... Read More...