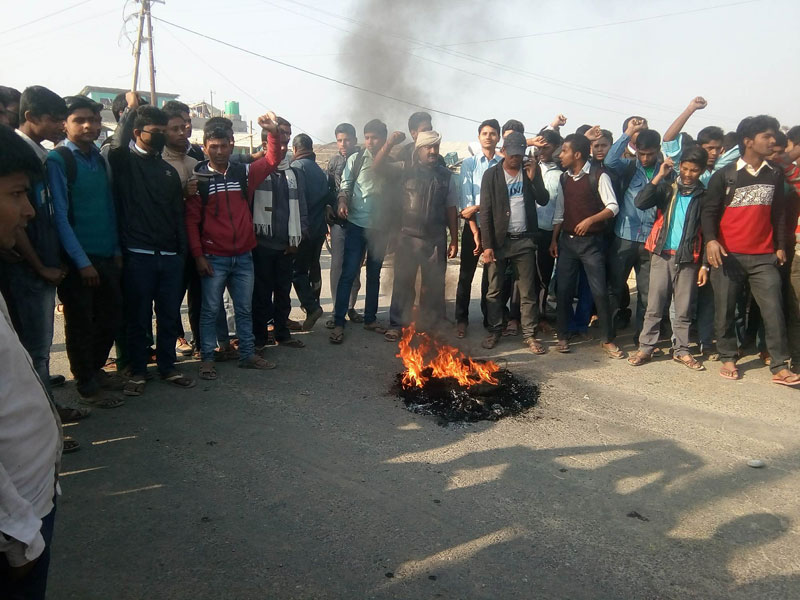 The UDMF cadres in Rautahat. Photo by Madan Thakur

RAJBIRAJ/RAUTAHAT, March 7: Cadres of Madhesh-based parties have started demonstration from early morning on Tuesday in all the Madhesh districts as the United Democratic Madhesi Front (UDMF) has called for general strike in the region on Tuesday and Wednesday.

The UDMF has appealed its cadres to protest against the brutality of the security forces during the mass meeting of CPN-UML, as a part of Mechi-Mahakali Campaign, in Maleth of Saptari. Three people died and 14 others sustained injuries as the police opened the fire to take control over the situation..

In Saptari, the local leaders of the UDMF are sitting on a meeting to decide further protest programs and for making arrangements for the treatment of the injured.

All the markets in Saptari are closed down and there is no vehicular movement in the district.

In Rautahat, the UDMF cadres are demonstrating in Gaur, Sakhuwa, Jaynagar and Garuda. They have asked all the schools and shops in the area to shut down and there is also no vehicular movement.

Debris clearance on Narayangadh-Muglin stretch from early this morning

RATNANAGAR (CHITWAN), July 13: The task of removing debris of landslide that occurred at Charkilo of Kalikhola along the Narayangadh-Muglin... Read More...

RAJBIRAJ, March 8: On account of Saptari incident that left three killed in police firing on Monday, cadres of the... Read More...

One killed, seven injured in car accident in Biratnagar
13 minutes ago

Spanish Speaker on a visit to Nepal
20 minutes ago