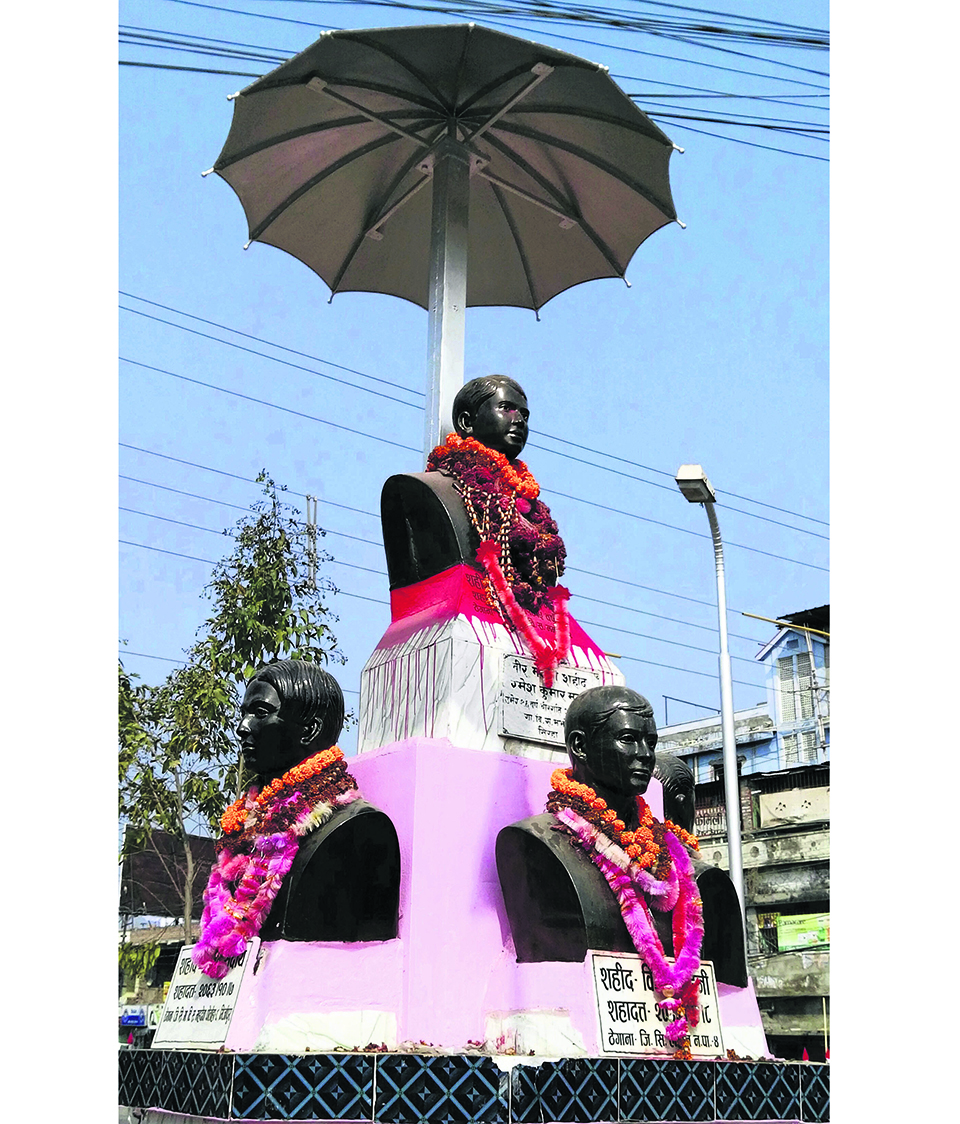 Decades had happened in the first few weeks of 2007, it will most definitely happen again. History doesn’t repeat itself only as tragedy and farce, sometimes it does push the society forward

When a ragtag band of Madhesis assembled at the Maitighar Mandala in the winter of 2007, few onlookers present at the site could guess that the freak rockfall of an unorganized protest will turn into an avalanche of political uprisings within a week. The heavy security bandobast seemed somewhat ominous, but the police force in Nepal isn’t too well known for its discreetness.

Overstaffed and underworked, security forces in Nepal deploy an entire battalion where the presence of a few law enforcement personnel will do. It could be seen the other day in Kirtipur where a posse of gun-toting policemen in battle fatigues was posted to protect a rock that has traditionally been used by the residents of Kirtipur to express their impotent rage at the vengeful victor of Gorkha.

In early-January, 2007, Sadbhavana Party—the main political force of Tarai-Madhes at that time—was a signatory of the Interim Constitution along with other six parliamentary parties and the freshly mainstreamed former Maoists. They were unlikely to oppose the statute that they themselves had adopted. Then as now, the Madheshi politicos of Nepali Congress and the UML lacked the political spine to go against their organizational masters. With a few notable exceptions, the assembly at Nepal Mandal was political but not that of any political party.

It was a cold day, so protestors were dressed appropriately for the weather including the Dhaka Topi that adds color to the drab winter-wear in Kathmandu. Dress is hardly a trustworthy indicator of class, but it was clear from conversations at the venue of protest that most demonstrators came from a background that could be called the neo-intelligentsia of the aspiring bourgeoisie.

Somewhat like Gramsci’s intellectuals of the dominant class such as business executives, bankers, bureaucrats, managers, teachers, engineers, doctors and lawyers that serve the regime in the name of professional proficiency and political neutrality, the neo-intelligentsia of the externalized groups takes pride in its competence and boasts of being ‘non-partisan’ without realizing that the term actually means being an unashamed conformist and the loyal servant of the existing order.

In some ways, the status quo proclivities of the neo-intelligentsia at the Mandala were understandable. Apart from everything else, what really differentiate the neo-intelligentsia from its more traditional brethren—patriarchy being another defining feature of embourgeoisement—is the complete absence of an ideology.

The neo-intelligentsia in emergent polities genuinely believes that its achievements are fruits of hard work and superior intelligence. Consequently, it dislikes the proletariat and holds the weak in utter contempt. It prefers to fashion itself after ‘the nationalist bourgeoisie’ and apes their dress, address, lifestyle, language and religious practices to pass as a member of the dominant community.

The ruse, however, seldom works. Former President Rambaran Yadav is still trying to be a passable carbon copy of a proper nationalist as he carries the weight of ever-present Dhaka Topi on his head with a heavy heart. Despite being chided repeatedly since 2015 by the likes of the-then dotard of Baluwatar Sushil Koirala, the one-time Maoist chaperon Krishna Prasad Sitaula and unabashedly oligarchic ethno-nationalist Khadga Prasad Sharma Oli, there is little that the former First Citizen can do to take pride in his Madhesi identity.

The moment a neo-intelligentsia is perceived as a challenge to the hegemony of the dominant community, the process of ‘othering’— attempting to establish a person as unacceptable through belittling, stigmatization, negative labeling and stereotyping—begins. It hurts being disowned, but the neo-intelligentsia lacks the courage to adopt an ideology—any ideology—for its emancipation. Lacking conviction, the group is an easy prey for political manipulations. The PEON adroitly managed the bruised ego of the Madhesi neo-intelligentsia to contain Maoists and clip the wings of inclusive politics.

There was hardly anything new in the claims of the First Madhes Uprising. Population-based constituency has a history dating back to the ‘one person, one vote’ and ‘no taxation without representation’ declarations of democracy in the nineteenth century. The Madhes as a distinct nation within the political boundary of Nepal has remained the enduring theme of politics in Tarai-Madhes since at least the time of Chandra Shamsher when Mauni Baba of Janakpur had made that assertion in the court of the Rana Prime Minister for the first time. Vedanand Jha in the 1950s, Raghunath Thakur in the 1960s, Laxmi Narayan Jha through the 1970s till he was forcibly disappeared in mid-1980s, and Gajendra Narayan Singh in the 1980s through 1990s merely kept pursuing the same path of dignity politics without much success.

If anything, Upendra Yadav, the politico who rode the wave of the First Madhes Uprising, had made a career out of opposing all claims of Madhesi nationalism. Somewhat like CK Raut of 1990s, UpYa had been schooled in the Marxist-Leninist and Mahendrist School of Ethno-nationalism in the 1980s and had served Maoists well in the Madhes till the late-1990s. He realized just in time that there was little place for his ambitions in the Bahunistic ethno-nationalism of leftwing parties.

It’s too early to evaluate the reason that made UpYa more successful than his more illustrious predecessors in Madhesi politics, but the there is little doubt that strident anti-Maoism of Madhesi Janadhikar Forum did play a major role in his dramatic rise. His genius lay in recognizing that not just the PEON, but even the Indian handlers of the Maoists were alarmed by the sudden bonhomie between Girija Prasad Koirala and Pushpa Kamal Dahal.

A broad negative coalition of diverse anti-Maoist forces emerged in the wake of the First Madhes Uprising. Among domestic forces, the Hindutva element was the first to appropriate Madhesi politics. Long harassed by the Maoists, Marwari businesses rallied around UpYa. Every element of the PEON encouraged Madhesi activists to insist upon ‘One Madhes, One Province’ demand, which had the dual purpose of delegitimizing federalism and driving the wedge of distrust between Janajatis and Madhesis deeper.

UpYa established his ruthless credentials after the Gaur Massacre in March 2007 when several Maoists were beaten to death in broad daylight. A violent eruption on such a massive scale was impossible without complicity, even if not direct participation, of law enforcement agencies in a sensitive border town. Fighting for survival, Chairman Dahal meekly accepted the inevitable and agreed to withdraw from Madhes in a phased manner. Once his utility as a trouble-maker was over, UpYa was rebranded as a ‘nationalist politician’.

The Second Madhes Uprising began in the spring of 2008 with much milder set of political claims. It led to the Constituent Assembly elections, declaration of the republic and the slow but sure slide into regressive politics of what came to be recognized as Khas-Arya ethno-nationalism of the urban White Shirts.

By the PEON Restoration of 2013 through ‘Judicial Coup’ and the formation of extra-constitutional government, Madhes Uprisings had lost direction. The neo-intelligentsia was happy with the very small slice of a big cake in the name of reservation in the civil services. By exposing his casteist colors, reportedly after the intervention of Mulayam Singh Yadav of Uttar Pradesh and Lalu Yadav of Bihar, during presidential elections, UpYa’s skin had lost its revolutionary sheen.

Madhes actually lost the third round of post-noughties struggle before it had even begun. The constitution rushed through the parliament in mid-quakes confusions of 2015 was merely a formalization of the defeat of dignity politics. With no ideology to call its own, Madhes remains mired in caste-based politics, which suits the design of the PEON fine.

It’s said that a political movement has to be written before it can be launched. The Oligarchs of Nepali Congress and Nepal Communist Party (NCP) have a clear ideology—the politics of prosperity—which is merely a fancy name for the very old notion of cultural conservatism combined with political economy of plutocracy. There is a bipartisan consensus in the parliament that King Prithvi and Poet-pioneer Bhanubhakta are twin pillars of Khas-Arya ethno-nationalism. The Nepali Congress and NCP are also united in the belief that the labor export as the mainstay of Nepali economy and monopoly of Khas-Arya over polity and society of the country are going to be the sine qua non of Nepali democracy. Madhesis, or Janajatis for that matter, have no such comprehensive ideology to counter the ethno-nationalist hegemony.

Wily revolutionary Vladimir Ilyich Lenin once observed that there are decades where nothing happens; and then there are weeks where decades happen. Decades had happened in the first few weeks of 2007; it will most definitely happen again. History doesn’t repeat itself only as tragedy and farce; sometimes it does push the society forward.