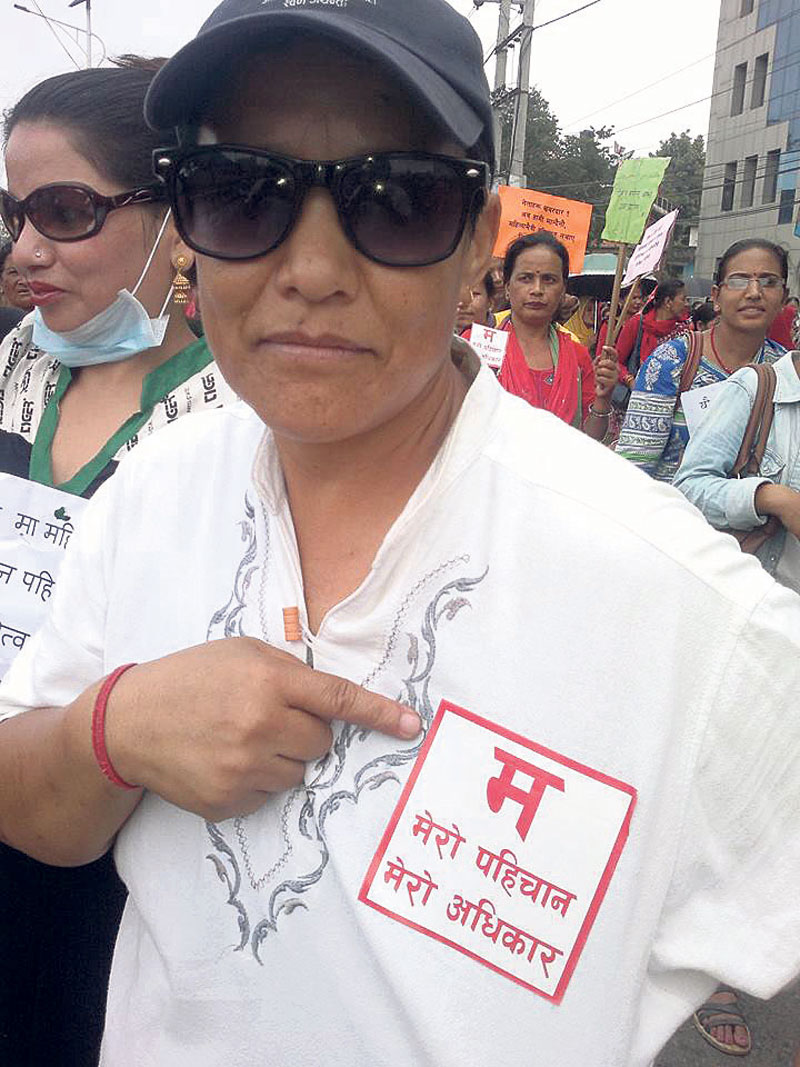 You are not held for same-sex marriage in Nepal, but you are not legally protected either. Trump’s stance on the issue can affect lives of people like us here too.
–Dilu Budija aka Badri Pun, president of IF

KATHAMNDU, Jan 24: While the 45th president of the USA, Donald Trump, was delivering his inaugural speech on Friday in Washington DC, Badri Pun, president of a gay organization in Nepal was among those compelled to listen carefully every word he uttered.

Pun, who has had two heart attacks since parting ways with his live-in partner Teju a year ago, throughout the telecast wished that the 70-year-old president puts an end to the anxiety he has spread among the LGBTI community across the world. “He is the most powerful president now and he is not liberal. So, we are anxious. He must hear my love story, he will understand, we exist, and our love is no less true than his three marriages,” said Pun, who claimed to have suffered the strokes because of the break-up.

Pun’s real name is Dilu Budija and he hails from Myagdi district. He changed his name to Badri after realizing his sexual orientation. Through the decades, he has put enormous energy to fight for gender identity. Aiming other things or thinking beyond the identity crisis hardly came his way through the years.

“It is a common story of the people born with our type of gender or sexuality. Our whole life is almost lost in telling who we are,” lamented Badri, 40. “But we must say our Supreme Court is still more liberal in many ways, though society is not in pace with it. But, yes, same sex marriage is yet to be legalized,” he added claiming that much has to be done to institutionalize rights of the LGBTI community members in the country. And this is where his fears rest.

His passionate love story with Teju and his heart attack has a direct link, Badri claims. Teju was in Chitwan when Badri was working his heart out for the rights of gender minorities through the Blue Diamond Society (BDS), in Kathmandu few years ago. Teju had heard of him but never met him. In a program in Chitwan, the two happened to come close. The transgender Badri quite impressed a stunning beauty Teju - it was love-at-first-sight. And then began a story which would be later covered by Republica as per their will to let the world know love is nurtured in hearts and transcends traditional gender and sexuality boundaries.

“I am madly in love with Badri. You may look at him differently but for me, he is the perfect one in this world and I wish to spend my whole life with him,” Teju had said during the time with this scribe. Four years down the line, Badri reports us that she left him due to pressure from her family. “Though we were living like a couple we were not recognized as couple by state law. This did not allow me to keep her as my wife and her family was not happy with it,” he said. The separation came as a great shock to Badri and his heart nearly stopped beating.

“In your case, if anything happens to you, your partner can still lead a respectful and economically sound life as your property is theirs, too. Our marriage needs to be registered as well. Let us have family life, too. We can adopt child, no worries,” Badri said calling for creating legal provisions for registering same sex marriages.

There are over 2000 same sex couples living in Kathmandu alone currently, according to the Inclusive Forum Nepal (IFN), the organization that Badri presides. And their social and legal exclusion means, both their mental and physical health remains critical than that of others.

In any given community, at least 10 percent of the population is assumed to have different sexuality. The 2011 census of Nepal was expected to bring out the exact number of gender minorities in Nepal. However, the final result displayed only male and female’s number. According to Badri, whose citizenship recognizes him as a third gender, legalizing same sex marriage is one of the prime concerns of the gender minorities in Nepal at the present. “That would be our social acceptance,” he insists.

Rights and securities of the people of this very community have always been under threat not only in the South Asia but globally, notes Saurav Jung Thapa, who on Friday participated in a protest rally against Trump in Washington DC with his same-sex partner. The ex-Budanilkatha student and now the associate director of research at the Human Rights Campaign, USA added that the march was aimed at securing everyone’s human rights.

Nepal’s LGBTI community, which had been pushing for equality, had felt a bitter shock in 2013, when its immediate neighbor India reinstated ban on gay sex. In Nepal, it is neither legal, nor illegal, Badri said. “You are not held for same-sex marriage in Nepal, but you are not legally protected either. Trump’s stance on the issue can affect lives of people like us here too,” he said.

According to sources, same sex marriage is legal in less than three dozens of countries or parts of the countries like Argentina, Belgium, Brazil, Canada, Colombia, Denmark, Norway, UK and USA, among others.

“But some nations keep criminalizing, decriminalizing or recriminalizing it, you never know,” Badri said sharing fears that gains made by Nepal towards LGBTI rights are yet to solidify and therefore vulnerable to policy changes, that he claimed, could be affected with changes introduced on the other side of the globe.

Can I get ‘long COVID’ if I’m infected after vaccination?
52 minutes ago