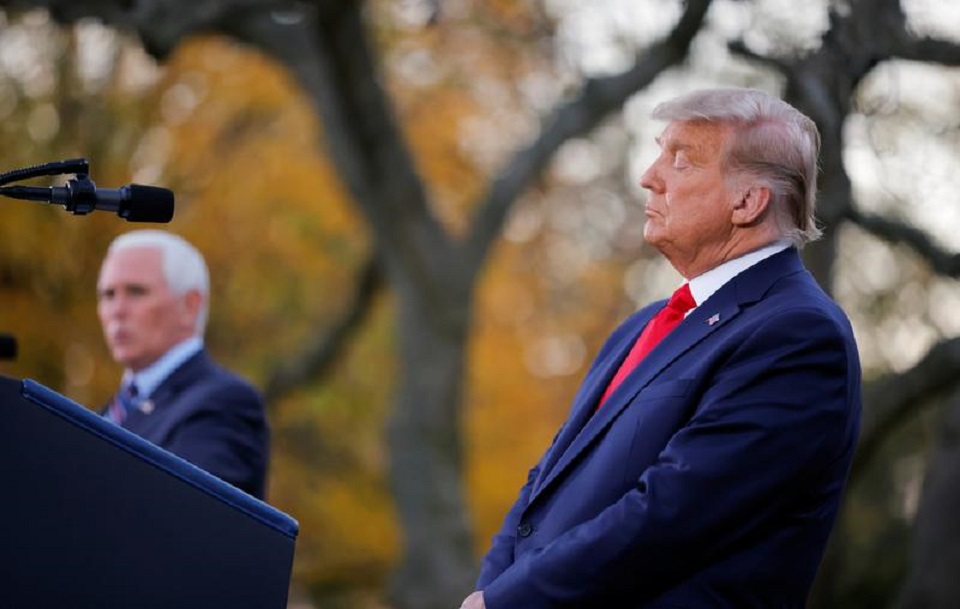 WASHINGTON, Jan 8: President Donald Trump faced the threat on Thursday of a second impeachment, a day after his supporters breached the U.S. Capitol in a stunning assault on American democracy as Congress was certifying President-elect Joe Biden’s victory.

As Democratic leaders demanded his ouster, Trump came closer than he ever has to a formal concession, acknowledging a new administration would be sworn in on Jan. 20 and vowing to ensure a “smooth transition” in a video released on Thursday evening.

The president condemned Wednesday’s violence, saying rioters had defiled the seat of American democracy and must be held accountable.

Just a day earlier, Trump had told supporters: “We love you. You’re very special,” as he urged them to go home after they broke into the Capitol.

In his remarks on Thursday, the president said: “We have just been through an intense election, and the emotions are high, but now tempers must be cooled and calm restored.

“We must get on with the business of America,” Trump, a Republican, added, adopting a conciliatory tone seldom seen from the mercurial president.

The statement was a stark reversal for Trump, who has spent months insisting he prevailed in the Nov. 3 election, alleging widespread fraud despite no evidence. As recently as Thursday morning, when he issued a statement via an aide, Trump was still claiming the election had been stolen.

In the video, he defended his efforts to challenge the election in court, saying his goal was to “ensure the integrity of the vote.”

But his exhortation on Wednesday to thousands of supporters that they march to the Capitol to protest the election results whipped up a mob that overran police officers and invaded the Capitol building, forcing members of Congress into hiding for their own safety.

The violence claimed four lives, including a woman among the demonstrators who was shot by authorities. After reports that a Capitol Police officer had died, the agency issued a statement saying they were inaccurate.

The top Democrats in Congress, House of Representatives Speaker Nancy Pelosi and Senate Democratic leader Chuck Schumer, called on Vice President Mike Pence and Trump’s Cabinet to use the U.S. Constitution to remove Trump for “his incitement of insurrection.”

The 25th Amendment allows a majority of the Cabinet to remove a president from power if he is unable to discharge the duties of the office.

But a Pence adviser said the vice president, who would have to lead any such effort, was opposed to using the amendment to oust Trump from the White House.

If Pence fails to act, Pelosi signaled she would likely reconvene the House to initiate impeachment proceedings against Trump for his role in Wednesday’s violence. House Judiciary Committee Chairman Jerry Nadler, whose committee would likely draft any articles of impeachment, voiced his support earlier on Thursday.

It was not clear whether House Democrats would have enough time to initiate and complete impeachment proceedings, with less than two weeks remaining in Trump’s term. Aides to Mitch McConnell, the Republican Senate leader, did not comment on the statement by Pelosi and Schumer.

The Democratic-led House impeached Trump in December 2019 after he pressured the president of Ukraine to investigate Biden, but the Republican-controlled Senate acquitted him of charges of abusing his power and obstructing Congress.

A handful of Republicans joined calls for Trump’s removal. The Wall Street Journal editorial page, seen as a leading voice of the Republican establishment, called on Trump to resign on Thursday evening.

Several members of Trump’s administration, including Elaine Chao, the transportation secretary and McConnell’s wife, resigned as a symbolic gesture against the violence.

Biden blamed Trump for the attack but stopped short of calling for his ouster.

“He unleashed an all-out assault on the institutions of our democracy from the outset. And yesterday was but the culmination of that unrelenting attack,” Biden said at a news conference to announce his selection for U.S. attorney general, federal appeals Judge Merrick Garland.

The president has increasingly isolated himself in the White House, relying on a small group of diehard loyalists and lashing out at Pence and others who dare to cross him, four sources said.

A source familiar with the situation said Trump in recent weeks had discussed the possibility of pardoning himself. The White House declined comment. Constitutional scholars have said it is unclear whether the presidential pardon power can be used in that way.

Trump faces potential state legal actions when he leaves office, including a criminal probe in New York, that would not be covered by a federal pardon.