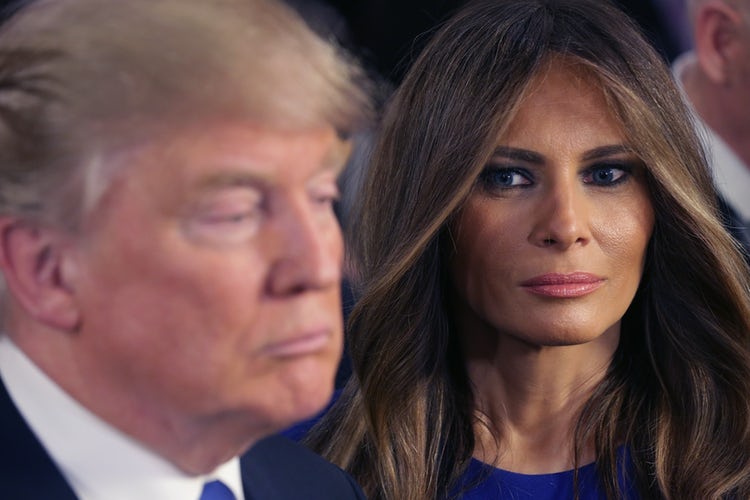 Trump continues to "enjoy' historic unpopularity, both at home and abroad. And by at home, we don't just mean in America -- we mean in his family.

Yes, Melania hates what her life has become. And she has reportedly decided that it would "Be Best" if she and her son Barron leave the White House for New York.

How is she doing? What is she thinking? Is this just a prelude to the first Presidential divorce? An insider speaks out.

An inside source tells InTouch Weekly about Melania Trump's thoughts about Trump, her marriage, and her plans for the future.

What with everything related to Trump but particularly his affair with Stormy Daniels, Melania feels humiliation "on a daily basis."

This insider assures the world that Melania has enough sense to have at least thought about leaving Trump.

"She’s been tempted to bolt."

During all of this, she "has been put through hell."

Melania never wanted to be First Lady and she never imagined that it would happen. No one really thought that Trump could be awarded the Presidency, Melania included.

"This is not the life she wants, plain and simple."

But it sounds like Melania has made her peace with her new life.

"While Donald embarrasses her constantly, she has her own agenda."

That agenda has to do with establishing a legacy of which her descendants can be proud. Because, frankly, Trump isn't going to do that.

"She wants to go down in history as a first lady of quiet grace."

Yeah, neither quiet nor grace are words that come to mind when one thinks of her husband.

But she sees her endurance and what some might characterize as silent suffering as part of her image.

"Like Jackie Kennedy, who put up with a lot but stayed the course."

It almost sounds like this is about branding, really.

But for those hoping that Melania is planning to leave Trump, it sounds like she may be too honorable to break her word.

"She promised Donald she would stay married to him as long as he was president."

That does not preclude her from divorcing him after he leaves office, whether he's voted out in 2020 or impeached and removed from office some time before that.

(Though, and I hate to be the bearer of bad news, but the justice system works very slowly and Congress works even more so -- we are halfway into 2018, and many have their doubts that an impeachment and removal can happen in the remaining year and a half)

But given that promise, it may be that no one, short of those separated from their families by Trump's callous policies or those who fear that his rhetoric and actiions will lead to their deaths, fears a Trump reelection more than Melania.

This source confirms that Melania absolutely did not see his 2016 win coming.

"The last thing she ever expected was for Donald to become president of the United States."

Her surprise is understandable. Many democracies are based more directly upon the will of the people.

The Founding Fathers imagined a Jeffersonian world in which the intellectual elite resided in sizable estates while dockworkers and traders filled cities, and so they believed that the electoral system would be a safeguard against catastrophic mistakes.

They were imperfect men and their estimation of the future was similarly imperfect.

However, Melania has begun to grow accustomed to her role as First Lady.

"But she’s starting to like the respect she’s attained."

But since she and Barron are now in New York, costing New York taxpayers $100,000 a day, she may not be accustomed to her role in the White House.

She and Trump reportedly do not share a bedroom, at the White House or in New York.

Some reports out of the White House have suggested that Trump's fixation with the media, leakers, and praise has made him extremely hostile towards his employees.

When someone is in a bad mood, sometimes the best thing to do is avoid them. That may be what Melania is doing.

Or maybe she just wants to avoid her lying, cheating husband.

FORT LAUDERDALE:  The race for the White House narrowed noticeably on Sunday as Hillary Clinton sought to shake off a renewed... Read More...

Infographics: How rich is Donald Trump?

Donald Trump has grown his wealth at a much slower rate over the last 27 years than many of his... Read More...

Fossil fuel-based vehicles should be converted into electric ones: Minister Jhakri
31 minutes ago