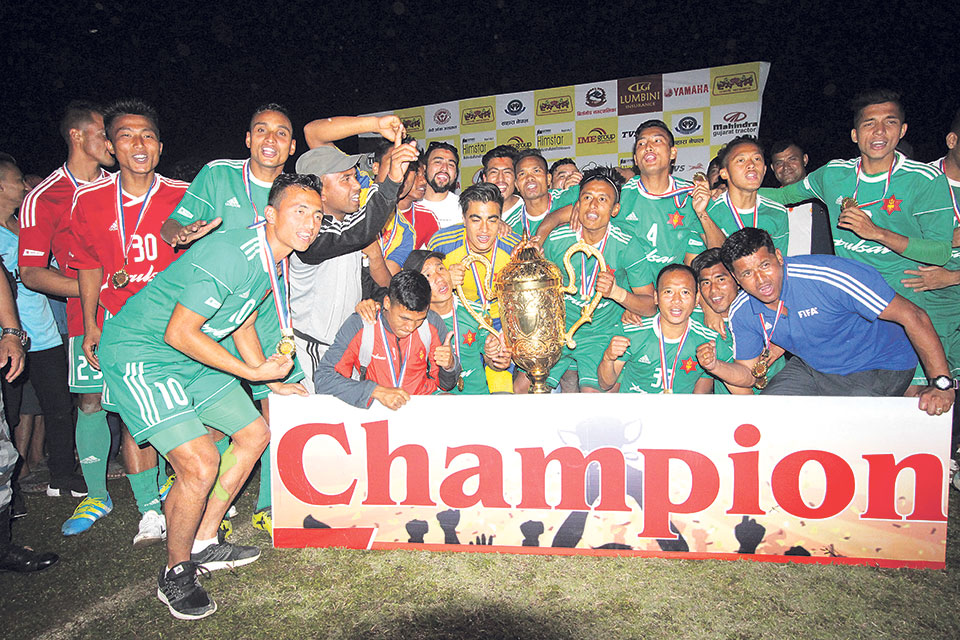 DAMAK, March 13: Host Jhapa XI has failed to win the ongoing third Jhapa Gold Cup Football Tournament despite getting a huge support from the home crowd as it faced an 8-7 defeat on sudden death in the final on Monday against departmental team Tribhuvan Army Club. Jhapa, a finalist in all three editions of the tournament, was beaten by Army in the first edition also.

At the Dom Lal Stadium in Birtamod, both the teams played a 1-1 draw in the regulation time and failed to score in the additional 15 minutes.  The game was then pushed into tiebreaker. The tiebreaker also ended in a 3-3 draw, and the game went to sudden death.

Army goalkeeper Bikesh Kuthu stopped the penalty of Jhapa goalkeeper Kishor Giri and led his team to the title on sudden death.

Both the teams played a goal-less draw in the first half of the match. Jhapa went ahead through Karna Limbu in the 49th minute as he utilized a pass from Khamir Gilson Kandangwa. Jhapa would have won the title, had it not conceded in the last five minutes of the match, but a header from Army captain Bharat Khawas in the 86th minute was all that was needed for the departmental team to push the game into extra time.

Army kept Jhapa under pressure in the latter stages of the 90 minutes, but Jhapa goalkeeper Giri denied everything that came his way.

Jhapa played an attacking brand of football in the first half, while Army sat back and defended. Jhapa wasted a lot of good chances in the second period and Army presented a good organized performance.

With the win, Army took home Rs 1.25 million as the winner, while the runner-up Jhapa was rewarded with Rs 600,000. Army dominated the individual awards as well with Kuthu winning the best goalkeeper award, while Devendra Tamang and Santosh Tamang won the best defender and the best midfielder awards respectively. Jhapa’s Yohesh Gurung won the best player of the tournament and got a bike from Yamaha, while Army’s Chun Bahadur Thapa was prized with the best coach award. All the winners were rewarded with Rs 31,000 each.

Jhapa’s Limbu was declared the highest goal scorer of the tournament with three goals and got Rs 51,000. Jhapa’s Bishwas Shrestha won the man-of-the-match and was prized with Rs 25,000 for his contribution.

A total of 10 teams comprising of A-Division outfits and an Indian team had participated in the tournament.