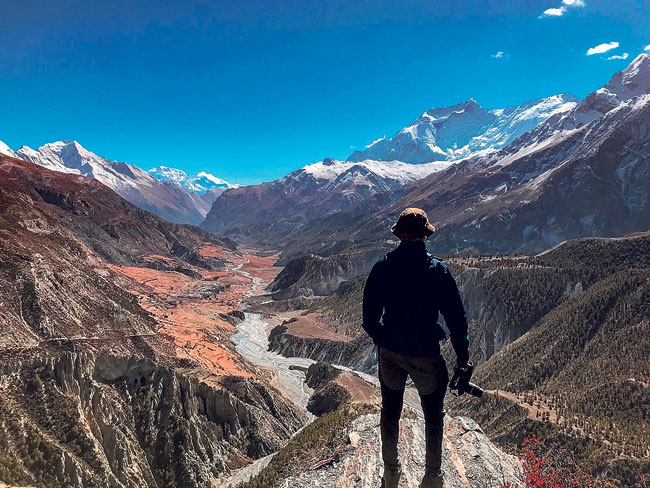 Going round young and fragile mountains, I have wondered if it’s possible to shorten our journeys and provide people some relief

“Gimme a plastic bag, please,” the exhausted passenger sucked in air, grit her teeth and moaned to the cleaner of the passenger carrier four-wheeler at Falate, a little above Ridi, proving wrong yours truly’s worst fears that she may have emptied it all out during her journey thus far. I was to know later from a fellow passenger that this passenger had started vomiting right from Tamghas, the starting point of her journey.

Before writing further about the passenger’s ordeal, let me clarify that I have no intention of making fun of her. Let me dwell a bit about motion sickness, which I think was the cause of the passenger’s suffering. As far as I understand, motion sickness occurs when your body cannot adjust itself with movement, showing associated symptoms like headache, fatigue, vertigo, depressed appetite, nonspecific malaise, nausea and nausea-induced vomiting. Different types of motion sickness are carsickness, airsickness and seasickness, which occur during travel via road, air and water, including seas and rivers, respectively.

While traveling along long and winding roads in poorly-ventilated and aged commercial four wheelers, many of who should have landed in the junkyard long ago, I have almost vomited my entrails out and put myself as the most pitiable creature on Planet Earth with tried and tested preventive measures like chewing lemon, not looking at fast-changing scenes and taking carbonated drinks/onions failing me miserably. Luckily, air and seasickness has not been able to afflict me thus far.

Unlike during several previous journeys, the collective effort of eating stuffs, drinking water, blabbering, not thinking seriously and keeping eyes off fast-changing scenes seemed to be working, though I must admit that not being able to re-read the nature’s poetry—those mountains, forests, snaking rivers and brooks—seemed to be the worst form of punishment for the not-so-obedient and quite restless child inside me. By following those gushing brooks, I could have travelled back in time and landed right at the Aangan of my Mamaghar, ensconced in my mother’s arms, to be with cousins, maternal uncles, aunts and cousins, but that was not to be. See how times change and short-change us!

Traveling back in time, one of my grannies comes to mind, smiling with her toothless gum. When we were quite young, plastic bags were not so freely available. So, dear granny used to start collecting those bags long before heading to Butwal where her son lived with wife and children, acutely aware that she would surely vomit on the journey no matter what she did.

The driver pulls up the four-wheeler by the side of Kurungkhola at Jorte for a meal and my mind comes to a halt as the empty belly craves for food. Then again, a faint voice asks for plastic and there’s no mistaking it. I have a hearty meal—my sister is not much of a foodie—and follow all precautions that are working for me apart from making frantic calls to get Bhairahawa-Kathmandu air tickets and avoid the travel’s travails that the fellow passenger is going through.

The frantic effort to land in Kathmandu via a roughly 45-minute flight fails and a mild headache develops. Worryingly, ahead lies miles and miles of long and winding road that I should overcome.

Cutting the journey short
Going round and round around young and fragile mountains, I have often wondered if it’s possible to shorten our journeys and provide people, including those prone to motion sickness, some relief.  Many countries, including China, bore through mountains, build tunnels and cut journeys short, saving time, money and the environment. Viaducts can also be effective in cutting down travel time and distance as well as protecting the environment.  I am not saying that these infrastructures are 100 percent safe, but are they not safer, more environment-friendly and economical than these serpentine and treacherous stretches?

Even if some country indeed designed and built some of our roads so as to ensure high consumption of petroleum products and fulfill its vested interests, it’s time for policymakers and planners to learn lessons, make corrections and make our road journeys shorter, sweeter and more environment-friendly, to begin with, for blame-games will land the country again in the middle of long, hard and winding roads.

Back to our little, confined world with fellow passengers. The young woman sitting next to the roadsick passenger is holding her head with her hands, probably in a desperate bid to avoid vomiting.

Touching the ground
Somewhere at Butwal, the spent passenger disembarks and our bahan speeds past her, leaving her in momentary shock. The sweating, thriving and ever-busy township at a crossroads welcomes us sporting her wide roads with milling vehicles, including e-rickshaws, slow-moving cattle and busy marketplaces.

In the generally hot climes of Butwal (the temperature there was already 26 degrees when we were there this time around, before the recent onset of hailstone), I, along with my family, used to try to cool heels in the middle of our frequent journeys to Kathmandu and back home in western hills, with my body refusing to acclimatize in a short span of time despite generous intake of cold drinks, coconut juice and the roar of the ceiling fan. These days, many families from these hills have acclimatized and made Butwal their home.

A very personal and roughly 12-hours struggle from Falate to Butwal to Kathmandu comes to an end at around 8 pm after the vehicle religiously circumscribes several hilly sections, including Kurungkhola, Srinagar, Malmul, Daunne and Nagdhunga, with my head spinning and non-stop sad folk songs blaring from the stereo system numbing me further by transporting me the canon fodder from the hills of Nepal to Kashmir, the Falklands and other conflict hotspots as well as 3D (dirty, difficult and dangerous) job destinations.

The biggest relief is that I somehow manage to not belch out all this time around, though I haven’t found out a perfect formula that prevents vomiting on a 12-hour road travel.

KATHMANDU, April 27: Nepal Tourism Board (NTB) has said that offered its diverse tourism endowments to the Arabian travelers from... Read More...

Two arrested for raping and murdering a minor
35 minutes ago