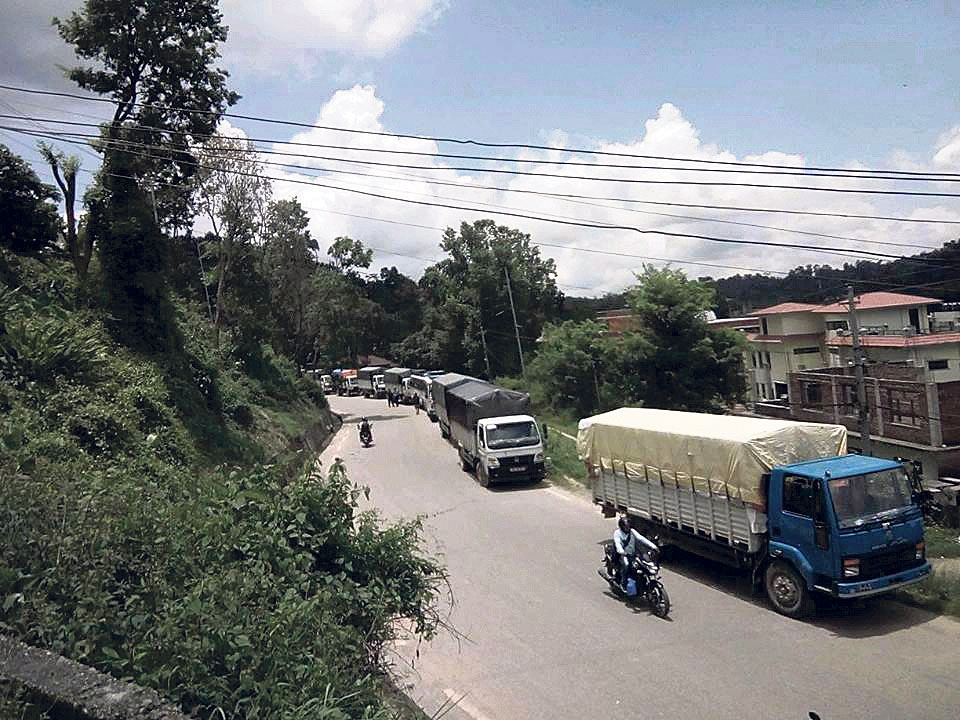 Transport operators staging protests on BP Highway at Sindhuli demanding that the government lift the ban on heavy vehicles.

SINDHULI, July 15: Transport entrepreneurs on Saturday obstructed vehicular movement on the BP Highway for three hours, in a bid to pressure the government to reverse its decision to ban the movement of large vehicles on the highway.

The protest was started on Thursday obstructing traffic on the highway for an hour. BP Highway is the only alternative route to exit from Kathmandu in case the Mugling-Thankot road is obstructed.

To put pressure on the government, transport entrepreneurs have been increasing the obstruction hours. They have warned of obstructing vehicular movement for four hours on Sunday.

The protest started one and a half months ago after the government banned  large vehicles from plying the highway following a Supreme Court (SC) order. This is the reason why the bus and truck entrepreneurs’ associations have been lining up their vehicles along the highway as a part of their protest these days. Vehicles without permit have been prohibited on the highway.

Responding to a writ petiotion, the SC had issued an interim order prohibiting vehicles heavier than 10 tonnes from operating on the highway. Later, the apex court decided to allow buses with 25 seats and small trucks to operate on the highway. The local administration too started strictly monitoring the movement of vehicles after the SC order. “Vehicles without route permit have been banned. We are just following the order of the higher authorities,” said Chief District Officer Gyan Prasad Dhakal.

On May 27, acting as per the decision of the Ministry of Physical Infrastructure and Transportation, the Department of Transport Management allowed passenger vehicles with maximum of 32 seats to ply the highway from 5 am to 8 pm. While cargo vehicles weighing up to 16.2 tonnes were allowed to operate from 9 pm to 5 am.

Transport entrepreneurs have been lining up their vehicles on the highway obstructing two-way traffic. “Earthquake victims have not been able to carry their construction materials on time,” said Kanchaman Bal Tamang, chairperson of BP Highway Transport Entrepreneurs’ Association, adding,” We have been protesting against the syndicate imposed on the basis of seats.”

Tamang warned that the protest would continue until the court delivers a verdict in their favor. “We have bought our vehicles on installments. If they won’t allow us to operate our vehicles, how will we earn our living?” questioned a truck driver.

On Friday, the transport entrepreneurs obstructed two-way vehicular movement for an hour while on Saturday they did so for three hours.

KATHMANDU, May 31: Despite the high risk of road accidents along the BP Highway, the Department of Transportation Management has decided... Read More...

KATHMANDU, May 29: The Department of Transport Management has issued new directives for public vehicles movement permissions in the BP... Read More...

Public vehicles with more than 18 seats banned on BP Highway

SINDHULI, May 19: Public vehicles having more than 18 seats have been prohibited for operation along the BP Highway. The... Read More...

Over 10,000 people enter Nepal via Gaddachauki in a week for Dashain
8 hours ago

US Acting Assistant Secretary Trudeau in Kathmandu
9 hours ago