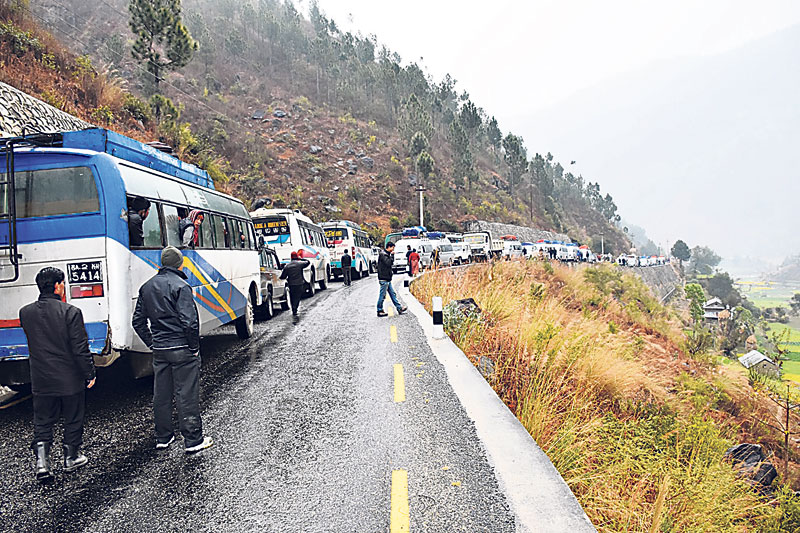 BANEPA, Sept 30: The government’s decision to allow heavy vehicles on the BP Highway has locals and other stakeholders worried about road safety.

A committee formed by the Ministry of Physical Infrastructure and Transport (MoPIT) recently submitted a report recommending to the ministry to allow heavy vehicles (up to 28-seat capacity) to ply the highway that runs from Banepa through Sindhuli to Bardibas.

Earlier, another committee formed by the ministry had suggested not allowing heavy vehicle on the highway, bearing in mind the durability of the road and the safety of passengers.

Local stakeholders, including the district traffic police office and the district administration, are in favor of banning heavy vehicles from the highway to ensure safety, according to Bharat Kaji Debaju, chief of the highway project.

The highway is not suitable for speeding. The section from Bardibas to Sinduli is suitable for a maximum speed of 40 km per hour. The speed should not exceed 30 km per hour in the rest part of the highway, he informed, adding that it does not have two lanes to allow heavy vehicle to pass each other easily.

Speeding on this highway is always an invitation to accidents, said

Shukadev Khanal, traffic police inspector at District Traffic Office, Kavre. “The traffic on the highway is already more than capacity. The road has innumerable bends. Competition among vehicles to overtake often results in bad accidents,” he said.

With heavy traffic and the use of heavy vehicles, there has been damage to various parts of the road. “The construction of the road was of such high quality that it should not have required maintenance for five years had heavy vehicles not been allowed,” Debaju said.

Alarmed by the frequency of road accidents, the government implemented a time-card rule, but this has not been effective. Under the rule, it should take a minimum 5.10 hours to travel from Koteshwar to Bardibas. “Overspeeding is rampant due to lack of traffic police at different points,” said Sudarshan Subedi, vice chairperson of Panauti Chamber of Commerce and Industry. Drivers simply speed along most of the road and then take a rest at one point to use up the mandatory 5.10 hours, he said.

According to a study carried out by the maintenance section of the road project, 134 people have lost their lives and 383 others have been severely injured in 133 road accidents on the highway between 2008 to 2014.

without route permits, according to Subedi of the Panauti Chamber. And according to Khanal, there are not enough personnel to oversee the traffic movement. One traffic policeman has to oversee more than 75 vehicles every day.

KATHMANDU, May 31: Despite the high risk of road accidents along the BP Highway, the Department of Transportation Management has decided... Read More...

Minister for Physical Infrastructure and Transport Ramesh Lekhak said that the government will not allow heavy vehicles to ply the... Read More...