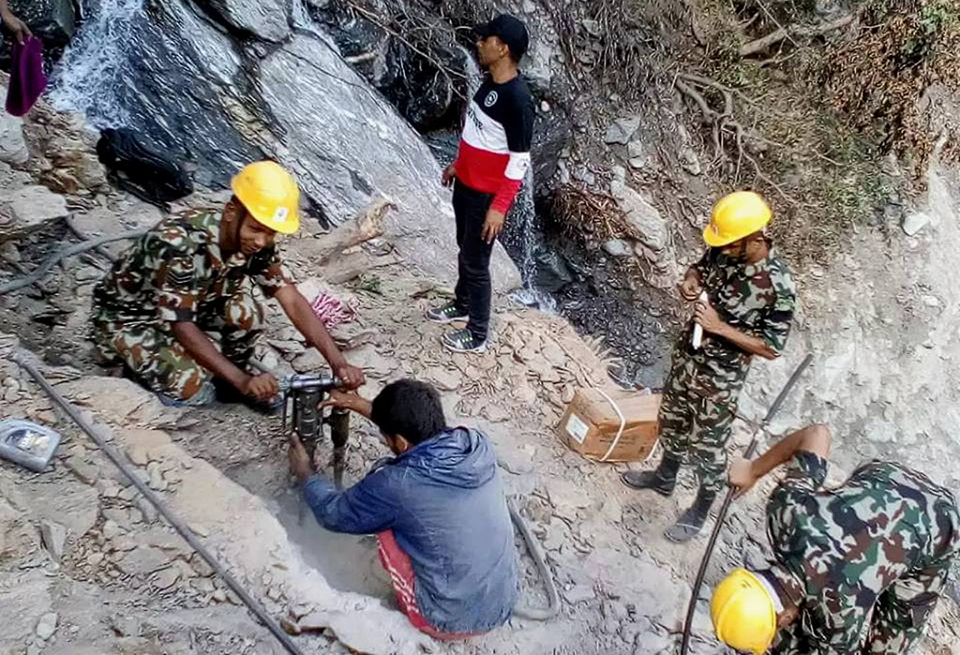 LAMJUNG, Oct 1: After 19 days of obstruction following numerous landslides along the Marsyangdi River, vehicular movement has finally resumed in Lamjung-Manang road section, which is the only route to reach the mountainous district of Manang.

On September 12, numerous landslides struck along the Marsyangdi corridor after torrential rainfall. After clearing the debris and repairing the damaged road, vehicles were allowed to ply from Sunday afternoon. The landslides had damaged around 30 kilometers of the road starting from Kharkhare of Besisahar Municipality to Chyamche of Marsyangdi Rural Municipality.

Bahnu Joshi, chief engineer at the Divisional Road Office, Damauli informed that the road along Marsyangdi-3, Arkhalebesi and ward no 4 of Rambazaar sustained the most severe damages. He informed that Nepal Army had to use Improvised Explosive Devices (IEDs) to clear the debris in Chahare of Bahundanda.

However, there are some places such as Ghoptebhir where the risk of landslides is still hovering. Joshi says there is no immediate solution to this. According to Chief District Officer Jhanknath Dhakal, the road was cleared with the coordination of District Administration Office (DAO), Divisional Road Office, Damauli, Nepal Army, District Police Office and Butwal Power Company.

He says coordination between various authorities made it possible for them to open the track without any delay. "The locals had not expected that they would be able to travel along this road so soon," said Chief District Officer Dhakal, adding, "However, we were successful in managing and deploying enough people for clearing the debris." The district authorities took immediate measures to clear the road because of the approaching Dashain festival and the onset of tourism season.

Earlier, provincial assembly members had reached to the site for observing the condition of the road. After observing the condition of the road, provincial assembly member Dhananjaya Dawadi stated that efforts were taken for prompt repair and maintenance of the road. Resumption of vehicular movement before Dashain offered huge respite to the locals. In the last three weeks, people were obliged to take a detour carrying their goods on their backs.

Domestic and foreign trekkers had to go through several hassles due to the road obstruction.

CHITWAN, Sept 3: Traffic along the Narayangadh-Muglin road which was disrupted following landslides at multiple places in the road section... Read More...