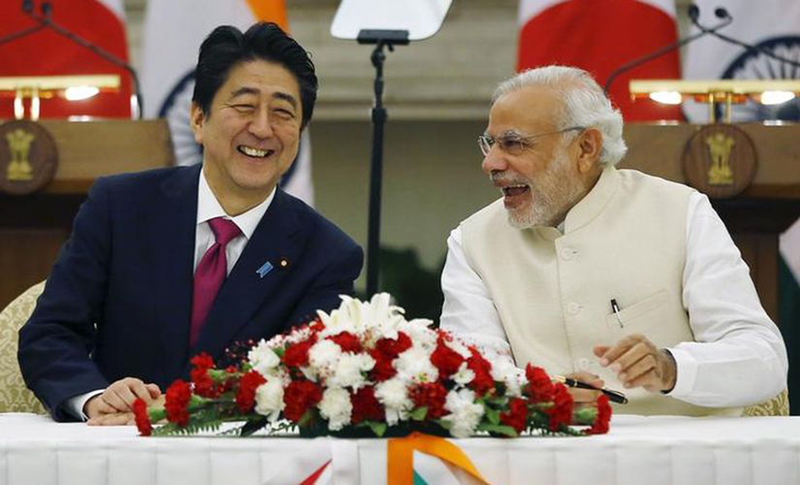 India and Japan are demonstrating that, through diplomacy and trade, Asia’s major powers can frustrate the Chinese.

CLAREMONT: When US President Donald Trump withdrew the United States from the Trans-Pacific Partnership (TPP) this past January, many observers saw that decision as a boon for China. If so, it may not last.

The conventional wisdom is based on simple economic and geopolitical logic. China has become every other Asian country’s largest trading partner, inexorably gaining strategic leverage as a result. As China’s neighbors grow increasingly dependent on the Chinese market, the logic suggests, America’s influence in the region will gradually decline.

Former US President Barack Obama’s administration understood the far-reaching geopolitical consequences of China’s economic dominance in East Asia. Obama and his advisers had hoped that, by creating a new US-centered trading bloc, the TPP would counter China’s clout and preserve American military and economic primacy in the world’s most dynamic region.

But while the consensus view that Trump has effectively ceded East Asia to China is not necessarily wrong, it overlooks a fundamental geopolitical fact: American preeminence has created a powerful incentive for free riding in East Asia. As the region’s countries have grown accustomed to the US-furnished security umbrella and free-trade system, they have not invested in their own national and economic security. When they can no longer count on US-supplied public goods to maintain peace and deliver prosperity, they will face some tough choices.

One group of countries will undoubtedly jump on the Chinese bandwagon, hoping that closer ties with Asia’s future hegemon will give them what the US provides now. This bloc includes countries ruled by autocratic regimes that have no ideological or territorial disputes with China, such as Thailand, Malaysia, Cambodia, and Laos.

Other countries have already adopted a hedging strategy, whereby they maintain close security relations with the US while taking advantage of China’s enormous market. Australia, South Korea, and Singapore may fall into this category.

But a third group of countries appears to have opted for a self-help strategy. As American protection and oversight of free trade have become increasingly uncertain, they have taken proactive measures to counter Chinese power on their own, not least by banding together.

The countries leading this charge are India and Japan—two great powers that cannot imagine living in a China-dominated Asia. They are joined by countries such as Vietnam and Indonesia, which have also resisted falling into China’s orbit.

India and Japan are demonstrating that, through diplomacy and trade, Asia’s major powers can frustrate Chinese ambitions on their own. To see this dynamic at work, we need look no further than Japanese Prime Minister Shinzo Abe’s recent declaration that Japan will continue to push ahead with the TPP. To be sure, without US participation, the remaining 11 Pacific-rim countries will have much less economic heft than they would have had under the original deal. But in 2016, these countries’ combined GDP still exceeded US $10 trillion, which is only slightly less than China’s GDP of $11 trillion.

The TPP has not yet been ratified by all of its 11 remaining signatories. But if these countries can come together and push the agreement through, one can imagine that other Asian powers such as South Korea and Indonesia will be tempted to join. These new additions, and the formation of a new regional trading bloc, could partly fill the void left by America’s withdrawal.

Of course, a self-help strategy to counterbalance China is not guaranteed to succeed. Leadership and substantial sacrifice will also be critical. In the immediate aftermath of World War II, the US opened its markets and deployed its immense financial resources to reconstruct Japan and Western Europe’s devastated economies. The Marshall Plan and other similar measures were part of America’s Cold War strategy against the Soviet Union. And, in retrospect, we now know that these enlightened economic policies played just as crucial a role as military superiority in winning that conflict.

Fortunately, Asia today is not in the grip of a cold war. But leading powers such as Japan and India must show that they are ready and willing to bear the costs of maintaining the region’s balance of power, and to prevent the emergence of a Sino-centric Asia.

Abe has declared his resolve. Now he must back up his words with action. To persuade wavering Asian countries to band together, rather than submit to China, Japan will have to adopt policies that demonstrate its willingness to absorb the high costs of keeping itself and its partners outside of China’s orbit. If Abe’s Japan delivers on its pledge, even a smaller TPP could give China a run for its money in Asia.

KATHMANDU, Feb 22: The Tribhuvan University's Office of the Controller of Examinations, Balkhu on Wednesday published the results of BBS second... Read More...

Nepal’s Experience with the UN
19 hours ago

Melamchi water should also be delivered to areas outside KMC: Pradeep Paudel
11 hours ago