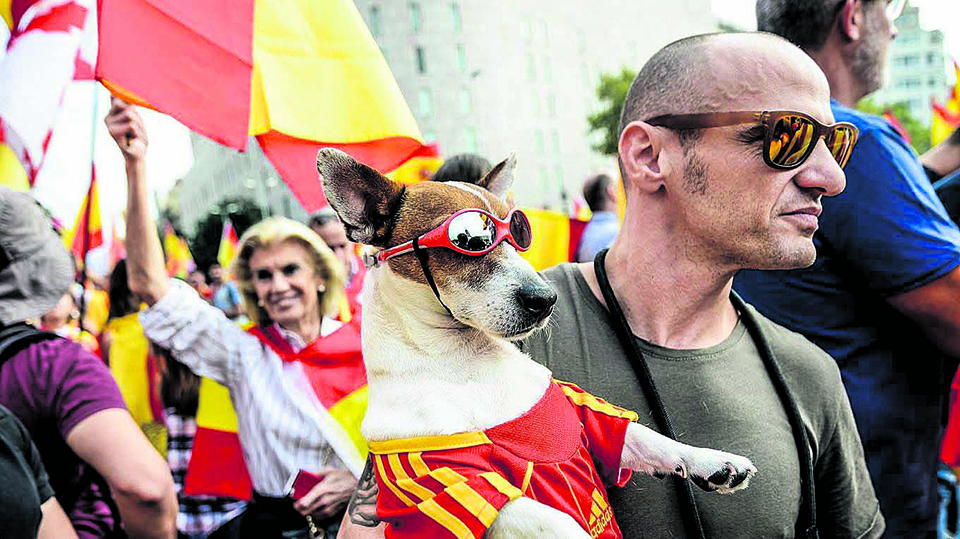 The long-term trajectory of US-China relations is almost certain to be characterized by escalating strategic conflict, and potentially even a full-blown cold war

CLAREMONT, CALIFORNIA – For most observers of the unfolding trade war between the United States and China, the casus belli is the convergence of China’s unfair trade practices with US President Donald Trump’s protectionist credo. But this reading misses a critical development: the demise of America’s decades-long policy of engagement with China.

Trade spats are nothing new. When allies engage in such disputes—as the US and Japan did in the late 1980s—it is generally safe to assume that the real issue is economic. But when they happen between strategic rivals—such as the US and China today—there is likely to be more to the story.

Over the last five years, Sino-American relations have changed fundamentally. China has increasingly reverted to authoritarianism—a process that culminated with the elimination of presidential term limits last March—and pursued a statist industrial policy, embodied by its “Made in China 2025” plan.

Moreover, China has continued to construct islands in the South China Sea in order to change territorial facts on the ground. And it has plowed forward with its Belt and Road initiative, a thinly veiled challenge to America’s global primacy. All of this has served to convince the US that its China engagement policy has utterly failed.

Though the US has yet to formulate a new China policy, the direction of its approach is clear. The latest US National Security Strategy, released last December, and National Defense Strategy, released in January, indicate that the US now views China as a “revisionist power” and is determined to counter Chinese efforts to “displace the US in the Indo-Pacific region.”

It is that strategic objective that underlies America’s recent economic maneuvers, including Trump’s extravagant demand that China cut its trade surplus with the US by $200 billion in two years. In addition, the US Congress is about to pass a bill restricting Chinese investments in the US, and plans are being drawn up to limit visas for Chinese students who study cutting-edge science and technology at US universities.

The fact that the current trade spat is about more than economics will make it much harder to manage. While China might be able—with substantial concessions and a healthy dose of luck—to avoid a devastating trade war in the short term, the long-term trajectory of US-China relations is almost certain to be characterized by escalating strategic conflict, and potentially even a full-blown cold war.

In such a scenario, containing China would become the organizing principle of US foreign policy, and both sides would view economic interdependence as an unacceptable strategic liability. For the US, allowing China continued access to America’s market and technology would be tantamount to handing it the tools to beat the US economically—and then geopolitically. For China, too, economic disengagement and technological independence from the US, however costly, would be viewed as critical to stability and to securing the country’s strategic goals.

Decoupled economically, the US and China would have far less reason to exercise restraint in their geopolitical competition. To be sure, a hot war between the two nuclear-armed powers would remain unlikely. But they would almost certainly engage in an arms race that fuels overall global risk, while extending their strategic conflict to the world’s most unstable areas, potentially through proxy wars.

The good news is that neither the US nor China wants to become enmeshed in such a dangerous and costly cold war—one that would likely last decades. Given this, a second scenario—managed strategic conflict—is more likely.

Under this scenario, economic disengagement would occur gradually, but not completely. Despite the adversarial nature of the relationship, both sides would have some economic incentives to maintain a working relationship. Similarly, while both countries would compete actively for military superiority and allies, they would not engage in proxy wars or provide direct military support to forces or groups engaged in armed conflict with the other party (such as the Taliban in Afghanistan or Uighur militants in Xinjiang).

Such a conflict would certainly carry risks, but they would be manageable—as long as both countries had a disciplined, well-informed, and strategically minded leadership. In the case of the US, however, such leadership is nowhere to be seen today. Trump’s erratic approach to China demonstrates that he has neither the strategic vision nor the diplomatic discipline to devise a policy of managed strategic conflict, much less a doctrine (like that created by President Harry Truman in 1947) to pursue a cold war.

This means that, at least in the short term, the most likely trajectory of Sino-American relations is toward “transactional conflict,” characterized by frequent economic and diplomatic spats and the occasional cooperative maneuver. In this scenario, bilateral tensions will continue to mount, because individual disputes are settled in isolation from one another, based on a specific quid pro quo, and thus lack any strategic coherence.

So, however their current trade spat plays out, the US and China seem to be drifting toward long-term conflict. Whatever form that conflict takes, it will entail high costs for both sides, for Asia, and for global stability.

The current US-China trade conflict has been decades in the making; rolling it back will require both sides to acknowledge... Read More...