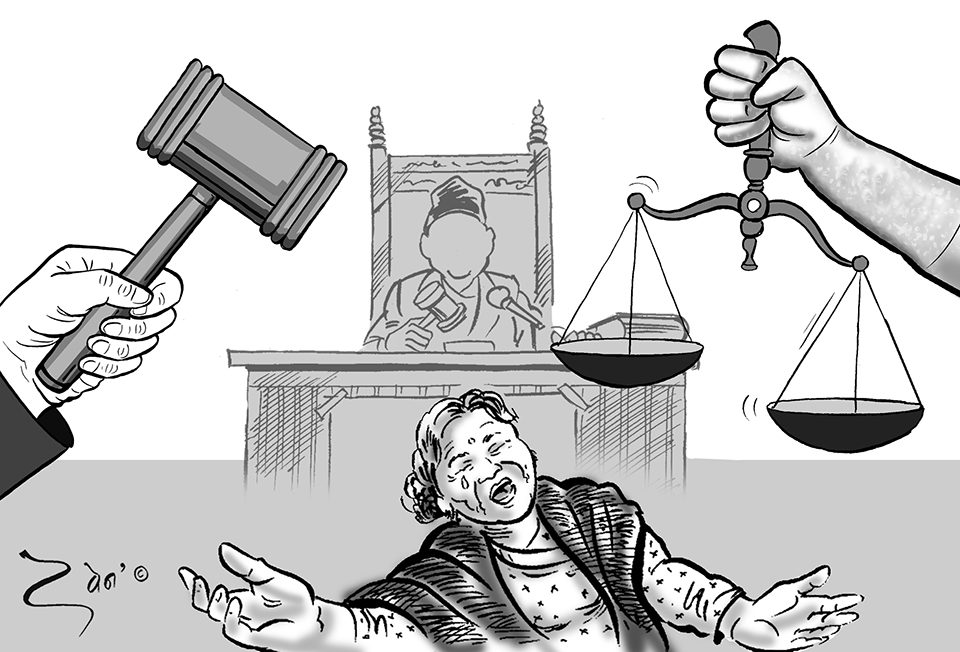 Charter initiative may further empower perpetrators rather than victims. Dialogue can help us unite

The split currently seen in Conflict Victim Common Platform (CVCP), is unwarranted for we conflict victims and Human Rights Defenders (HRDs) have much in common.  Consider the history. History did not begin with the so-called ‘victim charter’ and ‘political mechanism’ now being supported by Swiss and others.  In March and April of 2018, conflict victims and HRDs were presented with an amendment proposal on Enforced Disappearances Enquiry, Truth and Reconciliation Commission Act by government representatives.  We were invited to ‘trust’ that process, even when its proponents denied the truth about conflict era harms by stating, “it is not clear” that crimes against humanity and war crimes occurred.

Victim leaders resisted.  The CVCP decided to remain ‘critically engaged’.  They initiated their own consultations across Nepal.  On September 18, 2018, they met again and made progress toward a common agenda.  It included effective TJ commissions, respect for Nepali and international law and meaningful participation by conflict victims.

We fear that charter initiative may further empower perpetrators rather than the weakly organized victims. We think dialogue about these concerns can help us unite around our shared aspirations.

Since the donors have a major role in ‘charter’ initiative, we need to address them too, before we make suggestions about a dialogue.  Donors need to be clear that, in Nepal’s political context, to suggest that victims ponder what ‘no deal’ looks like is to scare them.  It is to threaten torture victims with years of more suffering without medical care.  It is to threaten families of the disappeared with more years of suffering without truth or recognition.  It is to threaten women victims of sexual violence with more years of isolation, neglect and trauma.  It was this fear of being left out of a deal that motivated many (if not most) victims to submit information and evidence to the TJ commissions.

Charter initiative is not in line with human rights-based approach.  Our donors should be aware of this and how this approach is used, sometimes without their knowledge, sometimes with their money.

Yes, an overwhelming number of conflict violations require alternative ‘transitional’ mechanisms. Yes, we require innovative ideas about case selection, prosecution and sentencing. We also need to figure out how to combine truth, justice, reparations, and non-repetition in the best way possible. But for this we need to discuss these three issues in depth.

But no one should provide advice on these ‘transitional’ issues without, in the same breath, reaffirming the core ingredients of ‘justice’: the right of a victim to a remedy, the obligation of the state to provide one, and the need for serious crimes to be dealt with seriously.

Those who wish to support dialogue in favor of transitional justice must be clear that it is also about preventing a repetition of harms.  As Mohna Ansari recently wrote in The Kathmandu Post, “past impunity shapes present impunity”.  A just response by the State to Maina Sunwar would have resulted in a more just response to Nirmala Panta.  We must think about our children and grandchildren.

A dialogue process can help us to unite around a common understanding of what has brought us to this point.  It will help us to unite around a shared vision of the future.  Looking back as we look forward, our pathway may have many twists and turns, but we will never give up on the simple idea that a victim of arbitrary power—of what we call ‘crimes’ because they offend our dignity—deserves a remedy.  Our constitution and our international obligations tell us that this is our right.  This is the foundation for our dialogue.

Donors need to realize that in hidden corners of our country, at this very moment, and in the next, some mother or father or brother or sister is living in social isolation, disconnected by the past from their children’s present, unable to understand what is or is not being offered for the harms they have suffered, or what further documents they must supply to get this or that benefit.

There are those who are unable to walk properly, confined to a shop and selling candies to school-kids for a living while the wounds of their torture continue to press on their broken spine, for which they are told there is no remedy, medical or financial, moral, legal, or political.  There is a victim of sexual violence who despairs and retreats into her hidden pain when she sees the whole machinery of impunity in front of her.  There is someone who once heard of a united Common Victim Platform who now hears rumors that it is divided.

Let us get past this division.  Let us unite around the victims of arbitrary power who are today’s leaders in ensuring that our future generation will not face the same fate.  Let us never be complacent about the State’s obligations to protect and respect the dignity of its citizens.  Let us reaffirm the right of the victims of arbitrary power to obtain a remedy.  We may have difficulty saying exactly what amounts to a just remedy, but all of us easily recognize it by its absence, and all of us have long and important experience on how to sit together in dialogue in order to fill this void.

To give up on a just remedy is to give up on our future.  We can start with this common wisdom in order to reunite on our common platform.

If the voices of the victims are ignored and justice process is put on hold like this, Nepal’s TJ process... Read More...

Many reports have pointed out that the police hardly register the cases of crimes of caste-based discrimination and rarely carry... Read More...