To Beijing for ritual 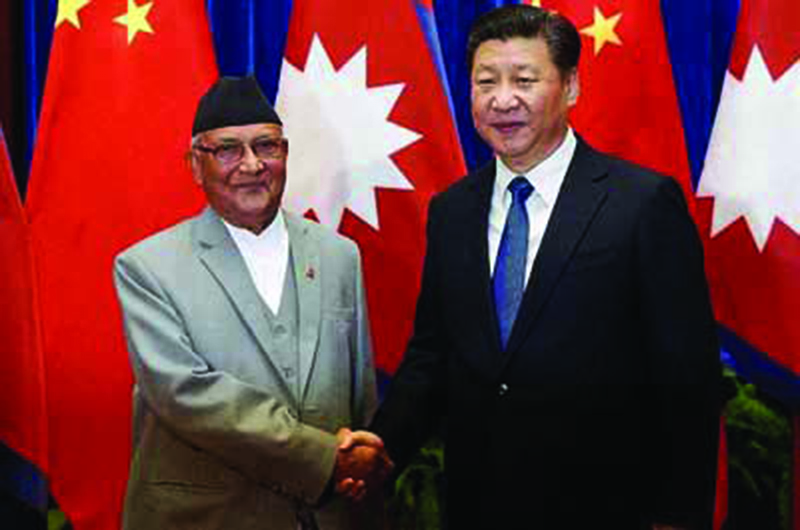 Oli reminds Beijing of leopards not changing their spots, whereas New Delhi embraces him as a prodigal son back on track after straying onto the wrong meadow in 2015

High on the heels of his April 6-8 India visit, Prime Minister KP Oli is leaving for China on June 24 for a three-day visit but not without the burden of trust deficit. Chinese embassy officials at dinner gatherings in Kathmandu might sound somewhat smug over Beijing having nudged the CPN-UML and Maoist Center to come together as a single party, but their government is very cautious with government in Nepal.

In what is likely to be another ritual-as-usual trip, official trappings might not be matched with equal substance. Leaders, especially from developing countries, cast their eyes on the publicity binge foreign visits generate, even if they are destined to be mere trophy items.

Oli expressed difficulty in attending this year’s Boao summit. This was not a reassuring gesture to Beijing considering that King Birendra was chief guest at the 2001 inaugural summit. Once might be a happenstance, twice could be a chance but thrice or more forms a pattern.

Oli’s government, it may be recalled, prematurely announced Xi Jinping’s visit to Kathmandu in 2016, and Beijing postponed it indifinitely suspecting a deliberate Delhi-inspired slight. Indian Prime Minister Narendra Modi last month did on Oli precisely what Oli had done on Xi by declaring dates without mutual clearance.

Modi has felt and found Oli’s pulse of second innings in office comfortably accomodative. Oli endorsed Delhi’s unilaterally designed and declared itinerary of Modi’s Nepal visit traversing the Tarai in Janakpur, Mustang in the north bordering China, and Kathmandu in the mid-hills.

Oli reminds Beijing of leopards not changing their spots, whereas New Delhi embraces him as a prodigal son back on track after straying onto the wrong meadow in 2015 when he stood stridently against India-orchestrated economic blockade on landlocked Nepal. At Janaki Temple, the guest and the host were seen in identical attire Modi arranged for. To foreign rationalist communist breed, it was an inconrguous appearance by a fellow comrade and, as Western media are wont to describe Modi, a demonstrative Hindu nationalist.

Getting Federal Socialist Forum Nepal on board the government before the Beijing visit does not change northern neighbor’s position. China thinks Yadav will fall for rest of Madhes-based parties’ agenda when the crunch comes.

Chinese university professors, projected as Nepal experts, label the co-presidents of the unified Nepal Communist Party (NCP), Oli and Pushpa Kamal Dahal, as two sides of the same coin. Bishnu Paudyal’s appointment as NCP General Secretary has pleased but not surprised New Delhi, though many senior leaders in the party remain uncomfortably surprised.

In March 2017, Pushpa Kamal Dahal barely managed to have a 15-minute pleasantry with Xi. Dahal flew to Beijing for the brief session with Xi after attending the Boao Conference. Xi’s operative word on bilateral ties was “trust”, which Dahal then and Oli now have not been able to supply convincingly.

One of the advisors to then Prime Minister Dahal was overheard seething with rage over a remark by a Chinese professor, who he disparagingly described as “that Bhotay” with the nerve to question Krishna Bahadur Mahara’s shuttle between Beijing and India. “He comes here and soon after goes to New Delhi. What’s he up to?” The professor was quoted as saying.

The government’s naïve request to Beijing for timing Oli’s official visit to China with Shanghai Cooperation summit in order to enable him to be present at the international meet came in for a polite refusal. This contrasts sharply with China’s support to Nepal when India clamped a throttling 15-month trade blockade in 1989/90. During his Nepal visit in November 1989, Chinese Premier Li Peng said: “China understands [the] current situation in Nepal. We consider it unjustified for a neighboring country to impose blockade against Nepal because the direct victims of this blockade are ultimately the Nepalese people.”

In the post 1990-period, Beijing remains reluctant to making such explicit show of support. It took a back seat with deafening silence over New Delhi’s 2015 rib-rattling trade blockade. The presence of “Free Tibet Movement” advocate Karma T Gyalsten at Nepal Embassy reception honoring Oli in April was another pinprick.

In 2008, dozens of people were killed in Tibet following violent demonstrations. Beijing believes the arms carried by some rallyists were supplied through Nepal’s Tatopani bordering Tibet. The Khasa road on the Chinese side consequently remains closed after the 2015 earthquake. Opened in 1967, the Arniko Highway was constructed after King Mahendra brushed off the West’s warning that the road with communist China posed a direct threat to monarchy, and retorted: “Communism does not travel by a taxi.”

Aware of the highway’s symbolic value, Beijing is unlikely to overstretch the existing stalemate, lest it is construed as another form of blockade. Nepal’s geographical position is of inestimable value to the regional and far-off powers. Keeping it vulnerable suits foreign forces keen on ideological and strategic raids on China.

Beijing expressed deep displeasure over an alleged meeting between Nepali Congress President Sher Bahadur Deuba and Tibetan government-in-exile’s Prime Minister Lobsang Sangay, when they attended a program organized in Goa by India Foundation, which is close to Modi’s party. Although New Delhi is against Kathmandu getting chummy with the northern neighbor, Beijing does not expect to supplant Indian presence and influence in Nepal but is keen to ensure its security interests are not threatened. Recall that in late August 1974, the last of Khampa rebels left Nepal’s Mustang Valley to India, eight months after China’s Chairman Mao Zedong asked King Birendra in December 1973 to address the issue.

Whereas India is an emerging economy and major military power with semi-democratric credentials, China stands as one-party communist dispensation whose impending position as the world’s first economy within the next decade and a half is a World Bank certainty. China’s military prowess is barely unsheathed but acknowledeged worldwide.

Delhi’s recent shift in policy toward China is palpable. In deference to Beijing’s sensitivity, India’s Cabinet Secretary PK Sinha recently directed high-level officials that it was “not desirable” for them to attend programs celebrating Dalai Lama’s life because of “the sensitive nature of the subject”.

In another sign of the times, Chinese Ambassador to Nepal, Yu Hong, traveled to the Tarai district of Dhanusha early this year to hand over relief materials to 3,400 families affected by floods. Contrast this with the alarm New Delhi raised in the late 1980s over steps by Nepal’s government for approving a warehouse construction by a Chinese company in Tarai. Moreover, Beijing has of late tried testing more uncharted waters by offering to build an industrial estate in Oli’s home district of Jhapa, abutting India. In March last year, Chinese Defence Minister General Chang Wanquan, on a visit to Kathmandu, when Dahal was prime minister, proposed an enhanced bilateral defence and security cooperation. Next week, Oli is likely to dodge or defer the issue in deference to New Delhi’s sensitivity.

A railway now connects Lhasa and Xigatse in Tibet, raising Oli’s wishes that the link would be extended to Nepal. Beijing is aware of its leverage but is not likely to speed up the matter unless Kathmandu convinces that third party interests will not be routed through such links at its expense. Predictably, the Oli team will return home claiming the “successful” visit having taken bilateral ties to a “new height”, citing Beijing’s new list of pledges and agreements but without any energetic commitment. To wit, quantum of concrete cooperation springs from the depth of trust.

Beijing faces decision on how to respond to Trump's tweets