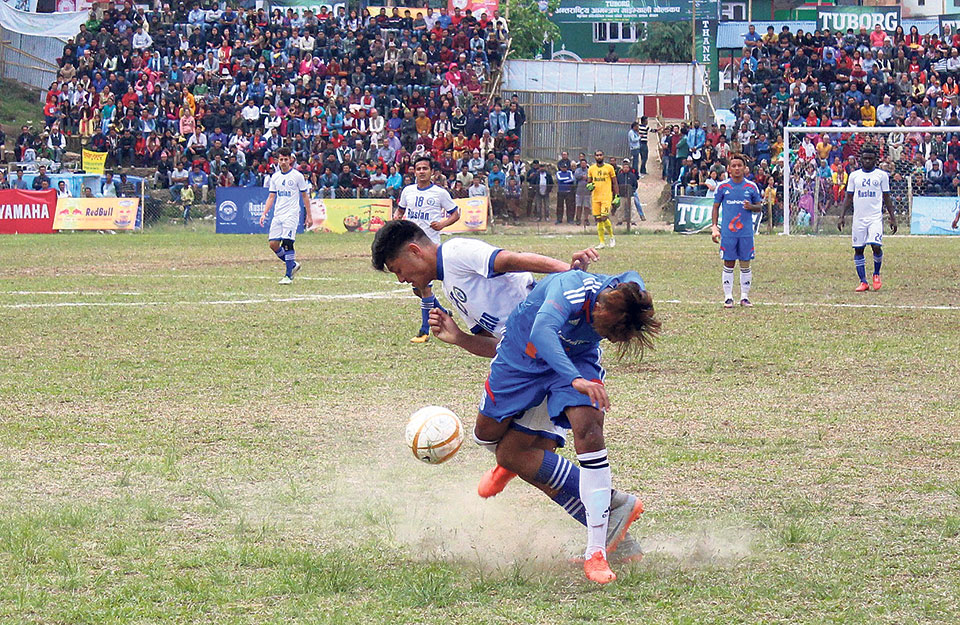 Bimal Gharti Magar scored his first to put Three Star in the lead in the injury time of the first half as he utilized a pass from captain Nirajan Khadka.

After going 1-0 down in the first half, Armed Police displayed an attacking performance in the second period, but could not score. African player Ajayi Martin doubled Three Star’s lead in the injury time of the second half as Magar dribbled past several players on his way and created for Martins to score.
After scoring one and assisting one, Magar was named the man-of-the-match and was rewarded with Rs 10,000.

Three Star kept Armed Police under pressure throughout the match, but despite creating many chances in front of the goal, the departmental side could not find the back of the net. Santosh Shrestha got a very good chance in a one vs one against the keeper in the second half inside the danger area. He beat the Three Star keeper Alan Neupane, but could not score. Top Bista got another chance near the Three Star post, but his header was not in the frame of the goal.

Three Star also got chances to add to its goals, but missed several. Martin got a chance, but his shot was wide off the target, while shots from Buddha Chemjong and Sunil Bal were missed. Nirajan Khadka could not convert a brilliant pass from Martins. Three Star got a free kick just outside the box when Rajan Gurung fouled Chemjong, but Khadka’s kick could not find the right direction. With the win, Three Star will now take on Laxmi Hyundai Manang Marshyangdi in the final on Monday who beat the other departmental team Tribhuvan Army Club 1-0 in the first semifinal on Friday.

CIAA files case against x-IRD chief Sharma, two others for revenue leakage worth over Rs 1 billion
19 hours ago