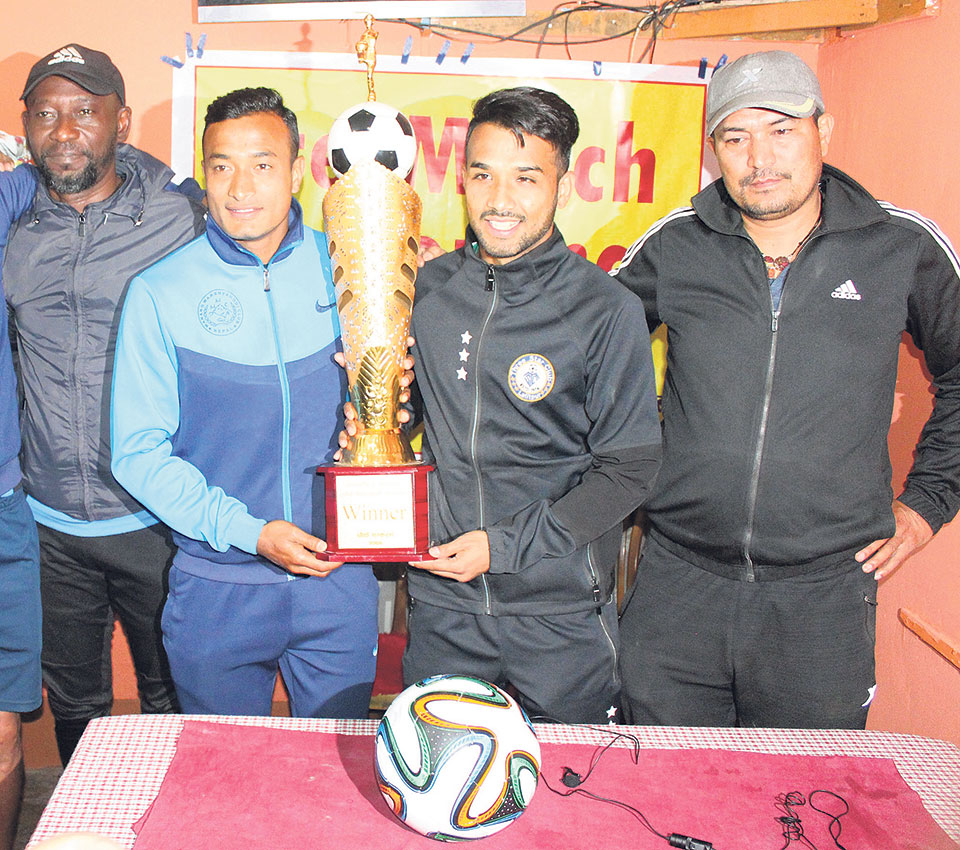 ILAM, April 30: Laxmi Hyundai Manang Marshyangdi Club and Ruslan Three Star Club are going head-to-head in the final of the ongoing fourth International Invitational Tuborg Mai Valley Gold Cup football tournament on Monday. Both the teams will be going into the match with full preparations to lift the title of the biggest prize money of the eastern hilly region.

Both the teams, who comprises from the captain of the national team to the international players, have claimed that they will lift the title. Speaking at a pre-match conference organized in Ilam on Sunday, the head coaches of both the sides said that they know their opponents quite clearly and will win the title. They added that they have already made strategies to win the title displaying brilliant performance in the final.

Manang head coach Fuja Tope does not think that the match against Three Star will be an equal battle. He claimed that they have the best players and the team is properly trained to win the title.  “Three Star is a very good team as well, but we will perform very well in the final rectifying all our previous errors,’’ Tope said. In a bid to make the last five meetings with Manang successful, Three Star will most likely field captain Nirajan Khadka along with national team striker Bimal Gharti Magar, Rejin Dhimal, Alan Neupane, Sunil Bal, Ananta Tamang and Bijay Dhimal.

Three Star head coach Megh Raj KC said that the probability of any team in any tournament before the final is always 50-50. “The chance of winning for any team in always equal, but we have made a plan to perform brilliantly and win the title,’’ KC said. “Our strategy is to face the opponent from the first whistle to the last and get the win.’’

“There won’t be any weakness from our side in the final and the crowd will get to watch a game of high-standard,’’ he added. “The Nepali crowd knows that the match between Three Star and Manang is like a match between Real Madrid and Barcelona.’’  Three Star and Manang faced each other five times last season and the former beat Manang in all its meetings. Three Star beat Manang 2-1 in the semifinals of the Tilottama Gold Cup, 2-0 in the final of the Manmohan Gold Cup and 1-0 in the summit clash of the Madan Bhandari Memorial Gold Cup. Also, Three Star had defeated Manang in the Hetauda Gold Cup and 2-0 in the semifinals of the Simara Gold Cup.

The winner of the tournament will take home Rs 666,000, while the runner-up will be rewarded with Rs 400,000. The best player of the tournament will get a Yamaha 150 CC motorcycle, while the organizers had informed that the man-of-the-match and every game will get Rs 10,000. The organizers had also informed that the best goalkeeper, the best defender, the highest goal scorer and the emerging talent will also be prized.

Electoral alliance a must to safeguard democratic values: Minister Shrestha
36 minutes ago