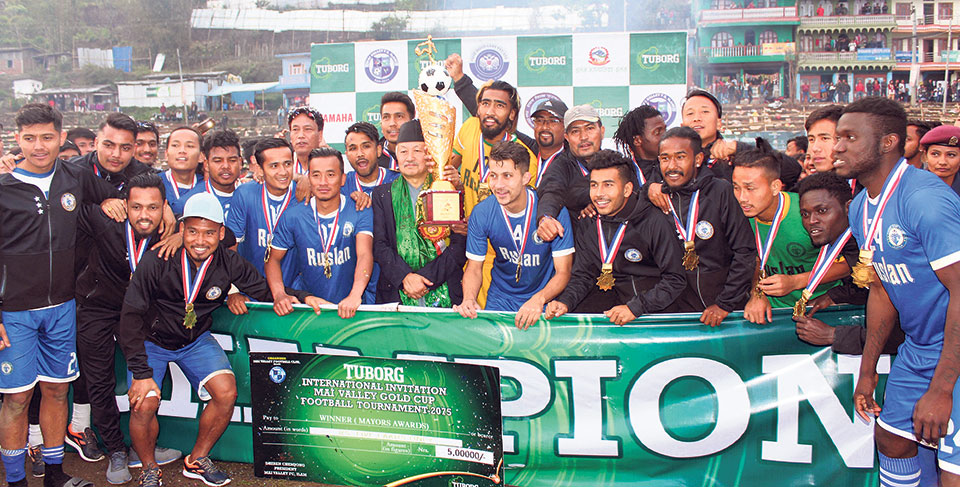 The match was pushed into extra time and an additional 15 minutes were added. Sunil Bal scored for Three Star converting a pass after national team striker Bimal Gharti Magar dribbled beautifully near the danger box to give Three Star the win.

With the win, Three Star took home Rs 666,000, while the runner-up Manang was rewarded with Rs 400,000. Three Star has been successful to become the first team to win a trophy this season. Three Star had also beaten Manang five times last season. Meanwhile, Manang’s Heman Gurung was named the man-of-the-match in the final.

Both the teams got plenty of good chances to score in the match. Manang’s Gurung got a good chance near the post, but his shot was out of the frame of the goal, while captain Biraj Maharjan, Sujal Shrestha and African player Victor missed glorious opportunities to score.

Three Star’s Martin could not convert a chance after a pass from Magar, while Manang keeper Bishal Shrestha saved an initial shot from Deepak Rai and the follow up was missed by Rai again. Magar’s shot from near the box was brilliantly saved by keeper Shrestha, while Bal and Magar missed important chances as it was over the frame of the goal.

Manang skipper Maharjan was named the man-of-the-series and was rewarded with a scooter. Three Star’s Alan Neupane, African player Peter, Bal, Martin and Megh Raj KC won the best goalkeeper, the best defender, the best midfielder, the best forward and the best coach awards respectively. Likewise, Nabin lama, Rejin Subba, Manish Thapa and Yuvraj Khadka became the joint top scorers of the tournament with two goals each, while Mai Valley’s Darshan Gurung was declared the emerging player of the tournament.

The best players and the best coach were prized with Rs 15,000 each, while all the top goal scorers bagged Rs 25,000 each.

The tournament, which was started from April 19, also provided Rs 10,000 to all the man-of-the-match award winners.

The departmental team Tribhuvan Army Club had won the first edition, while Jhapa XI had lifted the second and the third editions of the tournament.