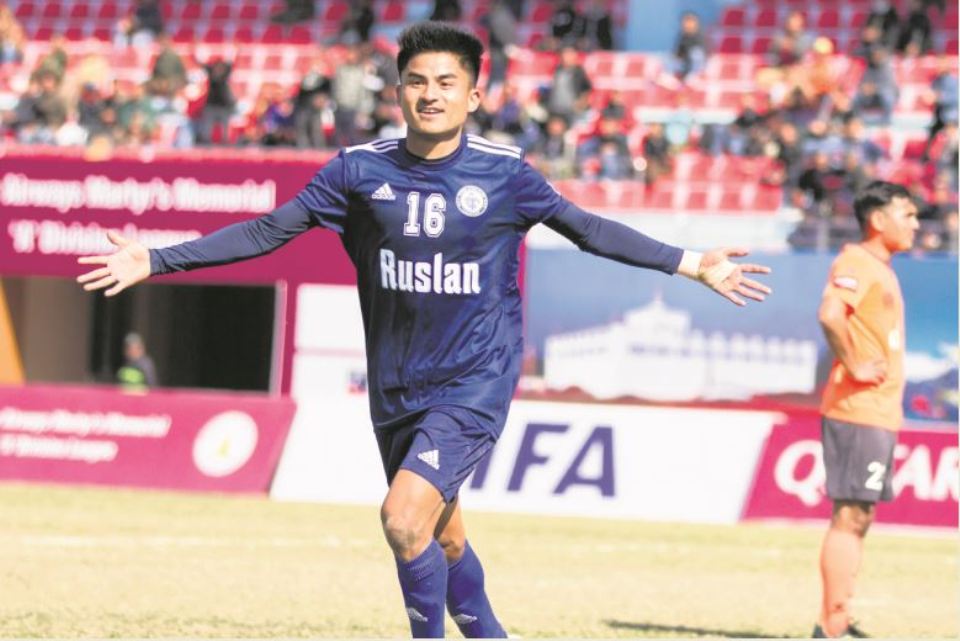 Three Star now has won four matches this season and is one ahead of its rival Manang Marshyangdi Club, who still has a game in hand, but got three clear of the other departmental team Nepal Police Club, who surrendered to a 1-0 loss to Machhindra on Wednesday.

Likewise, high-flying Jawalakhel has three wins, and got back to the winning ways after three winless results. It drew 0-0 against the New Road Team and lost 1-0 and 2-0 respectively to Machhindra and Police.

At the Dasharath Stadium in Tripureshwar, Himalayan Sherpa nearly got back in the game after equalizing 1-1 in the injury time, but failed to protect its equalizer and conceded two more goals to lose the game 1-3.

It was Himalayan Sherpa’s third loss of the season. It has only registered one win and is lingering in the 11th place, with 12th-placed Chyasal Youth Club having a game in hand.

Both the teams could not get settled in the first five minutes of the match, but Three Star kept getting chances from set-pieces.

Nishan Khadka hit a free-kick in the second minute of the match, but his shot on target was punched away to safety by Himalayan Sherpa goalkeeper Kishor Giri.

Sherpa played a physical game and conceded a couple of free-kicks before Sushil Rai gave Three Star the lead.

Lal Rammawia, who scored a brace to hold Manang to a 2-2 draw in the last round, produced a delightful chip to Sushil, who scored from inside the box in the sixth minute to draw the first blood.

Three Star was pegged back with an equalizer in the second minute of the injury time, but with good counter attacking football, it scored again.

Three Star nearly added its second goal in the 12th minute as Ananta Tamang got a good ball from a free-kick chance inside the box, but Giri was quick to come off his line and push the ball away for a corner in the 11th minute.

Rammawia got a chance again, but header from the center of the box was off target a minute later.

The winning team kept on knocking the opponent’s door, but Giri kept on saving.

Wasiu Oladiran Hazmat got a chance to score in the 30th minute, but his header from inside the box after a good pass from Khadka was saved again by keeper Giri.

Sherpa punished Three Star for its missed chances in the first half with a good goal in the second injury time minute.

Stephane Samir stood up to take a free-kick, and his right footed shot was into the top left corner for an equalizer.

But, the team could not protect its equalizer and got behind again. Sanjog Rai got a chance inside the box, and he produced a right footed shot beating the keeper in second bar to restore Three Star’s parity as soon as the first half was about to come to an end.

Three Star doubled its lead again just five minutes into the second half as Khadka produced a very good pass to beat the entire Sherpa defense, and Hazmat finished coolly rounding off the keeper.

Three Star was totally dominating in the period and held on to its lead, and eventually won as Sherpa could not score further.

With the result, Three Star has climbed third and above Manang on 14 points. It has four wins, two draws and two losses. Likewise, Sherpa is in the 11th place with seven points from a win, four draws and three losses.

In the other game, a late second half goal from Fode Fofana ensured Jawalakhel’s victory over APF as the African produced a superb one touch goal to win the match.

Despite the Jawalkahel dominance, APF got enough chances to score, but its 13 shots were in vain as it has failed to score in four matches now losing five out of eight.

With the result, Jawalakhel is in the 12th place, just one behind Manang and two behind Three Star, and has 12 points with three wins, three draws and two losses.

Likewise, APF is second from bottom with five points after a win, two draws and five losses.