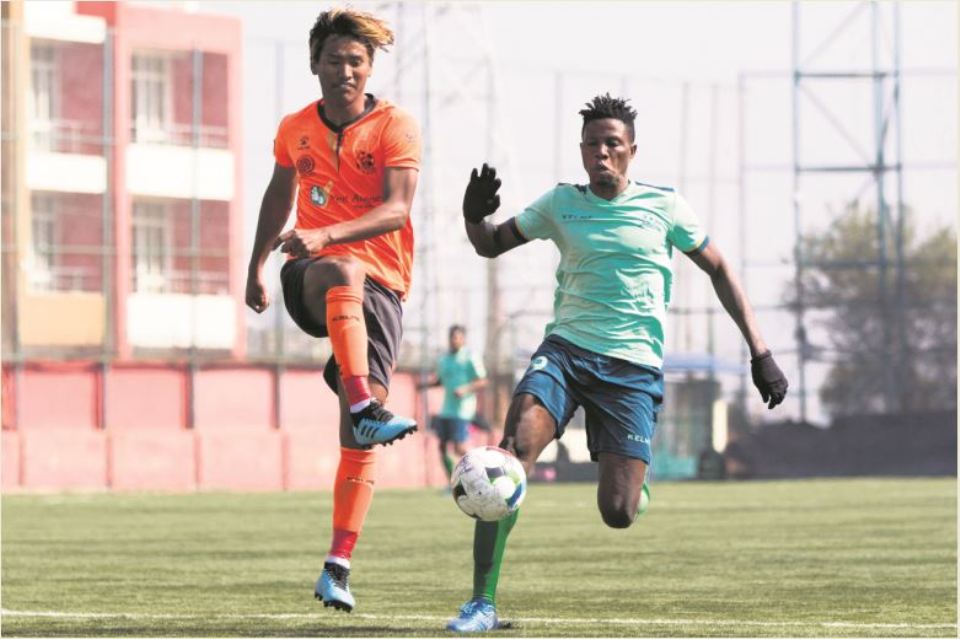 KATHMANDU, Jan 29: Tribhuvan Army Club shot its way to the top of the table after a slender 1-0 win over Jawalakhel Youth Club, while Saraswati Youth Club registered its first win of the season beating Himalayan Sherpa Club in a 4-3 thriller in the ongoing Martyr’s Memorial A-Division League in Lalitpur on Tuesday.

In the second match of the day at the All Nepal Football Association (ANFA) Complex in Satdobato, captain Bharat Khawash scored his third goal of the season as his second-half strike was enough to seal a 1-0 win over Jawalakhel, who faced its third defeat in its last four league games.

Both the teams were equally good in attack in the game as they both took plenty of shots, but Army was the dominating team with most of the ball possession, and also scored a goal to stun a strong looking Jawalakhel side.

Army looked the more threatening side in the opening minutes as Tanka Bahadur Basnet crossed the ball inside the box in the 12th minute, but a right-footed shot from Nawayug Shrestha whiskered wide of the target.

Jawalakhel got a chance two minutes later as a shot from Suraj Jeu Thakuri was just fingertip saved by the Army goalkeeper Bikesh Kuthu.

Army nearly was awarded with an own goal, but a shot from Adama Doumbia destined to go inside his own post was brilliantly saved by Jawalakhel goalkeeper Arun Blon in the 15th minute. Blon produced another save four minutes later as he punched away a Basnet cross.

Army’s Shrestha tried a shot from outside the box, but it was brilliantly saved by Blon again in the 40th minute.

Shrestha produced a good chance just two minutes into the second half as he dribbled past two Jawalakhel defenders, but his shot went wide.

Jawalakhel got a free-kick chance in the 51st minute as Rup Bahadur Lama went for a shot, but it was way off target, while Army’s Basnet’s shot from outside the box was caught by Blon a minute later.  Junior Wamba got two chances in the space of two minutes as the first shot was saved by keeper Kuthu in the 58th minute, while the second one was poor and was caught well by Kuthu with ease.

Jawalakhel’s Lama got another chance to score from a far distance as his good fierce hit was brilliantly saved by Kuthu again as he dived to the right to send the ball to the corner in the 66th minute.

Jawalakhel got two good chances before Khawash stunned the side as Simant Thapa’s shot went just over the crossbar in the 71st minute, while a shot from Thakuri was saved by Kuthu two minutes later.

Khawas then scored the decisive goal for Army as his shot from a difficult angle from the right wing in the 75th minute was enough for Army to seal the win.

With the result, Army has restored its advantage at the top of the table with 20 points with six wins, two draws and a loss, while Jawalakhel is in seventh with 12 points including three wins, three draws and three losses. Army is a point ahead of Machhindra, while it is four points ahead of Manang Marshyangdi Club, who has a game in hand.

In the early kick-off, Saraswati produced a stunning goal scoring performance, but could not solve its incompetence at the back as it scored four, but conceded three to win its first league game of the season.

Busari scored his first goal of the game in the fifth minute as he headed in a cross in the center of the box from Purna Bahadur Shrestha to give Saraswati the lead.

Himalayan Sherpa equalized in the 12th minute as Ashish Gurung headed the ball inside the box to pull the game back in track.

Busari was again involved in the goal as his pass put Binod KC through inside the box, and he converted the chance easily to restore the lead in the 35th minute.

However, the problem at the back was clear again as Himalayan Sherpa exploited the defensive problems to equalize for the second time in the first half.

Bijay Shrestha’s right-footed shot from a long distance hit the net just at the stroke of half time.

Busari scored his brace in the 83rd minute to take a 3-2 lead as he headed in a corner from the center of the box, while Manish Thapa scored a solo goal in the 88th minute to double Saraswati’s advantage for the first time in the game.  Saraswati looked destined to win 4-2, but Rabi Thapa Magar scored a brilliant free-kick in the third minute of the injury time to make the score 4-3.

With the win, Saraswati has four points with a win, a draw and seven losses, but sits at the bottom. Likewise, Himalayan Sherpa is third from the bottom with seven points after a win, four draws and four losses and has seven points. Saraswati is now just a point behind Armed Police Force (APF) Club.

KATHMANDU, Jan 26: Leader Tribhuvan Army Club could not put its inconsistency aside as it failed to go three points... Read More...