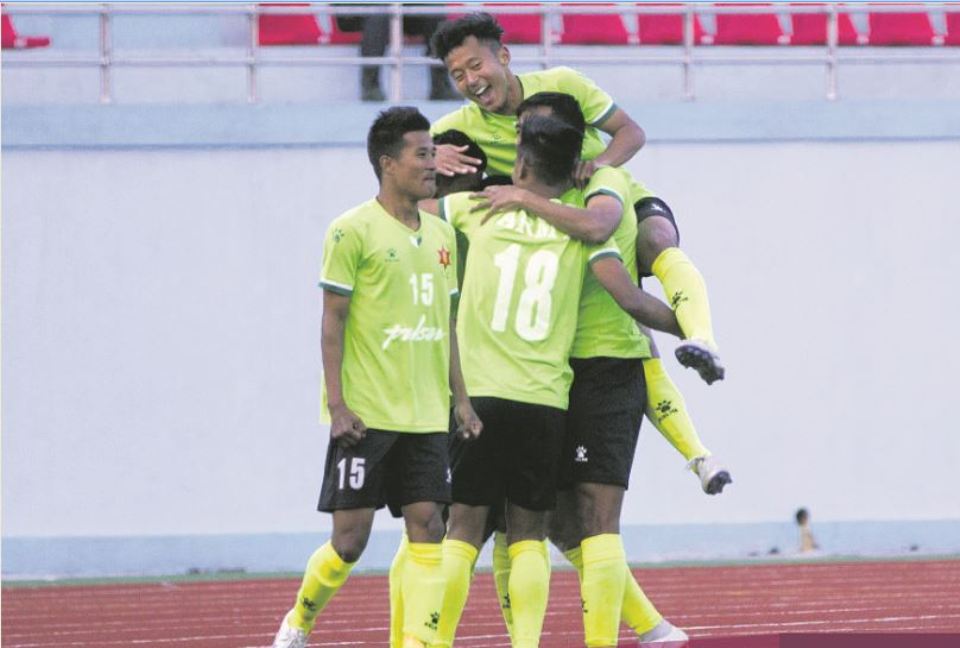 KATHMANDU, Jan 21: A sensational second half performance helped the departmental team Tribhuvan Army Club to go three points clear at the top of the table with a 3-0 win over Chyasal Youth Club in the ongoing Martyr’s Memorial A-Division League in Kathmandu on Monday.

Captain Bharat Khawas, Nawayug Shrestha and Santosh Tamang scored the goals for the team to register a comfortable win over Chyasal, who has not won a single game after defeating Sankata Club in the first round.

Chyasal dominated the early part of the first half with two good chances inside the first seven minutes.

The league centurion Santosh Shahukhala got a good chance in the seventh minute as he hit a shot from inside the box, but Army keeper Bikesh Kuthu produced a good save.

Army started creating chances come the 10th minute mark of the game as the four forwards were quick in attack. The 4-2-4 formation worked really well with pivot roles from midfielders Santosh and Sesehang Angdembe, who fed the ball to the forwards Khawas, Shrestha, George Prince Karki and Dinesh Henjan. Karki’s shot from a free-kick was wide in the 10th minute.

Shrestha was so close to giving Army the lead in the 24th minute but his header was saved by Chyasal keeper Alan Neupane, while the rebound shot from captain Khawas was blocked by the defenders.

The first half did not really produce any other good chances as Army was not properly settled in the match and all Chyasal did was hit the leader on the counters. Shahukhala was disappointing yet again as he could not score in the chance he got and the midfielders were not really up for the game with poor passing displays.

Both the teams switched to attacking mode in the second half, but Chyasal got the better of two early on but could not convert the chances into goals.

Hemant Thapa Magar hit a shot in the 47th minute, but the ball went wide, while another shot two minutes later grazed over the crossbar.

Captain Khawas got close to scoring in the 49th minute as he produced a good piece of individual skill to beat the Chyasal defense, but failed to hit a good shot.

Chyasal began to apply pressure in the second half as a shot was brilliantly saved by Kuthu in the 52nd minute and was pushed for a corner. Shahukhala got a chance after that, but his shot was way off the target.

Army finally broke the deadlock in the 58th minute as Khawas scored his second goal of the season with a brilliant finish from inside the box on the right corner.

Shrestha doubled the Army lead and scored his fourth goal of the season as he converted an Angdembe pass in a counter attack superbly in the 73rd minute to pile up the pressure on Chyasal.

It was all Army after that with constant attacking threats and good counters. Santosh got a good chance in the 75th minute from a free-kick, but his shot grazed over the crossbar.

Shrestha nearly scored his brace in the 80th minute, but his shot on goal was brilliantly saved by Chyasal keeper Neupane.

It went from bad to worse for Chyasal as Tshiring Gurung was yellow carded for a foul inside the box. Tamang brilliantly converted the penalty despite Neupane getting a touch of the ball in the 85th minute and the game was all over.

Army got the second chance from the spot in the third minute of the injury time as Gurung fouled an Army player inside the box again. Shrestha hit the spot-kick, but the ball hit the woodwork.

With the win, Army is now on top of the table with 16 points from seven matches which includes five wins, a draw and a loss. Likewise, Chyasal is struggling as it stays third from bottom with six points. The team has won one, drawn three and lost three matches so far.

In the other match played earlier on the same day, Brigade Boys Club held an overpowered Sankata Club to a 0-0 stalemate as the latter could not score after a remarkable 21 shots.

Sankata got the better chances of the two, but was very poor in the final third and gave away the possession a lot of times, which Brigade could not capitalize.

It was Sankata’s third draw of the season and only the second match it has failed to score a single goal this season after it was defeated 2-0 by Chyasal.

With the result, Sankata is in the seventh place with nine points which consists of two wins, three draws and two losses. Likewise, Brigade is ninth with eight points including two wins, two draws and three losses.