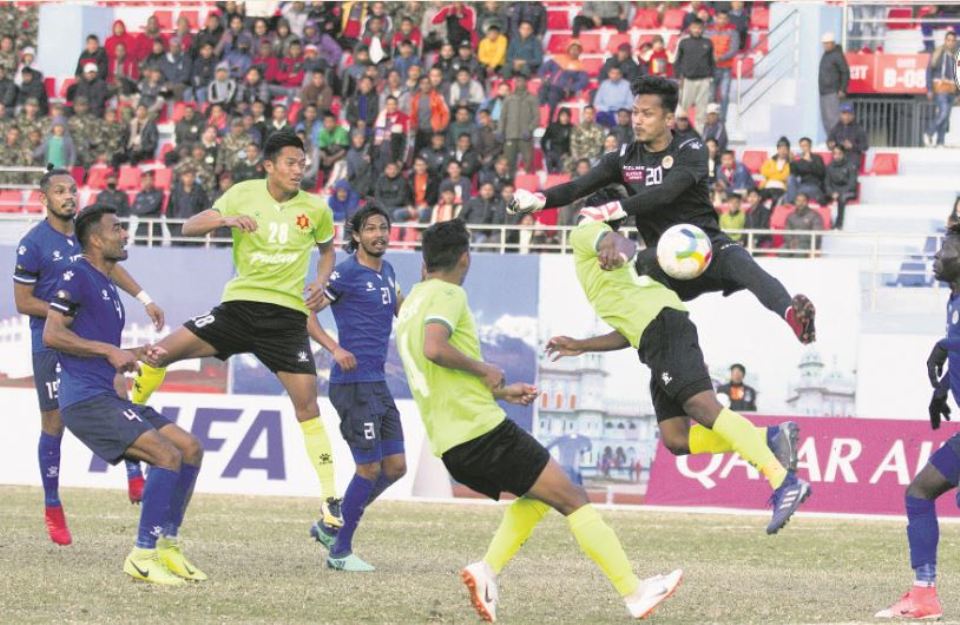 KATHMANDU, Jan 15: 10-man Tribhuvan Army Club rued chances to go two points clear of Machhindra Club as it was held to a 1-1 draw against Sankata Club in the ongoing Qatar Airways Martyr’s Memorial A-Division League in Kathmandu on Tuesday.

In the last match of the sixth round played at the Dasharath Stadium, Sankata cancelled out a first half strike from Army’s Nawayug Shrestha to stop the thriving departmental team for a draw.

Despite dominating throughout the game, Army could not get its finishing boots on for the game and missed a lot of chances to add to its tally in the second half.

Army won a lot of free-kicks at the start of the first half, but could not get the finishing right as Sankata defended superbly to deny tall Army players and got the ball to relative safety.

However, Sankata got a good chance in the 18th minute of the match after a defensive lapse of concentration from Army, but Massouke Ltiegnie Oloumou Pierre Gean Marie could not capitalize on the opportunity.

Earlier, in the 10th minute, Sankata hit a good free-kick, but Army got away with a good save from keeper Bikesh Kuthu.

Army switched its gear to attack in the 23rd minute as Dinesh Henjan crossed the ball inside the box, but Sankata keeper Binaya Shrestha caught the ball and did not let forward George Prince Karki get anywhere near to it.

It was Army who took the lead in the 29th minute as Nawayug Shrestha bagged his third goal of the season producing a brilliant header from inside the box from a Henjan cross.

The departmental team cruised into the game with a brilliant attacking mindset, and controlled the tempo superbly allowing Sankata will little to no chance with clinical passing football. It utilized the flanks with Henjan playing the prime playmaking game, but a short of finishing from Army forwards cost it the extra two points.

Santosh Tamang had a chance to double the lead in the 34th minute, but his shot from outside the box sailed over the bar.

If his attacking chance was a lot to talk about, Tamang’s defensive brilliance was much better. Sankata got a clear-cut chance to equalize in the 38th minute, but Tamang made a goal-line clearance to deny Sankata from scoring.  Sankata got another chance in the 39th minute as Amit Tamang hit a shot from inside the box, but Kuthu saved it again.

Army’s Tek Bahadur Budathoki hit a shot in the first minute of the first half injury time, but it was saved by keeper Shrestha.

The departmental team got chances after chances as Santosh got a shot, but was blocked by the Sankata defense. The rebound shot from Sesehang Angdembe went wide in the fifth minute of the first half injury time.

Sankata started the second half better, but Army’s Henjan hit a powerful shot from outside the box which went wide in the 48th minute.

Youddha Shahi of Army was shown the red card after facing two yellows in the 10th and the 52nd minutes.

It went bad to worse for Army as it conceded a penalty two minutes later as Suman Aryal was adjudged to have controlled the ball with his hand.

Amit stepped up to take the spot kick and placed the ball perfectly in the right corner to equalize the game in the 54th minute.

Both the teams got chances after that, but failed to score. Sankata got the better of the two after Army went down to 10 men, but was left frustrated in the final third with the lack of finishing.

With the result, Army is in the second place on goal difference with 13 points with four wins, a draw and a loss, while Sankata is eighth with eight points with two wins, two draws and two losses.

Machhindra is at the top with 13 points from four wins and two draws, while Manang Marshyangdi

Club and Three Star are third and fourth with 12 and 10 points respectively.  Machhindra has one point deducted this season due to finishing second from bottom last season.

The seventh round of the league matches will start from Friday.

KATHMANDU, Jan 23: A second-half strike from Ranjit Dhimal sealed a crucial 1-0 win for Machhindra Club against the departmental... Read More...