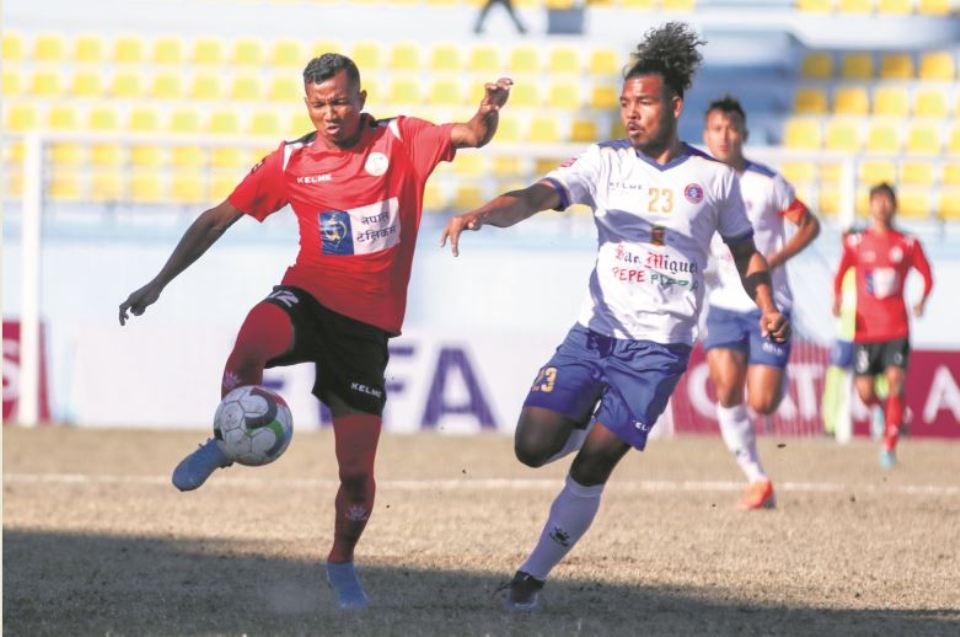 KATHMANDU, Jan 23: A second-half strike from Ranjit Dhimal sealed a crucial 1-0 win for Machhindra Club against the departmental team Nepal Police Club to go level on points with leader Tribhuvan Army Club in the ongoing Martyr’s Memorial A-Division League in Kathmandu on Wednesday.

Machhindra, which has now won five matches in eight games, started with attacking note prioritizing the flanks and with good passage of passing football. Meanwhile, Police started well, but started being pegged back by the high press of Machhindra and could not create more.

At the Dasharath Stadium in Tripureshwar, Police created chances early on in the game, but could not capitalize it and Macchindra constantly threatened with good attacking displays to pressurize Police.

Machhindra got a chance in the 11th minute as Dhimal fed a good through ball inside the box, but none of the forwards could get a good finish at the end of it.

Machhindra’s Sujal Shrestha hit a shot in the 20th minute from a long distance, but the effort went way over the bar. Rijal was very near to getting the first blood in the game, but his header was just off target in the 28th minute.

Police’s Rai wasted a good opportunity to score in the 41st minute as his shot was off target outside the box, while Hem Tamang’s shot from inside the danger area was gathered by keeper Shrestha three minutes later.

Machhindra overcame the struggle it had to make in the end period of the first half and quickly got into attacking gear by constant attacking pressure and high press football. The wings were brilliantly utilized to exploit the departmental side’s fragile midfield and got the goal it deserved.

Before the goal, Machhindra’s Buddha Raj Limbu hit a shot, but the ball was easily saved by Police keeper Shatrudhan Kumar Chaudhary in the 46th minute.

Rijal got another shot, but his goalless spree continued as his shot missed the target in the 50th minute, while Dhimal’s shot from distance flew over the crossbar two minutes later.

Machhindra got a chance from a free-kick in the 53rd minute and Dhimal stood up to take the set-piece. His shot went straight inside the net from the right wing position as the team cruised towards a crucial victory.

Rijal got another chance to score his first goal, but his shot from inside the box in the 55th minute was well off target.

Machhindra then began to absorb the Police pressure by going deep and allowing spaces to the team to hit the departmental team on counter attack. Police was frustrated with the low blocks of Machhindra defense and struggled to hold on to the ball and never really looked like threatening it despite getting loads of chances.

Police was awarded a free-kick as Sujal was adjudged to have controlled the ball with his hand in the 70th minute. Rai’s freekick was brilliantly saved by Machhindra keeper Shrestha.

Police’s Bhola Nath Silwal, who came in for Hem Tamang in the 66th minute, got a chance through a free-kick in the 75th minute from only a few yards out, but the shot was punched away to safety by the keeper again.

It got a lot of free-kick chances in the game as Nir Kumar Rai’s shot went over the crossbar three minutes later.

Both the teams could not score any goal during the remaining period and Machhindra won the game with the narrowest margin of 1-0.

With the win, Machhindra has equaled the points with Army on 16, but is still second on goal difference. It has won five games, drawn twice and lost one.

Machhindra is three points clear of holder Manang Marshyagdi Club and five clear of both Police and Three Star Club. Both Three Star and Manang have a game in hand.

Likewise, Police is in the sixth place with 11 points after three wins, two draws and three losses.

KATHMANDU, Jan 26: Leader Tribhuvan Army Club could not put its inconsistency aside as it failed to go three points... Read More...