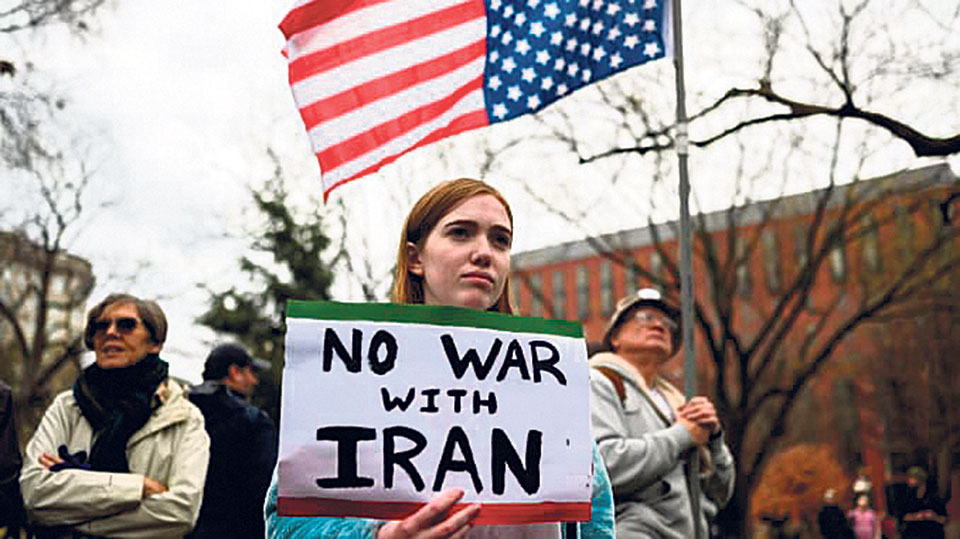 It is time for all the UN members, including Nepal, to hold the UN Security Council accountable for its inability to reduce nuclear warheads

Iran has announced that it is withdrawing from the 2015 Iran Nuclear Deal. Pulling out of the deal that was constraining its uranium enrichment is a clear sign that Iran is considering acquiring a nuclear weapon. This is a major blow to the nonviolent efforts initiated by the Obama administration to bring Iran’s nuclear-arms pursuit to its end. The assassination of Iran’s top military leader, General Qassem Soleimani, essentially has put the countries on a volatile space. The rocky relations between the US and Iran since Donald Trump unilaterally pulled out of the nuclear deal in May 2018, followed by the crippling economic sanctions imposed on Iran in November 2018, have entered its new low.  Iran has hit back the Iraqi air bases, where American troops are stationed, with ballistic missiles. The conflict has escalated and is getting out of control.

Nuclear pursuit
This escalating conflict has a backdrop. Iran began its nuclear pursuit in the 1960s when it was being ruled by the Shah regime. But the revolution in Iran toppled the Shah dynasty in 1979, and the nuclear chase came to a halt. Iran again started the enrichment of uranium but suspended the program in 2003 to avoid international sanctions. Iran had to open its door for inspection by the International Atomic Energy Association (IAEA), just to prove that the program was within the limitations of the Non-Proliferation Treaty. As the signatory of IAEA, Iran has the right to enrich uranium for other than military purpose but remaining under the inspection of IAEA. In January, 2006, Iran again openly announced that it would start uranium enrichment, citing the right to do so under Non- Proliferation Treaty. Despite the request of IAEA to halt the program, and tough sanctions from the world powers, it kept on moving, dragging every state playing the diplomacy card. Given the history, the West inferred that Iran was going for a nuclear bomb.

But then things changed in America. Barack Obama came to power and used the diplomatic chops of his administration to secure a Joint Comprehensive Plan of Action (JCPOA), known as The Iran Nuclear Deal with Teheran. Iran abided by the rules set by JCPOA even though Trump administration walked out of the deal one and a half years back. Iran is now lifting restrictions it agreed in 2015 with P5 +1—the five UN Security Council’s permanent members and Germany— as announced on January 5.

Well, Iran nuclear deal had limitations. It might not have been the perfect deal. But Iran, under this deal, had agreed to implement the IAEA inspection, which basically allowed inspectors to access any site anywhere in Iran. That would have stopped Iran from acquiring a nuclear bomb at least for another decade. A decade long of economic cooperation with the West could have been an opportunity to convince Iran that it does not necessarily need a nuclear weapon to continue its prosperity. The opportunity to continue to build a trustful relation impacted immensely after the American withdrawal. Iranian withdrawal in essence has thrown the agreement off the cliff.

Big picture
Iran nuclear debate is incomplete without talking about the whole picture of the nuclear world. There are altogether nine nations with nuclear power in the world. India, Pakistan, and North Korea have openly tested their nuclear weapons and added themselves on the nuclear power list in the last five decades. Israel has neither confirmed nor denied but is widely believed to be carrying the nuclear warheads. These nations, which acquired nuclear weapons after the NPT implementation, have not signed the Non-proliferation Treaty. North Korea had signed, but withdrew and became a nuclear power. Those with nuclear power, and are in the Security Council as permanent five, seem to care less about their responsibility to the non- proliferation treaty in practice. For them the treaty is all about keeping an eye on others, so that others would not gain what makes them supreme. The United States and Russia have the most warheads, therefore the most responsibility to keep the world safe. But Putin and Trump have only made the environment of nuclear race worse.

If we see the trend, the nations with a sense of high security threats are heading toward nuclear weapons. The threats do not have to be real—the mere perception of a threat is enough. For instance, India assumed that it had security threats from China and Pakistan based on the conflicts it had with them. Pakistan never trusted India and developed a nuclear program presenting the same excuse. North Korea was skeptical about the United States and now Iran is citing the same justifications. The presence of Israel and the poor relation it had with it was enough a threat for Iran to defend the need for a nuclear program. And after the Iraq war, especially when no weapons of mass destruction were discovered, it has reasons not to trust the United States. Thus, it would not be erroneous to say that lack of trust is the real reason behind the nuclear race. The trump administration with its fiery rhetoric has only exacerbated the mistrust.

The world has surely turned into a global village, but the one where the members fail to trust each other, just like an unsecured village where families are relying more on guns for their protection than the state system. United Nations is often considered a body full of possibility but failing to execute its anticipated responsibility. It really turned into a playground of permanent five during the Iraq war. Nuclear deterrence in a way has provided nations with unlimited powers over those which do not. In this context, America is literally cornering Iran, and Iran might interpret nuclear power as a key to keep “the bullying nations away,” and provide recognition in the region and in the world as a real power. It would not be a far-fetched idea to say that these realities will push Iran further into nuclear pursuit.

Who wants war?
But who wants war—except the war hawks of Washington and Tehran? All the Democratic 2020 candidates are against it. Americans are tired of wars. There are other domestic issues like health care and international issues like Global Warming that Americans in general want to spend their time and resources on. The recent poll conducted by the University of Maryland shows that only 42 percent Americans approve Trump’s Iran policy. The majority of Americans blame Trump administration for heightened tensions with Iran and disapprove of Trump’s Middle East policy. As a student of Conflict Resolution, I personally see Trump’s Iran policy flawed. His administration basically has not only thrown cold water on the progress made by the Obama administration but has unnecessarily entangled itself into the Saudi-led war on Yemen. The Netanyahu government has played the Trump administration to the extent that America’s ability to perceive Middle East independently has been seriously compromised. The possibility of curbing the nuclear ambitions of Iran peacefully has been in grave danger.

Four thousand additional American soldiers have been deployed to the Middle East after the conflict spiraled out of control. Iraqi parliament has passed a resolution, even though non-binding, calling American soldiers to leave Iraq. It is a huge diplomatic blow to the Trump administration. But Instead of trying to win Iraq’s support, Trump is threatening it with sanctions. Trump administration might be overplaying the military card in the Middle East. What he might have not considered is a military action from the United States, similar to that during the Iraq war, is impossible. It would be too expensive and might invite more hostility towards the United States in the Middle East. Iran has already experienced the impact of sanctions that is upsetting the banking systems and its people, which in the long run might create a generation which is anti-American and pro nuclear program.

Of course, there are serious issues with Iran. That is why the world powers came together to carve a nuclear deal that was balanced with carrots and sticks. Trump not only dismantled it but failed to provide an alternative of engaging Iran diplomatically. Instead, he keeps on threatening Iran in Twitter. His recent threat of targeting 52 targets, including the cultural sites of Iran, is likely pushing the conflict into a spiral. As an American citizen, I am deeply concerned by his behavior and am ashamed to call him my President.

Barack Obama prioritized the “carrot.” The Trump administration did not only pull the carrot out from the Iran equation, but substituted it with a stick. And now, the unpredictable president has been whipping it like diplomacy does not need to exist. There is a growing concern in the US that an impeached president like Trump can go to any extent on Iran to distract Americans from impeachment. To some extent the concern is valid. Trump might have underestimated this issue and might be pushing Americans into harm’s way for his political survival. All the lives lost in Iraq and Afghanistan should have taught him something, you would think.

The race to nuclear proliferation is dangerous. It is time for the world to realize the danger of nuclear mishap and promote non-proliferation in good faith. But it is also time for all the UN members, including Nepal, to hold the UN Security Council accountable for its inability to reduce nuclear warheads and apply moral pressure on those nations which are not abiding by the non-proliferation agreements. Leaders lead by example. Bullying a non-nuclear power by a nuclear power will only help the former justify the need of a nuclear weapon, pushing proliferation and making the world unsafe for all. The challenge here is not just to stop Iran from acquiring a nuclear weapon, but to assure the rest that they are better off without it.

WASHINGTON DC, Oct 10: With US envoy to the UN Nikki Haley set to depart by year’s end, speculation is... Read More...

Construction of transmission line connecting China in limbo
3 minutes ago

Role of Jyapu community in development of agricultural economy is important: PM Deuba
33 minutes ago