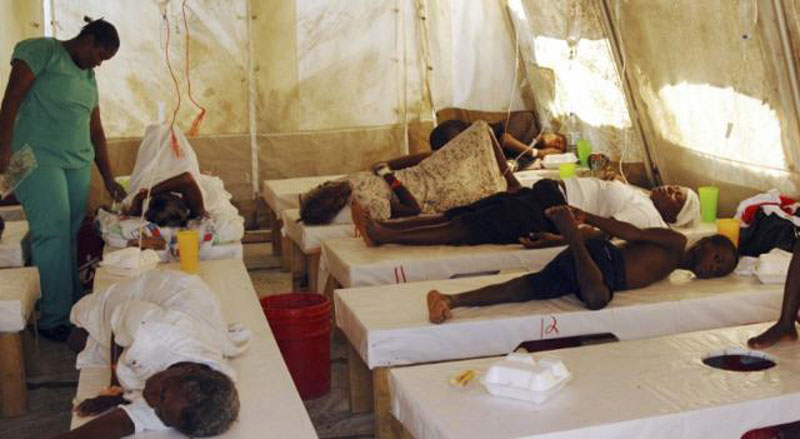 Outgoing United Nations Secretary-General Ban Ki-moon apologized to the people of Haiti on Thursday for the world body's role in a deadly cholera outbreak that has killed more than 9,300 people and was blamed on Nepali U.N. peacekeepers.

Haiti was free of cholera until 2010, when the peacekeepers dumped infected sewage into a river. The United Nations does not accept legal responsibility for the outbreak of the disease that causes uncontrollable diarrhea and has sickened 800,000 people.

But for the first time, Ban said sorry.

"The United Nations deeply regrets the loss of life and suffering caused by the cholera outbreak," Ban told the 193-member U.N. General Assembly in Creole, French and English. "We apologize to the Haitian people."

"We simply did not do enough with regard to the cholera outbreak and its spread in Haiti. We are profoundly sorry for our role," said Ban, who steps down at the end of 2016 after two five-year terms.

While Ban acknowledged that the outbreak was "a blemish on the reputation of U.N. peacekeeping," he did not specifically say that U.N. troops were responsible for bringing the water-borne disease to Haiti.

An independent panel appointed by Ban issued a 2011 report that did not determine conclusively how cholera was introduced to Haiti. However, in 2013 the panel members independently published an article that concluded personnel associated with the U.N. peacekeeping mission were "the most likely source."

"As a father and grandfather, I felt tremendous heartache at the pain so many families have had to endure. I will never forget it," Ban said on Thursday of a visit to Haiti.

A U.S. federal appeals court upheld the United Nations' immunity in August after a lawsuit was filed in the United States on behalf of cholera victims.

Deputy U.N. Secretary-General Jan Eliasson told reporters on Thursday that the court decision had allowed Ban to apologize before the end of his term. On Thursday Ban also outlined a new approach to try and wipe out cholera in the Caribbean country.

The United Nations hopes to raise $200 million for families and communities worst-affected by the disease outbreak.

Ban described it as "a concrete expression of the regret of our organization for the suffering," proposing that material assistance and support be based on priorities established in consultation with communities, victims and their families.

U.N. special advisor David Nabarro said in October that raising those funds through donations would be "highly unlikely." The General Assembly could instead be asked to add the cost to the U.N. budget, which is paid through assessed contributions.

"Without your political will and financial support, we have only good intentions and words," Ban told the General Assembly.

A further $200 million would be raised to fund rapid response teams and build water and sanitation systems in a country where only a quarter of Haitians have toilets and half have access to clean drinking water.

Nabarro noted on Thursday that the cholera in Haiti had spread to the Dominican Republic and Jamaica, but those countries had been able to wipe it out.

JAJARKOT, May 16: As per the latest updates of vote counting in the district, Nepali Congress and CPN-UML have won... Read More...