UN chief in Somalia on emergency visit to focus on famine 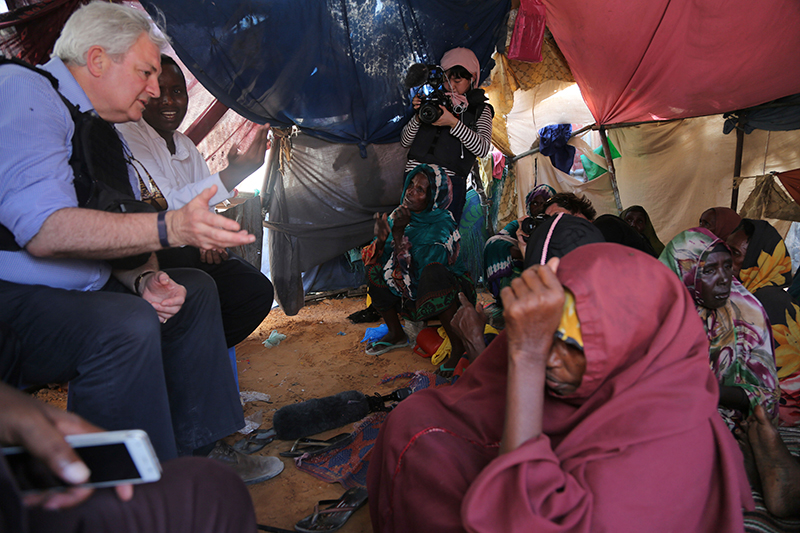 "People are dying. The world must act now to stop this," the U.N. chief tweeted to announce his arrival in this Horn of Africa nation.

"We need to make as much noise as possible," said Guterres. "Conflict, drought, climate change, disease, cholera. The combination is a nightmare."

The U.N. leader urged international support to provide food and humanitarian aid to Somalia. "This hunger requires a massive response," he said.

Welcoming the U.N. chief, Mohamed said: "My first priority is to address this drought crisis and my main priority is to make an appeal to the international community to help us."

Somalia is one of the six Muslim-majority countries affected by the new travel ban ordered by U.S. President Donald Trump.

"Definitely we will prefer to see that this travel ban should be lifted and, of course, we have to communicate with the U.S. government because as everyone knows we have a large Somali community in the United States who I'm sure have contributed to the U.S. economy," said Mohamed, in response to press questions. "We have to address the root cause, which is the security situation here and how to defeat (Somalia's Islamic extremist rebels) al Shabaab here."

Guterres said he was pleased to meet Mohamed, who was elected and inaugurated last month. "I am bringing a message of solidarity to the president. A message of support," said Guterres. "Let's hope he can start and inclusive government."

Somalia is part of a massive $4 billion aid appeal launched last month for four nations suffering from conflict and hunger. The others are Nigeria, Yemen and South Sudan, where famine already has been declared.

Somalia over the weekend announced its first death toll since declaring a national disaster last week, saying 110 people had died in a 48-hour period in a single region.

The United Nations estimates that 5 million people in Somalia need aid, amid warnings of a famine.

U.N. humanitarian chief Stephen O'Brien on Monday went to a camp of hundreds of Somalis who came to Mogadishu in search of food aid. Thousands of hungry people have trekked to the capital, overwhelming aid agencies.