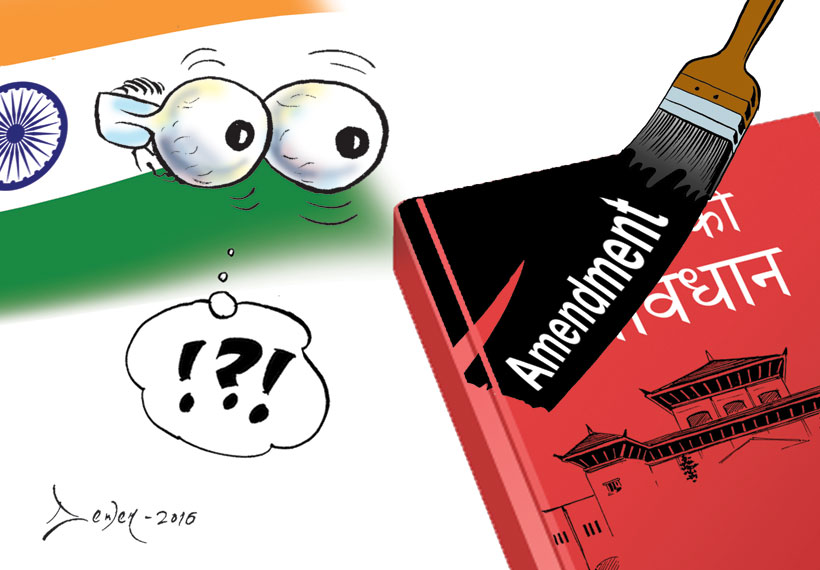 “Whenever there are disturbances in Nepal, especially in the Tarai, voices start appearing, whispering campaigns begin, and social media starts churning, that India is behind this, or India is doing that,” Indian ambassador to Nepal, Ranjit Rae, had told us in an interview back in September, 2015, right before the promulgation of the constitution and the ensuing border blockade. On the other hand, Rae continued, “we also hear India is not doing enough to prevent disturbances”. Rae was hinting that as the preeminent external power in Nepal, India is forever trying to find a respectable middle way between aloof silence and overt meddling.

Following the registration of the second constitution amendment bill in parliament, India is once again being blamed of needlessly meddling in Nepali politics. Even though both the main opposition and the Madheshi Morcha have rejected the amendment motion, India welcomed it as ‘an important step’. This was a lot coming from a country that had merely ‘noted’ the promulgation of constitution last year, even as the rest of the world readily welcomed the new charter.

So why this sudden change of heart? Why did India welcome the second amendment motion even though the Madheshi parties, whose six months of the blockade of the Nepal-India border it had enthusiastically supported, rejected the motion as “incomplete” and “too little, too late”? Replying to a query about the proposed amendment in Nepal, Vikas Swarup, the spokesperson at the Indian Ministry of External Affairs, recently said: “Our consistent position has been that peace, stability, and progress of Nepal is in the interests of both India and Nepal”. The operative words here are ‘peace’ and ‘stability’. It is not hard to discern from this change of tone that there is realization in India that perhaps it went too far with the blockade last year and so time is ripe for a ‘course correction’.

The new harp
Ever since the blockade was lifted in February, there has been a concerted effort by India to help Nepal find peaceful solutions to the constitutional disputes. For continued instability in Tarai-Madhesh presents India with a big security challenge. Yes, India would still like to see Madheshis adequately accommodated in the new constitution. But it is also putting pressure on Madheshi parties to be flexible on their demands so that a compromise solution can be worked out. The goal is again to restore peace and stability in the Tarai belt at the earliest.

But if peace and stability in the Tarai belt is now India’s only concern, what do we make of the accusation that India is actively fomenting unrest in Nepal? CPN-UML has been particularly keen to sell the theory that India wants a state of ‘controlled instability’ in Nepal so that it can keep playing the mediating kingmaker. Alternately, UML leaders increasingly like to cite Indian intelligence literature to establish another dangerous game India is playing in Nepal. Their particular favorite is a little passage from Mission R&AW, a book by RK Yadav, a former operative of RAW, the Indian external intelligence agency.
In the oft-cited snippet, Yadav, quoting the inaugural RAW chief RN Kao, writes: “Kao told me that after the merger of Sikkim [into India], he had the plan to disintegrate the Tarai area of Nepal because of increasing presence of China there…” However, Yadav continues, “the merger of Tarai of Nepal was deferred in view of the political turmoil in India when Indira Gandhi declared emergency…” Deferred, not cancelled, UML stalwarts note. Such documents leave no doubt in their minds that India is once again up to no good in Nepal.

Is RAW still pursuing that misguided policy after all this time? Who knows! I personally think it’s a bit of a stretch to link India’s support of the second constitution amendment with the old RAW plan to break off Tarai plains.

When I asked senior UML leader Pradeep Gyawali if he really believed the rumors of India-inspired secession, he was circumspect, saying only “some elements” in India were at it.
It is also hard to see what India will achieve if the Tarai-Madhesh secedes from Nepal.

Whether the region stays independent or India is able to somehow merge it with the Indian union following its secession, the already dangerous level of volatility in the region could get a lot worse in an independent Madhesh. The last thing India wants, with its hands full with Pakistan and Kashmir and the forever restive north-east, is another perennially unstable region at its doorstep.

Nor it is just about what India wants. Anecdotal evidence suggests there is a sizable mass in Madhesh, largely comprised of young Madheshis, who would like to live in provinces that have clear plurality of native Madheshis, if not a country of their own. The millennial generation of Madheshis does not feel any emotional attachment with Kathmandu, which, in their view, has done nothing good for them—ever.

The Madheshi parties are under tremendous pressure not to been seen compromising easily with Kathmandu. So even as India welcomed the second amendment of the constitution, the Madheshi parties were in no position to accept it—not at the risk of being pushed into irrelevance by the radical elements and their seductive slogans of self-rule of Madheshis under a separate country.

The oldest game in K-Town
Then there is China and the old Indian fear of its possible encroachment into the Indian sphere of influence—defined as comprising the three kingdoms of Bhutan, Nepal and Sikkim at the time of India’s independence in 1947. If Kao and Gandhi were so worried about growing Chinese presence in the Tarai back in the 1960s, the Indian establishment today must be losing its sleep at how China has been able to steadily expand its influence in the whole of Nepal. Exhibit A of this kind of paranoia is the statement by the Indian State Minister for Information and Broadcasting Rajyavardhan Singh Rathore, that the Kathmandu-based Confucius Institute could help produce “a new generation of Nepali intellectuals with pro-China tilt”.

So there seems to be a realization in New Delhi that its interests in Nepal will be best protected by taking the establishment in Kathmandu into its confidence. The new Maoist-Congress coalition has duly obliged, promising New Delhi that there will be no overtures towards China during their reign; and hence the Indian support for the constitution amendment and new emphasis on peace and stability. At the risk of sounding simplistic, the reason India wants ‘structural guarantee’ in Nepal is to keep China and other big powers out. In this larger geopolitical game, the rights of the Madheshi people come a distant second.