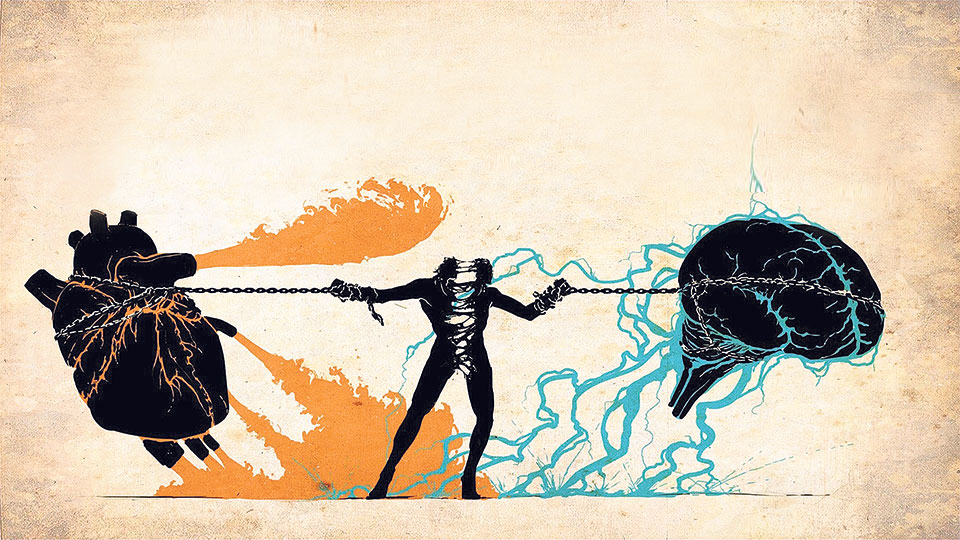 The first time I voted, I was undecided. Torn between subtle family pressure (both my parents were dedicated Kangresi voters) and my wish to give a chance to new forces (I was supposed to vote as an individual, not as part of my family), I really didn't know whom pick. I was having a running debate in my head even as I lined up to vote outside the polling booth. When my turn came, my mind was made, if with great difficulty. I went in, stamped the ballot paper and heaved a huge sigh of relief. My week-long mental torment had finally ended.

The second time I went to vote was no different, as even this time I constantly wrestled with the humongous repercussions of my lone vote: why, it could be the difference between someone winning and losing. Not just that.

My vote could be so important as to eventually shape the composition of the new government, and even the country's destiny. Delusional, I know, but don't all voters have these same competing thoughts?

If your vote makes no difference, why vote at all? Anyway, even this second time, when my turn came to vote, I had made up my mind. This time, I would vote for a different party than I had voted for the last time.

Ah, first love
I enter the polling booth and am about to put the swastika in the little box with the symbol of my new party of preference when I start having second thoughts. I want to put the stamp next to the new symbol but my right hand is aching to vote for the same party I had voted for the last time. This old party symbol I had been familiar with since the restoration of democracy in 1990. On election eve, I had seen it plastered and pasted everywhere in the city. Most importantly, it was the symbol of a party I had picked the first time. First love, then.

The second time I voted was perhaps also the first time I realized how difficult it is to break an old habit, to try something new, even when you know that doing so will benefit you. Perhaps this is why many of us persist with a myriad of bad habits that we so desperately want to break but just can't. I know I should get up every morning and get on my exercise bike. As that is my only exercise in the day, it is important. But every morning, I have to spend every single ounce of my willpower to get on that darn thing. You know I would rather turn on the TV and watch the Ashes, any day.

Then there was a time when my father was transferred to Dhulabari, Jhapa. With no friends in the vicinity, the young adolescent had to find something to distract himself with. So one day I go to this little shop to fetch paan for my father and what do I see at the back of his stall? A huge pile of Hindi comics. I ask the shopkeeper if I can borrow one. He says I can, if I made a small deposit.

Comic-book imperfect
I don't exactly remember my first Hindi comics but what I do recall is that I was instantly hooked. Soon I started borrowing three or four—every single day. Crookbond. Ram-Rahim. Nagraj. Chacha Chaudhary. Bankelal. I had an endless choice. But there was a wee problem. All the time I should have been doing homework was now spent browsing these colorful comics. I couldn't help it. I was just a kid, you see.

I was reading Hindi comics for years after that, perfectly happy to trade good grades for rib-tickling tales of Fighter Toads. It was only with great difficulty that I eventually took to reading English novels instead, starting with Agatha Christie and my favorite detective Hercule Poirot ('Oui, monsieur'). To this day, whenever I see a glitzy Hindi comic, my first instinct is to take it home—and I don't even enjoy them much these days. Pure instinct again.

There are in fact countless annoying habits that I would like to put a stop to. But I just can't make myself do the right thing. Charles Duhigg suggests that if we want to establish a new habit, we should immediately reward ourselves for it. For instance, if I get up early this morning and get on that exercise bike, I immediately help myself to a luscious chocolate. In time, the body will automatically associate cycling with chocolate and, lo and behold, I would be cycling every single day.

He argues that in essence we humans are no different to the dogs whom we teach new tricks by giving them yummy treats. I wonder how this dynamic works in relation to our voting patterns. Perhaps the election candidates who are organizing lavish feasts for their prospective voters know exactly what they are doing. And so do those who inundate media with election ads. I can vouch for it. Any guesses whom I voted for this time?

Central Committee of the CPN (US) meeting today
26 minutes ago