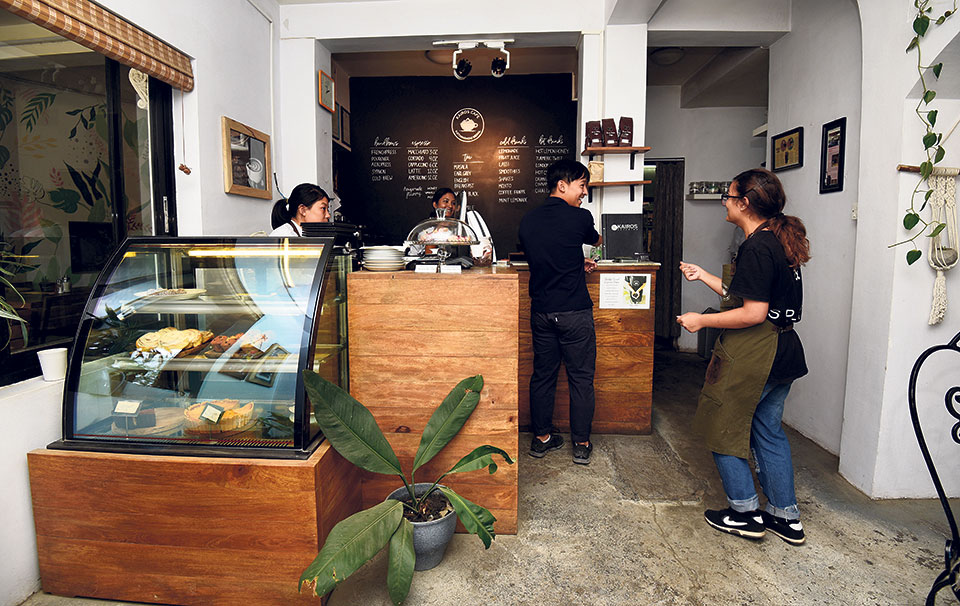 Something my parents always advise me to do is to pack my own lunch and snacks every day and to avoid eating out as much as possible. For them, eating out equals eating greasy and unhealthy food and that might be true a lot of times since a majority of restaurants do serve such food. But every once in a while, you stumble across that one eatery that serves everything fresh and healthy – a place that gets even your parents’ approval. That is Kairos Café for me.

It’s a relatively compact cafe located in Jawalakhel, Lalitpur that has been running for over five years now. Harrison Jones, consultant at the café, reveals that Kairos has undergone multiple stages in its development. When it opened, the founders wanted it to look and operate as a teahouse and they only served tea and breakfast. Some time later, they started serving lunch and it has only been about a year since they added dinner to their menu. The cafe also has an adjoined catering service – both of which are lead by the general manager, Mukti Tamang.

The name of the cafe, Kairos, is a Greek term that means an opportune moment (just before something really big happens). “We feel that a big change is coming to Nepal and that Kathmandu is turning into this hub that a lot of people from all over the world are visiting to observe the culture,” says Jones adding that the name also makes sense as the cafe is providing employment opportunities to people who were once vulnerable to human trafficking and thus helping them create better future for themselves.

The Kairos team also settled on a Greek name as they thought the food they serve resembles Greek food a bit since it is known for being fresh, clean and healthy. Harrison further adds that serving good quality and healthy food is of utmost importance to the team and that the cafe is pretty consistent in terms of taste and standard of the food they serve every day. They also prepare almost everything – including all the sauces – at the café’s own kitchen.

The freshness Harrison kept emphasizing on came through in their Smoothie Bowl. The basic smoothie felt very fresh and I appreciated the fact that they didn’t add any sugar to it. It tasted strongly of guava and banana, and had a slightly bitter side to it that I enjoyed very much. The bowl was pretty light and personally I wished it had just a little more granola in it.

I also really liked the Eggs Benedict and the Chicken Parmesan I tried at Kairos Café. Their Eggs Benedict was also pretty light – suitable for breakfast for one – and played on subtle flavors. It contained two bagel halves with an avocado spread topped with bacon strips, poached egg and hollandaise sauce, and it was served with a side of seasonal fruits. The Chicken Parmesan is an Italian dish that contained linguini spaghetti with crispy chicken breast marinated in sauce and topped with grated parmesan. The noodles were chewy and the chicken was perfectly cooked.

My favorites at Kairos Café however were the two caffeine items I tried there. Their standard Cappuccino had a rich creamy texture and tasted strong and a little bitter. The other item, Lavender Latte, was something I wasn’t meant to review but I liked it so much that I want to include it here. It’s a fall drink that has cinnamon and lavender added to it. I want to suggest everyone who visits Kairos Café to try out their drinks since they are different and unique and taste really amazing.

Besides the food, the Kairos Café team have taken up the theme of freshness and implemented it in their decor as well. The café has a lot of plants and succulents in two out of its three seating areas and one of the walls is covered with a bunch of painted leaves. Jones mentions that since Kathmandu is pretty polluted, their team wanted the café to feel like an oasis of calm – a place where one could relax and rejuvenate without having to pay a hefty price for it.

Overall, I really liked the cafe. It has a fresh vibe that was also reflected through both its food and decor. This is where you get tasty food that is pretty healthy and what’s great is that the dishes are reasonably priced. I’m pretty sure I’ll visit the café regularly in the future – mostly because the food they serve is exactly to my liking but also because I like the ambience of the place.

There are so many restaurants in Kathmandu that you could go to a new one each week and still have... Read More...

A little bit of everything

Café Fika is one of the three restaurants run by brothers Ronak Giri and Shashank Giri. The café is situated... Read More...

Almost every café or restaurant has waffles on its menu these days. But none of these places serve good waffles.... Read More...