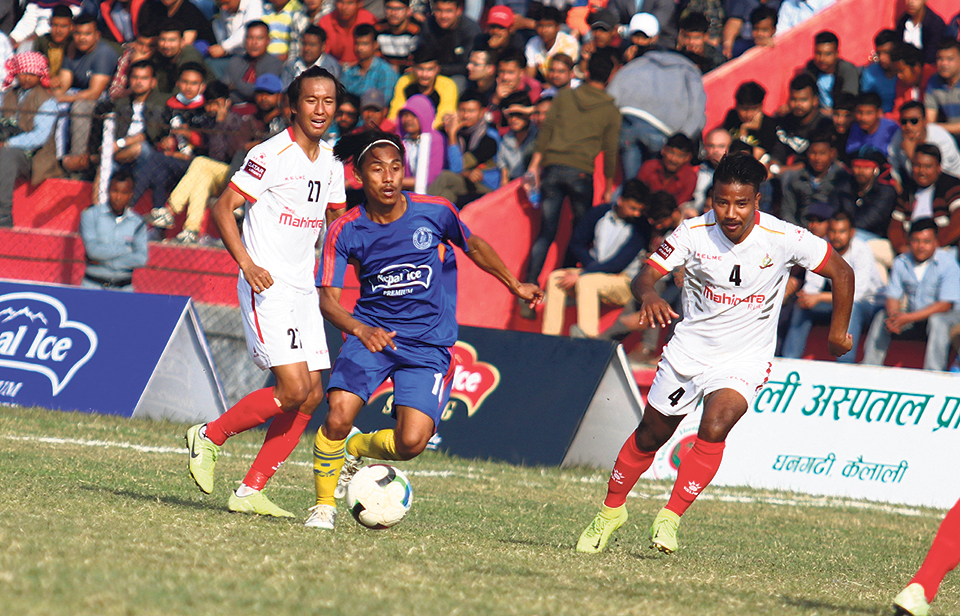 Host Suduspachim started the semifinal at the Dhangadhi Stadium with an aggressive play, taking the lead in the eighth minute.

Thakuri comfortably converted a pass from captain Gajendra Shahi putting the host in front before doubling the leading three minutes later with his second goal to complete the revenge against the departmental team.

Sudur Paschim had lost to APF in the semifinals in the second edition of the tournament.

His second brace in a row also takes his individual tally to four. Thakuri has scored two against Indian club Kanchanjunga FC in the quarterfinal on Wednesday.

The departmental team showed some fighting spirit in the 25th minute with a goal from Ashish Lama, but failed to make a comeback.

“Thakuri was amazing. He did what he was assigned to do.”

Thakuri had a number of other chances to score a hat-trick. He had a shot attempt utilizing a pass from Binod in the 48th minute but it went wide.

He was one versus one with the APF goalkeeper in the injury time twice, but failed to execute them.

“After taking the lead in the first half, our players came under pressure. But, in the second half, we led the attack and dominated the match,” added Chaudhary, who had to replace goalkeeper Sujit BK in the injury time with Pritam Khadka after BK suffered an injury.

“Bikram missed a number of real chances. But he was good.”

“We have a stronger opposition to face in the final. I hope we can present a strong challenge to them,” he furthered.

The host will take on either Three Star Club or Himalayan Sherpa Club in the title challenge on Tuesday. The two A-Division clubs will face each other in the second semifinals on Sunday.

AFP coach said two goals in the early minutes cost them the semifinal.

“We conceded two goals before we were set and it became expensive,” said Sudeep Shrestha.

“We also failed to convert some golden chances,” he added.