Tea production in Ilam likely to fall by a fifth 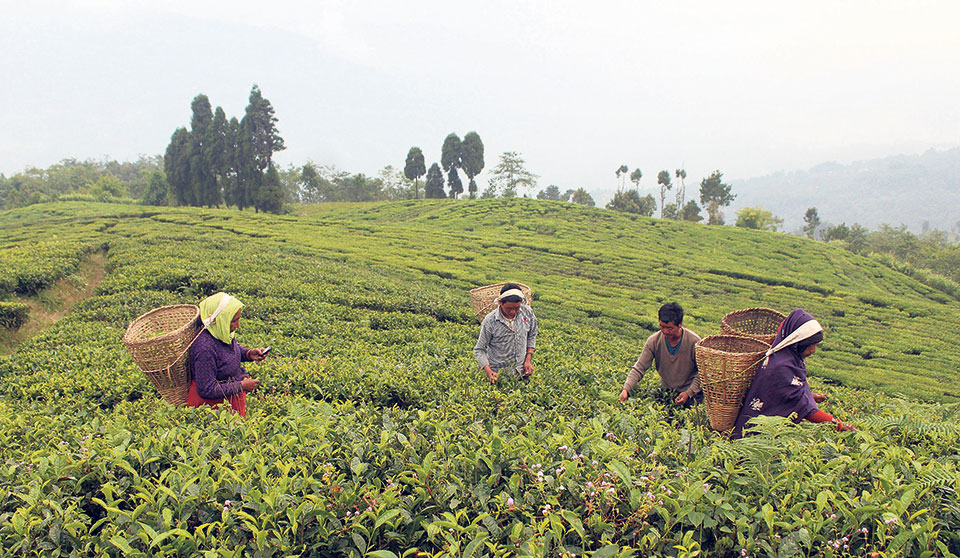 ILAM, Oct 29: Tea production in Ilam is likely to drop by about a fifth this year due to incessant rainfall and fog, tea entrepreneurs have said.

Unfavorable climate will lower production this year in comparison to the previous fiscal year, according to the entrepreneurs.  The factors behind the fall in production in the current year are different from those of the previous years. Drought, shortage of fertilizers, and lack of irrigation were the challenges in the past years.

“Heavy rainfall and fog have damaged tea buds this year, lowering the production,” said Kamal Mainali, promoter of Sakhejung-based Himalayan Shangrila Tea Producers Pvt. Ltd. Mainali’s industry had alone produced 120,000 kilograms of tea last year, but the output seems to be just close to 100,000 kilograms this year.  “I do not see any chance of further growth in the production as we have only two weeks for picking green leaves,” said Mainali. The season of picking green leaves ends around mid-November.

Even the tea gardens leased by the government have similar situation. Officials of the tea estates of Kanyam, Ilam, Soktim, and Chilimkot have also reported that the volume of tea leaves harvested has seen a decline this year.

“Kanyam tea estate has collected less green leaves and this will lead to a depression in the production to a range between 20,000 to 25,000 kilograms in total,” said Rajnish Mudaliyar, manager of Kanyam Tea Estate.

Mudaliyar further said: “Tea production has largely been affected by heavy rains during last winter and this summer, apart from fog in the hills of Ilam district.”  The management officials of organic tea producers  -- Ilam Tea Estate and Barne Tea Estate of Jhapa -- have also reported a decrease in production of leaves. The rainfall in the first flush (late March - early April) had made farmers hopeful of better harvesting of the green leaves but the second flush (May-June) disappointed them.

According to local farmers, rainfall in the first flush did not seem to affect the green leaves but green tea collection was affected in the second flush.

Sharad Subba, one of the promoters of Maipokhari Tea Processing Industry, said: “Our industry focuses on producing organic tea and we had been flooded with green leaves initially, making us hard to manage the processing of the whole but the rainfall damaged green tea leaves and collection slowed.”

Some industrialists have an alternative idea to cope with the recurring impact by the rainfall and suggested to opt for producing tea saplings by sowing seeds instead of continuing long-practiced grafting technology to prepare new saplings of the tea garden.

Talking to Republica, promoter of Suryodaya Municipality-based Gorkha Tea Estate, Udaya Chapagain said: “Tea plants produced by grafting have high risk of being affected by climate change.”  Chapagain has learned new methods of tea farming from his different tours to the US, China, and countries of Europe to study tea farming in recent years.

All 7 provinces likely to get govts by weekend

KATHMANDU, Feb 3: Two months after the results of the provincial assembly elections, a federal province has its own government a... Read More...