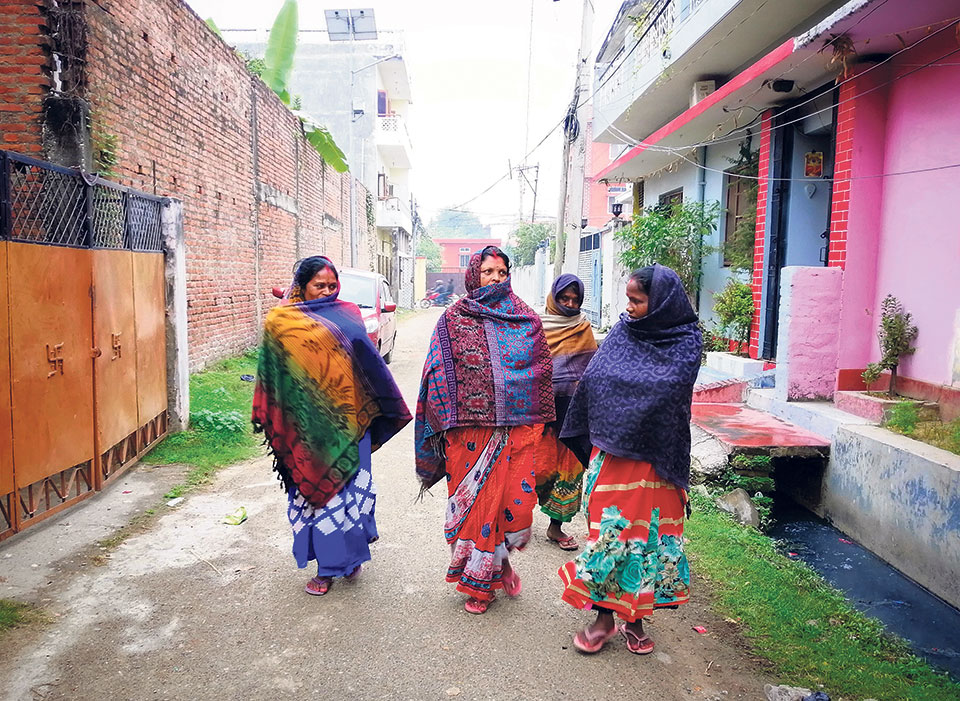 Women in a Birgunj locality wrapped in shawls to keep themselves warm following a sudden dip in mercury in the city on Friday. Photo: Ritesh Tripathi

BIRGUNJ, Dec 14: Parts of the tarai districts including Sarlahi, Bara, Parsa and Rautahat remained 'dark' in the day time on Friday leaving people quite worried. There was a slight downpour and coldwave as well. Locally termed as 'Meghauni' (apparent darkness in the day time due to heavy clouds), people anticipate worse weather ahead.

According to agriculture expert Shankar Pandey, this must be the impact of the westerly winds which bothers Nepal every year.

"Although we are used to the effects of westerly winds and the chill, the darkness most of the parts of the tarai witnessed on Friday has left people worried," said Pandey. He added that the arrival of the chilling cold was rather sudden this time. Till Thursday, the weather was not that bad. And on Friday, it turned totally different.

"We could not even get a glance of the sun the entire day. Suddenly, the weather turned so harsh," said Pandey. "People are scared of Megauni because it is considered harmful for agriculture," he added.

He further stated that winter used to arrive much earlier in the past. Over the years, this pattern seems to have changed. "It is not easy to predict weather pattern these days. We are observing unexpected patterns," he said.

According to Pandey, earlier winter used to arrive before the 'Meghauni'. But this time, it was different. "People have not even taken out their winter sets from cupboard. They have not yet used warm blankets and suddenly the day today turned extremely chilly," he said. "This kind of unusual weather affects crops and cattle badly," he added.

Few people were seen on the streets on Friday owing to the chill and darkness. Some even lit campfire. According to pediatrician Dr Kushraj Giri at Narayani Hospital, children remain most vulnerable during such extreme weather. "Children should be treated with extra care during such weather. Common cold, cough or pneumonia may attack them," he said.

Meanwhile, Dr Ram Chandra Yadav, chief of Agriculture Knowledge Center, Parsa, talked about the effects of coldwaves on paddy and wheat. He assumes heavy loss on for farmers just due poor weather in a single day.

"When such harsh weather prevails for just a day, it does much harm than gradual increase in temperature. Plants also need time to adapt to the weather. Sudden dip in temperature harms them the same way like animals," he elaborated.

Such weather however does not affect the pulses and peas, according to Yadav. They get affected only when poor weather lasts for longer days.

Monkeys in Pashuptinath scramble for food (with photos)
17 hours ago