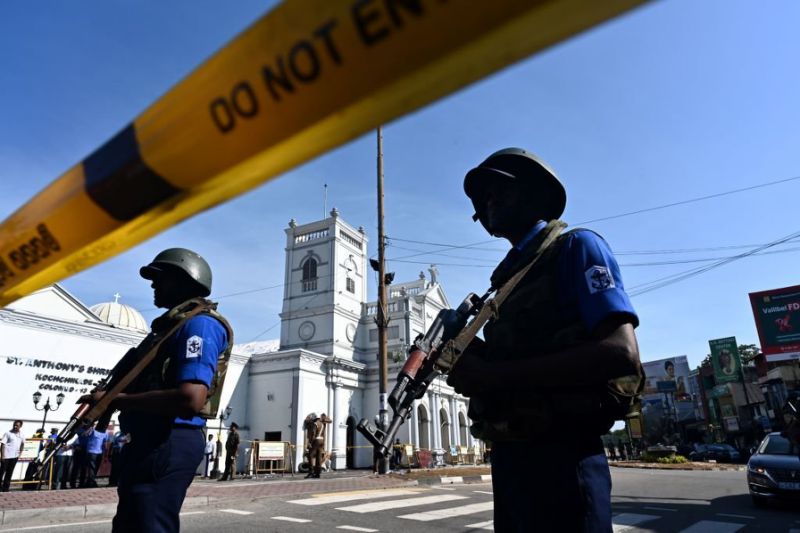 COLOMBO, April 23: Sri Lankans woke to emergency law on Tuesday as authorities searched for those behind suicide bomb attacks on churches and luxury hotels that killed 290 people at the weekend, with the focus turning to militants with links to foreign groups.

No group has yet to claim responsibility for Easter Sunday’s attacks on three churches and four luxury hotels that also wounded about 500 people.

Police spokesman Ruwan Gunasekera said the number of people arrested since Sunday had risen from 24 to 40. They are mainly Sri Lankans, although Gunasekera said police were investigating whether foreigners were involved in the attacks carried out by seven suicide bombers.

The president’s office declared that emergency law would come into effect from midnight, giving police extensive powers to detain and interrogate suspects without court orders. An overnight curfew was also put into effect.

The declaration came after nerves were frayed even further in the seaside capital Colombo when explosives went off on Monday near one of the churches hit in Sunday’s attacks while bomb squad officers were working to defuse a device.

The attacks brought a shattering end to a relative calm that had existed in the Indian Ocean island since a bitter civil war fought by Tamil separatists ended 10 years ago and raised fears of a return to sectarian violence.

It also underlined concerns over fractures in the Sri Lankan government, with questions raised over whether an intelligence tip-off was shared at the appropriate levels.

A government spokesman has said an international network was involved in the bombings but suspicion has focused on Islamist militants in the Buddhist-majority South Asian country. The nation of about 22 million people also has significant numbers of Hindus, Muslims and Christians.

The Washington Post quoted an unidentified law enforcement official as saying Federal Bureau of Investigation (FBI) agents were being sent to Sri Lanka to assist in the investigation.

The FBI has also offered laboratory expertise to test evidence and analysts were scouring databases for information that might shed light on tea attacks, the Post said.

U.S. intelligence sources said the attacks carried some of the hallmarks of the Islamic State extremist group, although they were cautious because the group had not claimed responsibility.

Islamic State is usually quick to claim responsibility for, or links to, attacks against foreign targets or religious groups whether they were involved or not.

A document seen by Reuters showed that police had received a tip-off of a possible attack on churches by a little-known domestic Islamist group this month.

The intelligence report, dated April 11, said a foreign intelligence agency had warned authorities of possible attacks on churches by the National Thawheed Jama’ut group. It was not immediately clear what action, if any, was taken in response.

Questions over why the intelligence warning was not acted upon could feed into a feud between Prime Minister Ranil Wickremesinghe and President Maithripala Sirisena.

Sirisena fired Wickremesinghe last year only to be forced to reinstate him under pressure from the Supreme Court and their relationship is reported to be fraught.

International experts said, even if a Sri Lankan group had carried out the attacks, it was likely that al Qaeda or Islamic State were involved given the level of sophistication of the apparently coordinated bombings.

Footage on CNN showed what it said was one of the bombers wearing a heavy backpack. The man patted a young child on the head before entering the Gothic-style St. Sebastian church in Katuwapitiya, north of Colombo. Dozens were killed there.

Most of the dead and wounded were Sri Lankans, although government officials said 32 foreigners were killed. That included British, U.S., Australian, Turkish, Indian, Chinese, Danish, Dutch and Portuguese nationals.

China’s embassy in Sri Lanka warned Chinese nationals on Tuesday against traveling to Sri Lanka in the near term because of “huge security risks”.

China is a major investor in Sri Lanka. The embassy said one Chinese national was killed, five were wounded and another five were missing.

Among the victims were three of the four children of Anders Holch Povlsen, Denmark’s richest man.

Eight Britons were also killed, including Anita Nicholson, her 14-year-old son and her 11-year-old daughter. Nicholson’s husband survived the attack on the Shangri-La Hotel in Colombo.

“Mr Prime Minister, how would you feel if you didn’t get a kidney ahead of transplantation?” (with video)
19 hours ago

What we saw at Teku Hospital (photo feature)
20 hours ago
Oppn parties fail to secure majority seats in parliament to form new govt, Oli likely to be reappointed as new PM
18 hours ago

What we saw at Teku Hospital (photo feature)
20 hours ago