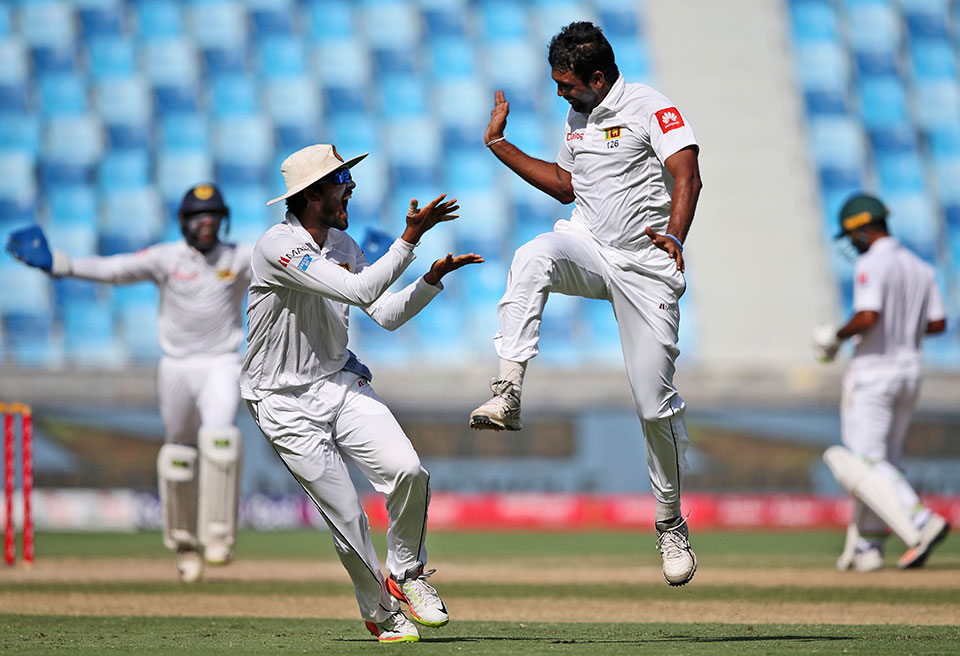 DUBAI, United Arab Emirates, Oct 10: Dilruwan Perera grabbed 5-98 as the offspinner anchored Sri Lanka to a 68-run victory against Pakistan in the second test and clinched the two-match series 2-0 on Tuesday.

Chasing 317 to win, Asad Shafiq scored a valiant 112 before Pakistan was bowled out for 248 inside the first session on day five.

Sri Lanka won the first test by 21 runs at Abu Dhabi and handed Pakistan its first test series loss in the United Arab Emirates since 2010, when the gulf country became its home away from home.

Sarfraz Ahmed scored a fighting 68, but when Perera induced a top edge of the Pakistan captain's mistimed sweep and broke the 173-run stand with Shafiq, Pakistan lost its last five wickets for 23 runs.

Resuming at the overnight 198-5, Pakistan started its pursuit positively on the fifth morning with Ahmed and Shafiq attacking to lift the score to 225-5. However, they rode their luck.

Ahmed survived a stumping on 65, and in the same over, Shafiq reached his 11th century, off 151 balls. The next ball, Shafiq was dropped at first slip, and on 103 he successfully overturned an lbw decision against him.

Seamer Suranga Lakmal finally broke through Shafiq's defenses when he found an outside edge of the second new ball. Shafiq hit 10 boundaries in his attacking knock off 176 balls.

The teams begin a five-match one-day international series, starting on Friday. That will be followed by three Twenty20s, with the last T20 scheduled to be played at Lahore.