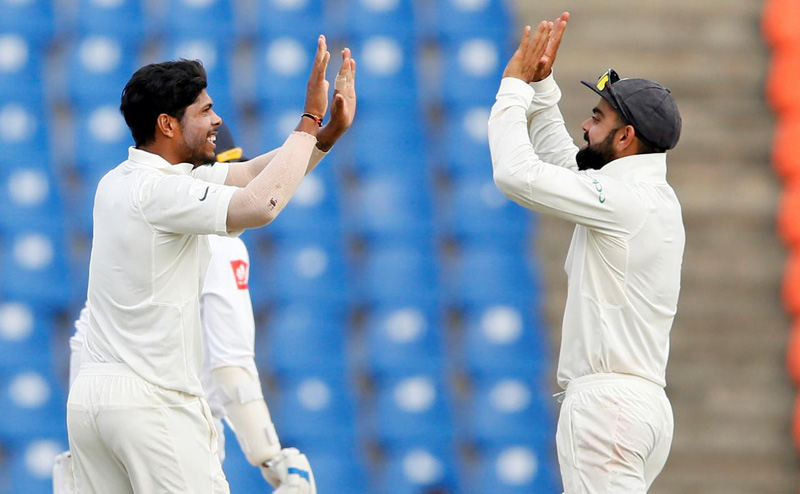 PALLEKELE, August 13: India's bowlers left Sri Lanka staring at a big defeat and a series whitewash after another shambolic batting performance saw the hosts being bundled out for 135 in their first innings in the third and final test on Sunday.

The hosts, who also suffered heavy defeats in Galle and Colombo inside four days, were made to follow on and reached 19 for one at close of the second day's play, still trailing India by 333 with nine second innings wickets in hand.

Opening batsman Upul Tharanga made seven before he chopped Umesh Yadav onto his stumps for his second dismissal in the day. Dimuth Karunaratne was unbeaten on 12 with nightwatchman Malinda Pushpakumara yet to score.

It was all-rounder Hardik Pandya's 108, his maiden hundred, that set the ball rolling in the morning for the whitewash-chasing India, who posted 487 before being all out in the first over after the lunch break.

Pandya smashed his hundred off just 86 deliveries before he was the last batsman out, giving Sri Lanka left-arm spinner Lakshan Sandakan his maiden five-wicket haul in tests.

India fast bowler Mohammed Shami did the early damage to Sri Lanka's first innings by dismissing both openers cheaply before left-arm wrist-spinner Kuldeep Yadav ran through the middle and lower order with four wickets for 40.

Sri Lanka got off to a terrible start in their first innings when Tharanga edged Shami to wicketkeeper Wriddhiman Saha for five and inexplicably called for a review after consultation with opening partner Karunaratne.

Replays showed a clear edge and Karunaratne soon joined his departed colleague back in the dressing room after falling in similar fashion for four.

Kusal Mendis (18) was then run out after a mix-up with captain Dinesh Chandimal before former skipper Angelo Mathews fell leg before to medium-pace bowling all-rounder Pandya without scoring.

Chandimal was the only batsman to provide some resistance with a dogged 48 but became one of spinner Ravichandran Ashwin's two wickets.

Pandya's century was also a maiden first-class ton for the 23-year-old right-hander, who hit eight boundaries and seven sixes in his knock.

India resumed on 329-6 but suffered an early blow when they lost Saha for 16 in the second over of the day after the keeper guided seamer Vishwa Fernando's left-arm delivery straight into the hands of the gully fielder.

Kuldeep showed he was a more than capable lower-order batsman with a well-crafted 26, more importantly adding 62 in an eighth-wicket stand that dampened Sri Lanka's hopes of restricting the touring side to under 400.

Kuldeep fell to his wrist-spinning counterpart Sandakan, who also dismissed Shami for eight.

That brought Pandya, unbeaten on one overnight, and Umesh together for the last wicket, allowing the former a license to free his bat in search of quick runs.

The clean-hitting Pandya soon tore into the Sri Lanka attack and blasted 26 in one over from Pushpakumara, hitting the left-arm spinner for two fours and three sixes in five deliveries.

He reached three figures with a straight punch for four off paceman Lahiru Kumara.

One killed, 22 injured in bus accident
50 minutes ago