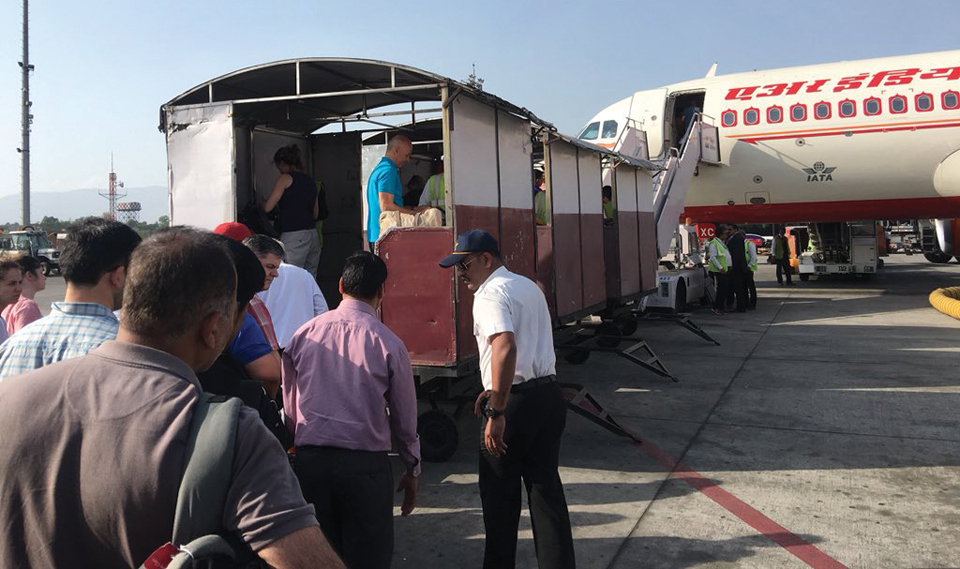 With his Indian counterpart, Nepali PM should take up the issue of additional checks by Indian security officers at TIA. No such arrangement exists anywhere in the world.

It is as good a universal truth that we end up getting more problems in our hand by not learning from past mistakes. In other words, past mistake can be good only if it makes us wiser. The overall state of our aviation sector is an example of our failure to learn.
It remains undisputed that professionals have the capacity to analyze and suggest better practical remedies. Treat the views expressed here as that of a bystander. I would only highlight few areas that need an immediate course correction.

For being the ultimate decision maker, politicians should refrain from adopting choices which will be difficult to adhere to or outright wrong. On matters related to technology/engineering and equipment their decision should be based on several choices as presented by a professional team.

But, at times, they end soft coercing professionals to do things the latter would not otherwise do. Or it could even be other way around with professionals inciting politicians to go for shady deals. It is a double edge sword that cuts both ways. But since politicians are taken to be the custodian of people’s faith, ideally speaking, they need to be careful.

Talking about technicians, the radar atop Bhatte-danda is placed ideally, but the VOR/DME (combined radio navigation station for aircraft), at the same spot many years ago, was an example of horrendous technical oversight.

Much needs to be said about Nepal Airlines Corporation (RA), one obliged to fulfill its social responsibility for being government owned. Sadly, it has failed to provide reasonable and reliable service in the domestic sector by intentionally letting its service nosedive. This was done deliberately by not carrying out timely replenishment or repairs of its STOL fleet. RA has gone astray by leasing even repairable STOL to private operators.

RA’s recent problem is compounded by being burdened with the types of aircraft it never wanted.

It brings a sense of relief that RA is finally buying few Viking-400, the modern incarnate of Twin Otter to strengthen its domestic presence. But, as the rumor goes, the Vikings will eventually be leased out to private operators as the precedence has already been set. If this is the hidden intent then RA’s social responsibility aspects should be rephrased as facilitating private operator as a mode of fulfilling its stated obligations. This will save lots of embarrassments.

RA’s burdens
RA’s recent problem is compounded by being burdened with the types of aircraft it never wanted. Broadly, the failure of MA60 in Nepali skies is the making of both parties namely the maker and the operator. The earliest RA can rid of these the better it will be. Ideally, the ownership of these should be transferred to the Nepal Army for which it was originally intended. Even the smaller Y-12s are also said to be not faring that well for having heavier dead weight and is able to carry fewer passengers making them not as suitable for our kind of operations.

Keeping on to the domestic front, a blatant example of policy dithering has been the impracticability of the charges collected from passenger to subsidize operators that fly to remote regions. The policy remains intact as like the small amount collected lying disused. It was wrong to collect funds without any thoughts about modality of justifiable subsidization. Again, this will be better to get undone at the earliest.

Many domestic airstrips have lost their remote classification due to surface connection to one corner of the district. This is a gross misnomer as the remoteness still remains intact given the general nature of far-flung areas and the terrain. It is incumbent upon the government to devise practical measures to encourage airlines to fly to such regions. The allegedly “pro remote” policy has become a sort of facade at the most.

The fate of much talked Nijgarh airport is in limbo. Bhairahawa and Pokhara (PKH) are two airports under construction but even these have uncertain future given Indian inflexibility. On the other hand, Pokhrelis have been insisting on not just a new airport but one that can service short-haul jets. But this is likely to be problematic because of the narrow nature of the valley as carrying out missed approach, when below 750’ AGL (above ground level), will not be possible. It will virtually be a Lukla like situation, once committed to land there is no escape.

In case of Pokhara ILS (instrument landing system) visibility requirement is set at 3500m. Installing ILS will only make it marginally better than VOR/DME approach visibility requirement set at 4000m. So why install ILS at a huge cost? Pokhara will be better off with turbo-prop aircraft and non-ILS approach as most cities in north India, from where it hopes to get flocks of tourists, falls within their range.

This brings us spot on to the visiting Indian PM while he is still here. Among other issues that have bedeviled relation between two countries, I urge Prime Minister Oli to take up other pending aviation issues including the one related to abhorrent checks by Indian security officers at TIA. First of all, it is disrespectful as India registered airlines are told by their government to comply.

We take it not as just insulting but demeaning upon Nepal and Nepali as no such despicable arrangement possibly exists anywhere in the world.

We should put an end to this insulting practice unilaterally, if necessary. It would not be a big deal if Indian operators stop coming, their number is heavily loaded against ours, as it is. But it will be most welcome if this gets withdrawn voluntarily. Strangely, no other carriers that fly in and out of TIA have security issues, including those from China. Why is it just India having an issue here? Or is it the ever familiar “attitude” towards a small neighbor, as always?

KATHMANDU, June 25: A dead body of an unidentified person was found in course of the weekly Clean Bagmati campaign... Read More...