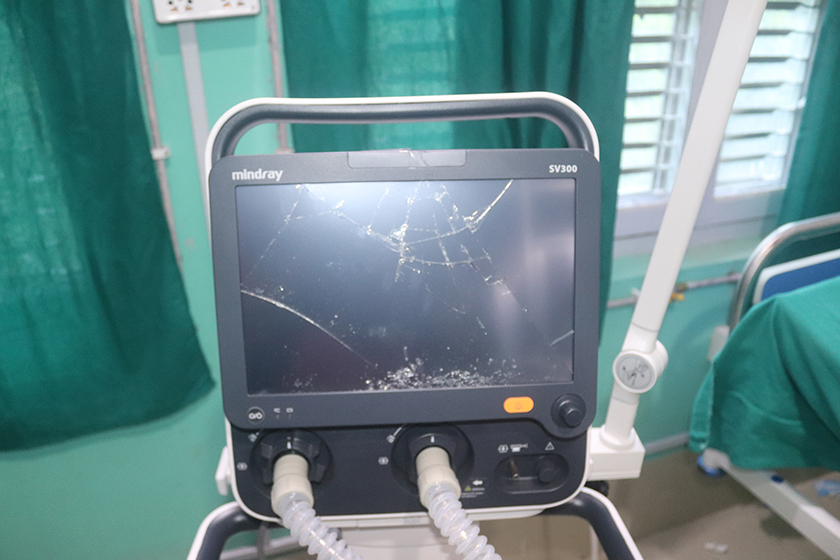 An ICU monitor of Nawalpur Snakebite Treatment Center which was vandalized by the protesters.

SARLAHI, July 12: The snakebite treatment center of Nawalpur, Sarlahi, remains closed for the last three days after protesters vandalized the center following the death of a child.

The closure of the only well-equipped snake bite center between Janakpur and Birgunj has compelled the patients to visit far-flung cities for treatment. Snakebite cases have increased significantly with the onset of monsoon.

On July 8, Sampada Budhathoki, the two years old daughter of Pushkar Budhathoki of Harion Municipality-9 died while undergoing treatment at the center. Accusing the health workers of negligence in the treatment of the minor, family members and locals vandalized the center and damaged the ventilator, Intensive Care Unit (ICU) and important equipment at the center.

According to the family members, the health workers at the center were under the influence of alcohol when they were treating the child.Bodhraj Kafle, chairperson of the management committee of the center, stated that they are unable to run the center because the protesters vandalized the newly-purchased equipment which are very essential for the treatment of people bitten by snakes. "The hospital has incurred a huge loss after the incident. We were able to install the ventilator and ICU after a long struggle," said Kafle, adding, "As the protesters also thrashed our health workers, we had no option other than shutting down the hospital."

He claimed that the child could not be saved as she was too young and the venomous snake had bitten her twice. Last month, the provincial government had invested Rs 3 million while Lalbandi Municipality spent Rs 535,000 for the installment of the ventilator and the ICU at the treatment center.

On Tuesday, five snakebite patients had to return home empty-handed as the center was closed.

A five-member investigation committee was formed on Thursday to investigate the death of a snake-bitten minor at Nawalpur Snakebite Treatment Center on Monday. Chief District Officer (CDO) Krishna Bahadur Raut informed Republica that action will be taken based on the findings of the probe committee. The committee has been formed under the coordination of Dr Rupesh Yadav of the District Hospital, Sarlahi. The committee is supposed to submit its report within a week.

Snakebite patients up in West Nawalparasi

PARASI, Aug 14: Number of snakebite patients has increased at West Nawalparasi with increasing heat and rains of late. ... Read More...

Parbat Hospital is sick, patients compelled to go to other districts