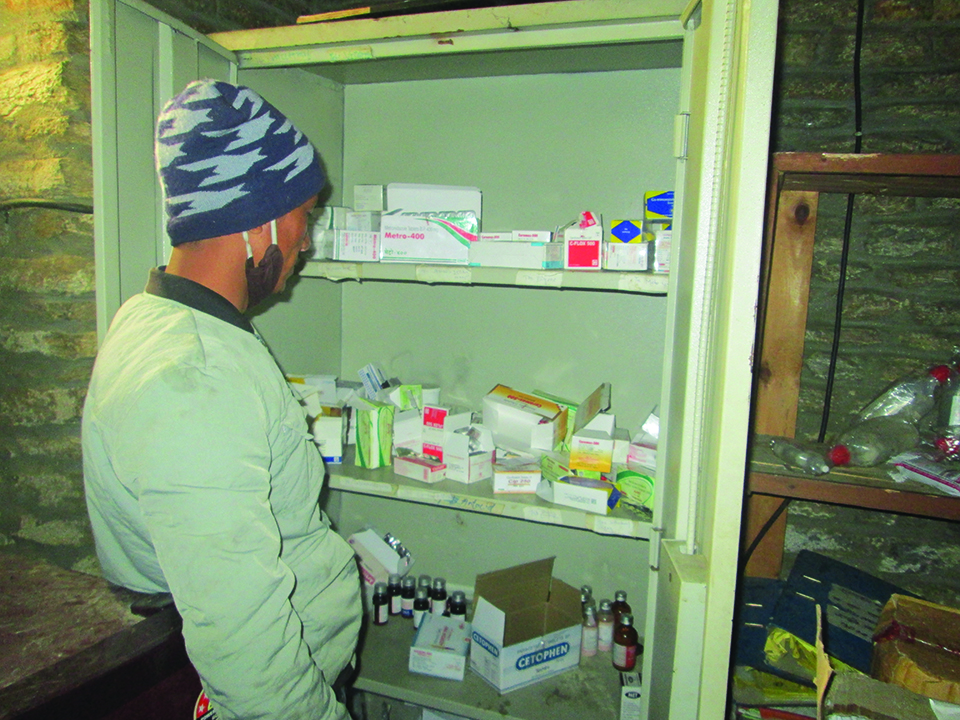 A private pharmacy is seen outside a health post in Tatopani Rural Municipality, Jumla in this recent picture. Photo; DB Budha/Republica

Paracetamol is one among the 35 types of basic drugs that the government is supposed to avail for free from all its health facilities across the country. However, the lack of the availability of these drugs in these health centers is very disappointing for the patients.

However, the shortage of such drugs in the district's health posts is not a new case. Citing different reasons, health posts and hospitals often return patients home without providing free medicines. "It happens not just in health posts or centers, but also in hospitals. When they say there's no medicine available, patients are left with no choice other than to buy from private pharmacies," said Bohora.

"It is not just about drugs, health centers say they don't have first aid, syringes, and even vaccines. How can the authorities concerned be so much negligent of the public health." ---Dhanendra Bohora, a patient

After failing to get paracetamol from the health post he checked in at a private pharmacy and the purchased the drug. |Since it was not an expensive medicine, there was not much reason for me to worry about. However, it is not the same case for everyone. For some people, even a little money counts. And when they have to buy from private pharmacies, it can add up to their financial burden," said Bohora adding that the financial burden on patients becomes higher in case of expensive drugs.

A lot of elderly people receive drugs related to asthma from health posts and hospitals for free. It is important for asthma patients to take the medication regularly or else the gap can be fatal in some cases. But since they are not provided with the medicines regularly, a lot of such patients' health suffers.

According to locals, since the implementation of the federal setup, the shortage of medicine has deepened further. Prior to the implementation of federalism order, the health ministry was solely responsible for availing such drugs to government health facilities. However, since the establishment of local bodies, the responsibility is now that of the local level body. Citing the lack of budget, local levels have been shying away from their duties.

"It is not just about drugs, health centers say they don't have first aid, syringes, and even vaccines," Bohora said. "How can the authorities concerned be so much negligent of the public health."

Lilakot and Lamra health posts are considered among the remotest ones in the district. In these areas, even private pharmacies are not widely available. When health posts disappoint patients, they have hardly anywhere to go to buy them. "In emergency cases, what would a person do? Sometimes, a person's life is on the line and getting the right medicine on time can be life saving," noted Bohora.

As per the new provision, local health posts are required to submit a demand letter to their respective rural municipality or municipality outlining the type and quantity of drugs required in their pocket area. But because respective coordinators of health division in the wards did not submit the demand letter on time, the supply got affected, said Chairperson of Tila Rural Municipality - 2, Kali Bahadur Rawat.

"If the demand letter of their area had been submitted on time, the required budget would have been released on time. But the coordinators did not do that and as such, they are facing these problems," said Rawat.

There is one municipality and seven rural municipalities in the district. And currently, all of them are facing a shortage of drugs. Apart from the above reasons, Rawat said that the focus of local level bodies on prioritizing developmental projects has affected services in health and educational sector. "All local bodies have been focusing more on new developmental projects, this has somehow affected existing programs," he remarked.

Health post In-Charge at the Raralihi Health Post, Dinesh Chaudhari lamented even the lack of dressing cotton or bandages at the health post. "It is very difficult to work in such a situation," he said. "We have been urging the authorities concerned to solve the problem without delay, but the requests have been falling on deaf ears. It is every handle the patients in such a situation," Chaudhari said.

A health worker in Lihi village, Gaurikala Pariyar feels no less sorry when she has to return patients with fresh injuries without providing them proper first aid. "Without first aid and proper bandages, injuries are vulnerable to infection. But in lack of first aid materials, we have to deject them," she said.

TORONTO, Jan 15: A Chinese court sentenced a Canadian to death Monday in a sudden retrial of his drug smuggling... Read More...