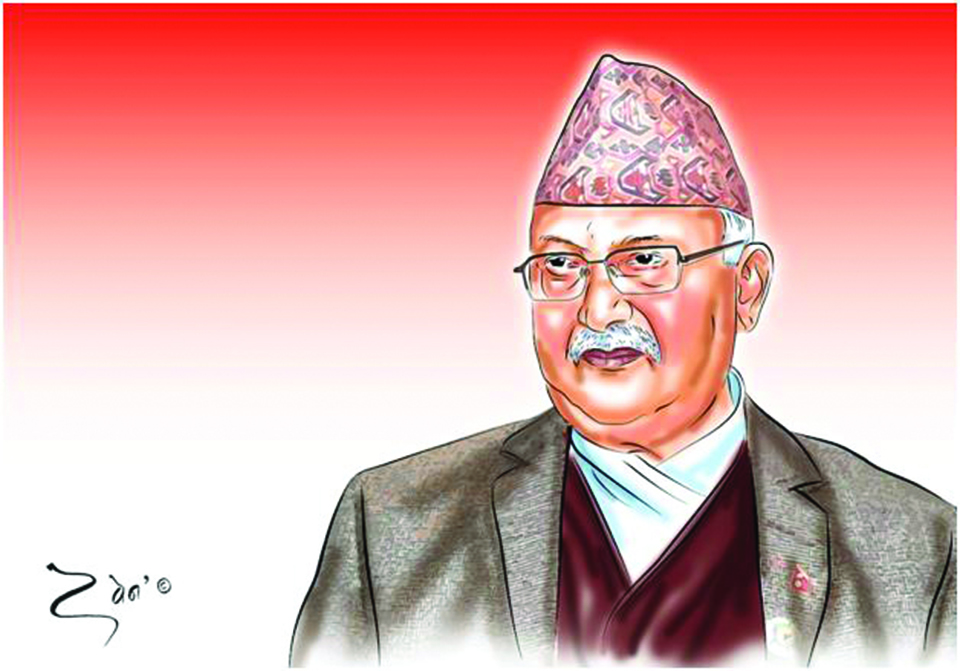 Prime Minister KP Sharma Oli is paying a six day official visit to China from today. Recent months have been momentous for Nepal, neighbors, region and the world at large.  Prime Minister goes to China with full confidence as the head of majority government following the conclusion of historic democratic transformation process. The recent overtures seen to mend relations between India and China, Japan and China, first ever Singapore summit labeled as the “summit of the century” between the US and North Korea and China’s position on these developments carry significant implications for geopolitics in Asia.

Prime Minister is advised to remember the contents of “The Chinese Dream” that entails the essence of greater prosperity at home and greater prominence internationally. As Beijing demonstrates enhanced diplomatic role and deploys increased economic resources and military force around Asia and in the rest of the world, in the context of President Xi Jinping’s vision to present China as “a global leader in terms of comprehensive national wealth and international influence” by midcentury, it has profound impact for the region and the world at large.

The visit comes against this background. Nepal and China, in the words of President Xi Jinping, enjoy “permanent friendship and comprehensive cooperation” based on five principles of peaceful coexistence—Panchsheel.  President has called for “joint efforts to safeguard the positive momentum of China-Nepal relations and open up a new situation for bilateral friendly cooperation”.

In March 2016, President Xi told the Oli that “Nepal can be a bridge between China and India.”  President also talked about the trilateral China-Nepal-India relationship, which he hoped would benefit Nepal from development in China and India. Xinhua new agency quoted the President as saying that it is in the common interest of the “two big neighbors” that Nepal enjoys stability and development.  The Chinese have been investing in roads, ports, airports and other infrastructures throughout South Asia and beyond. China has increased interests in regional affairs in South Asia.  Developments across globe put China at the centre to influence, shape and set global rules and standards. Where do we stand on this? What will be Nepal’s positions on each of these issues? We will have flesh these questions out and show seriousness in doing business with China.

If 2016 visit was taking place immediately after the lifting of economic blockade imposed by India, the current visit comes after exchanges of quick high level visits between Nepal and India, and India and China. India has issued instructions to its officials not to attend programs of the Dalai Lama because of the “sensitive nature of the subject.” We need to read these signals in an integrated manner.

China’s peripheral diplomacy combines politics, economics and security. Neighbors occupy a crucial place in China’s strategic management.  Tibet remains one of its core security concerns. The location of Nepal prominently figures therein, as China is concerned about the possible plays by Western powers on the Tibet issue from Nepali soil. While Nepal unequivocally maintains ‘One China’ policy and does not allow any activities against China from its territory, the presence of ‘Free Tibet’ advocate at the embassy reception organized to welcome visiting Nepali PM in Delhi in April is seen as an aberration.

On March 27, 2017, President Xi Jinping told visiting Prime Minister Pushpa Kamal Dahal that “two sides should continuously enhance political mutual trust and exchanges at all levels, and support each other on major issues concerning each side’s core interests.” There has been no visit at the highest level from China in the recent years. China has been inviting political parties, officials, media persons, and security officials but high level political contacts and interactions have no substitute.

Nepal’s participation in Boao Forum was revived after a gap of 15 years during the time of Sushil Koirala government in 2015 (the first being in 2001 by late king Birendra)  and Nepal got a dialogue partner status in Shanghai Cooperation Organization  (SCO) the same year. Nepal’s participation in both the forums was missing this year.  Thus we have to read President Xi’s call for enhanced “political mutual trust” in an integrated manner to decode the message.

What Oli should do

The visit will have to work out details for the implementation of 10 agreements, including the one related to transit and trade signed between Nepal and China in 2016.  Notwithstanding the distance (Guangzhou is 2,844 kilometers from Kathmandu compared to 866 kilometers from Kolkata), cost, limited infrastructures, and difficult terrain in using transit rights through Chinese territory, agreements should go ahead.

Reopening Tatopani border point, which remains closed after 2015 earthquakes, should be the priority. Extending railway connectivity from Lhasa-Xigatse to Kathmandu would go a long way in adding new dimensions in Nepal-China relations.

Belt and Road Initiative (BRI) is Beijing’s foreign policy priority. Chinese leadership proposes “joint construction of Belt and Road” as an opportunity to steadily promote cooperation in various fields including connectivity. As a party to BRI, Nepal should come out with concrete projects under BRI to enhance cooperation and increase Chinese investments.  Nepal’s contradictory position over West Seti project has sent confusing signals to the investors. Perhaps this confusion prompted Chinese Foreign Ministry spokesman Hua Chunying to comment that the report is not true. He has said that “Chinese firm involved is in talks with the Nepali side on this cooperation project’s economic feasibility and other concrete matters.” China would expect Nepal to be a reliable partner to safeguard the interests of Chinese investors and contractors.

China recognizes the geopolitical realities and has been advising Nepal to be “friendly with India without being hostile to China.”   Playing one against another is suicidal for Nepal. Trust based relationship with neighbors is the breath of life for Nepal.  It is in Nepal’s permanent interest to put these relations on the firm foundations for all seasons. Nepal-China relations are no alternative to Nepal-India relations, and vice-versa. Nepal’s relations with neighbors and wider international community are independent of each other.

Chinese greatly value kaopu, meaning reliability.  Oli government must impress the Chinese leadership that irrespective of the political changes, Nepal’s China policy will always be based on the foundation of five principles of peaceful co-existence with a firm imprint of national consensus.

The challenge of political clarity and reliability looms larger than ever before. In 1960, BP Koirala told Premier Zhou Enlai, “Nepal-China friendship is of paramount importance for the peace in Asia in the first instance and the world peace in the last analysis.”  History is a witness to this. It is a moment to present Nepal’s views and positions with clarity and develop reliability for a secure and prosperous future of Nepal. Prime Minister Oli has that moment, if he wishes to seize it.

Joining Open Government Partnership will be a sign of seriousness of the current administration in building trust with local communities. Read More...