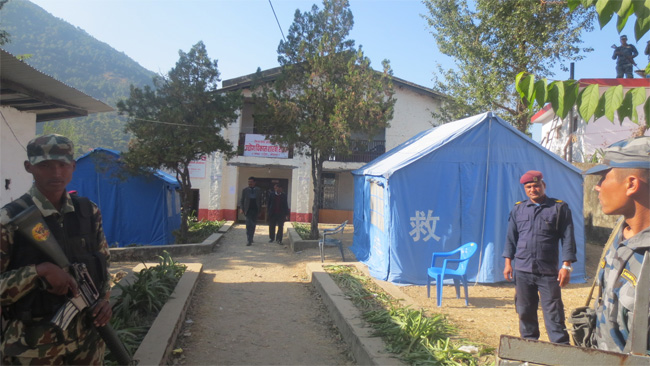 ROLPA, Nov 30: Even though the first phase elections to the House of Representatives and Provincial Assembly were over, the concerned body is facing a security challenge to the safe-keeping of the ballot boxes.

The ballot boxes have been stored at the Department of Cottage and Small Industry Development Committee in Libang.

According to Chief Returning Officer Basudev Lal Shrestha, the ballot boxes have been kept under the strict vigilance of security forces.

"The arrangement has been made to keep the collected ballot boxes under high-security vigilance," said Shrestha, adding, “the votes will only be counted after 5 pm on December 7. The security forces and concerned party representatives will be keeping a round-the-clock vigil on the ballot boxes until the time.”

The office of the chief returning officer along with the representatives of different political parties locked the room with the ballot boxes inside.

Besides the security forces, political parties have also deployed their cadres to keep vigil on the ballot boxes. In the eastern part of the building, the left alliance has put up its tent while on the other side democratic alliance has set up its tent.

The ballot boxes are kept in the three tiers of security. Nepal Police is in the first layer, Armed Police Force in the second layer while the Nepal Army in the third. Rolpa Police Chief Gyanendra Phuyal said that the police backed by Nepal Army personnel have been handed over the key of the door lock. He added that the locked door has also been equipped with a siren bell.

Local administration is worried about the possible damages mice may cause to the ballot papers. Chief District Officer Dr. Dijan Bhattarai said the ballot boxes were well-arranged. “If mice entered they would damage all the ballot papers,” he said.

The vote counting will take place at the hall of the cottage and small industry development committee’s building in the district headquarters Liwang. Chief District Officer Dr. Dijan Bhattarai said the administration will not let Chitwan incidents repeat.

KATHMANDU, Nov 28: Dismissing worries about the storage of ballot boxes of phase one parliamentary and provincial assembly polls for ten... Read More...

SINDHUPALCHOK, Nov 27: The local administration in Sindhupalchok district has arranged three-tiers of security for the ballot boxes sealed with... Read More...

Cabinet meeting: Japan's grant of up to Rs 2.61 billion accepted
21 minutes ago