KATHMANDU, Nov 28: Dismissing worries about the storage of ballot boxes of phase one parliamentary and provincial assembly polls for ten days, local administrations and political parties have said they have sealed the storage rooms in most of the districts with separate padlocks from each major political party. The ballot boxes have been kept under CCTV surveillance and guards from each political party have been deployed round the clock, in addition to the three-layer security provided by government security forces.

Local administrations have deployed Nepal Police, Armed Police Force and Nepal Army to provide security for the ballot boxes collected from all polling stations across the districts. Ballot boxes in some remote districts are expected to be brought to the district headquarters by Monday night.

Major political parties have sealed the hall of District Coordination Committee (DCC) of Baglung with padlock from each party, in addition to a padlock from the district election office. Also, representatives from various parties have been deployed to guard the hall round the clock. According to Chief Returning Officer Prakash Prasad Pandit, the ballot boxes have been sealed and locked inside the hall with padlocks from Nepali Congress, left alliance and Rastriya Janamorcha.

The major political parties have decided to deploy their guards for the security of the ballot boxes in Baitadi of far-west, in addition to sealing the storage rooms with their own padlocks. According to Chief District Officer (CDO) Siddha Raj Joshi, six rooms of Dasharath Chand Municipality have been sealed with padlocks from the local administration and the major parties after storing the ballot boxes.

In Sindhupalchowk district, the local administration has arranged a three-tier security for the ballot boxes and installed CCTV cameras to monitor the building of the District Agriculture Development Office, round the clock, according to the chief election officer in the district, Deepak Khanal. The administration has declared the area where 855 ballot boxes are locked as a prohibited area.

According to CDO of Gorkha, Basanta Raj Paudel, the parties and district administration have agreed to deploy a representative each from all parties to guard the sealed rooms round the clock for 10 days, in addition to the three-tier government security. Major parties have locked the storage rooms of the DCC with their own padlocks in addition to a padlock from the district election office. “We are also mulling to install CCTV cameras if needed,” the CDO added. The office of DCC was encircled with barbed wire after storing the ballot boxes inside the office on Monday.

Party representatives have demanded round the clock CCTV monitoring of the ballot boxes storage rooms in Taplejung district as well. In a meeting convened by the chief returning officer of the district on Monday, the representatives of major political parties demanded four CCTV cameras to monitor the storage rooms. “We should install CCTV cameras to ensure the security of the stored ballot boxes and it is not expensive, either,” said Radha Krishna Paudel of CPN-UML.

Ballot boxes have been brought to the district headquarters in most of the 32 mountainous and high hill districts after the conclusion of the first round of parliamentary and provincial assembly polls on Sunday. Ballot boxes were transported using choppers and hiring porters in remote areas.

According to Dhading CDO Shyam Prasad Bhandari, ballot boxes have been stored under strict security from security agencies, and are under the CCTV surveillance round the clock. The two major alliances led by the Nepali Congress and CPN-UML, respectively, have locked the storage rooms with their own padlocks, according to CDO Bhandari. “We have asked the party representatives to come with the keys of their padlocks after the second phase of polls concludes on December 7,” he said. 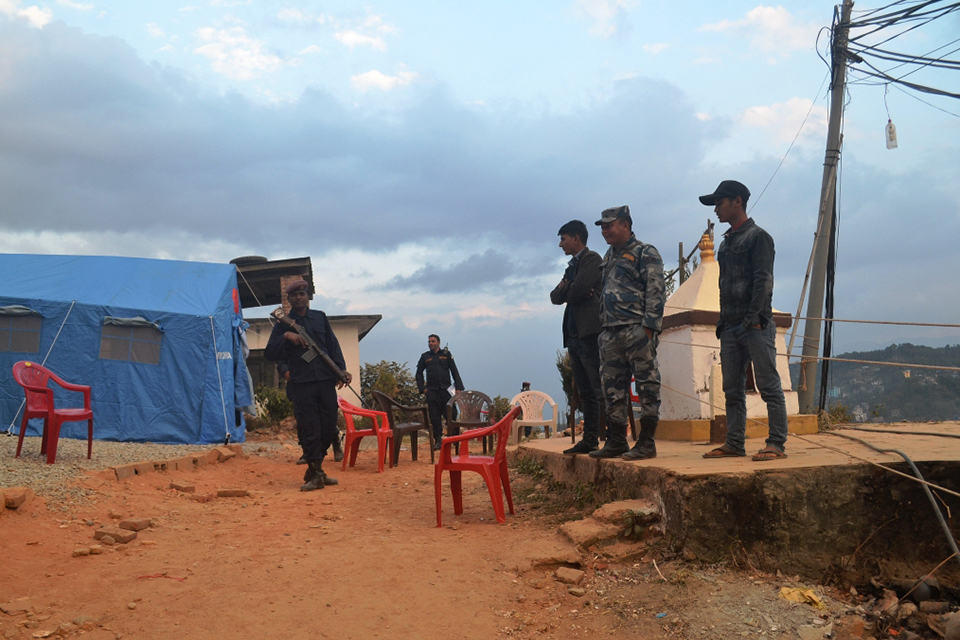 ROLPA, Nov 30: Even though the first phase elections to the House of Representatives and Provincial Assembly were over, the... Read More...

SINDHUPALCHOK, Nov 27: The local administration in Sindhupalchok district has arranged three-tiers of security for the ballot boxes sealed with... Read More...

KATHMANDU, May 14: As the election hour for voting comes to an end, the ballot boxes are being collected from... Read More...