Scoring becomes key as Spain and Poland meet at Euro 2020 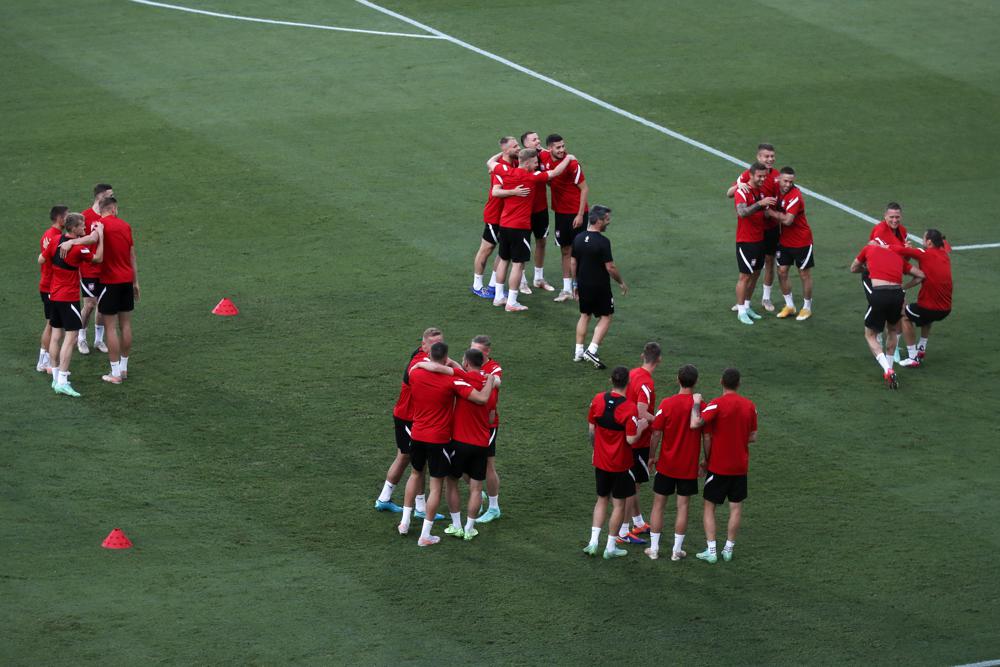 Poland players joke as they practice during a training session at the La Cartuja stadium in Seville, Spain, Friday, June 18, 2021. Poland will play against Spain on Saturday for the Group E of the Euro 2020 soccer championship. (Jose Manuel Vidal/Pool via AP)

SEVILLE, Spain, June 19: Spain and Poland will have a common challenge when they meet Saturday at the European Championship.

Spain created chance after chance against Sweden but was still held to a 0-0 draw in its opening match at Euro 2020. Poland lost to Slovakia 2-1 as Robert Lewandowski was held scoreless in yet another lackluster performance at a major soccer tournament.

The focus on Spain at La Cartuja Stadium will be on Álvaro Morata, the striker singled out by fans and Spanish media for his misses against Sweden. He had also been ineffective in Spain’s warm-up match against Portugal, which also ended in a scoreless draw.

Spain coach Luis Enrique said Friday he will keep Morata in the team despite all the criticism.

The coach pulled out a list of statistics to back his decision to stick with Morata, showing how he’s the player with some of the most prolific scoring numbers at this point in his career both in Spain and internationally.

Morata shrugged off the jeers against him, saying “you can’t please everyone and you have to accept when you are criticized.” He said he has had a “long-enough career” to know that the opinions of others don’t affect him.

“I’ll just keep working as hard as possible,” he said. “I can’t wait for the match tomorrow (Saturday).”

Luis Enrique’s other choices in attack include Dani Olmo and Ferran Torres, who started alongside Morata against Sweden, and Gerard Moreno, Mikel Oyarzabal, Adama Traoré and Pablo Sarabia.

Spain got some good news on Friday with the return of captain Sergio Busquets, who rejoined the squad after a period of isolation following a positive test result for the coronavirus.

Luis Enrique said Busquets showed no symptoms of the virus while in isolation and was able to practice at home. He said the veteran midfielder, the only player left from Spain’s World Cup-winning squad in 2010, is in condition to play on Saturday.

“He was away but it was as if he had been here,” Luis Enrique said. “You can tell that he is our captain.”

Poland’s path to victory will likely have to go through Lewandowski, who hasn’t fared well with his national team at major tournaments despite undisputed success throughout his career at club level. He is coming off a record-breaking season with Bayern Munich, but again failed to impress with Poland in the opener against Slovakia.

“Robert made a lot of things against Slovakia,” Sousa said. “When we became with 10 men he worked a lot defensively. He works a lot without the ball.”

Lewandowski has only two goals in 12 matches with the national team at either a World Cup or a European Championship. But Spain isn’t taking it for granted that he’ll have another poor performance.

“Lewandowski remains the main threat for them in attack,” Sarabia said. “We all know what kind of season he has had. He is a reference worldwide. We will try to make him as uncomfortable as possible so he can’t have a good game.”

Sarabia said it wouldn’t be a surprise if Poland came out playing as defensively as Sweden did to try to contain Spain’s attack, which had 17 total attempts on Saturday.

“It’s difficult when they set up 10 players plus the goalkeeper on their own field,” Sarabia said. “We need to try to find spaces little by little.”

Spain hopes to find better field conditions at La Cartuja after saying the grass made it difficult for its players to control the ball in the match against Sweden.

“The field is what it is,” Luis Enrique said. “It’s obvious that it could’ve been better, but it won’t be an excuse for us. We are focused on what we can control, and we don’t have control over the field. There are before working hard to make sure it improves.”

Poland, winless in its last four matches, will be without midfielder Grzegorz Krychowiak, the former Sevilla player who was sent off in the second half against Slovakia in St. Petersburg.

VALENCIA, March 24: Spain captain Sergio Ramos scored another “Panenka” penalty to give his side a 2-1 home win over Norway... Read More...

More than half of bottled drinking water is unfit for consumption: Govt report
20 hours ago

Lack of vaccination, tests creates room for variants in Nepal
12 hours ago